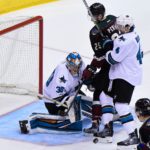 Igor Eronko: Toronto Maple Leafs coach Mike Babcock has already spoken with KHL Konstantin Okulov. Not sure if the Maple Leafs will eventually be team to sign Okulov.

If Hall becomes available, would the Avs or Predators be interested?

Kevin Allen of USA Today: The Colorado Avalanche have the salary cap space to add a player or two.

The New Jersey Devils struggles could mean the end of forward Taylor Hall and head coach John Hynes in New Jersey. The Devils will continue to try and convince Hall to stay, but the slow start isn’t helping.

If they Devils feel they can’t extend Hall, they have to trade him. What about the Avalanche or Nashville Predators?

Sharks could make some moves to their blue line

Kevin Kurz of The Athletic: (mailbag) When Sen Jose Sharks defenseman Dalton Prout gets healthy (and Radim Simek), he could replace Tim Heed, who could drop down to eighth on their depth chart. Heed could end up on waivers.

Trading Brendon Dillon right now doesn’t make sense, but if the Sharks are out playoff race before the deadline, they could look at moving the pending UFA. If were part of management, would be looking at how to re-sign him.

Could see the Sharks considering trading defenseman Marc-Edouard Vlasic, especially if they’d like to re-sign Dillon. Vlasic has a full no-movement clause and carries a $7 million cap hit for the next six years. He is not eligible for the expansion draft. Would Vlasic consider a move to the Montreal Canadiens, who are said to be looking for a left-handed defenseman?

Aaron Dell‘s backup job may be safe for now, but Josef Korenar could become an option at some point.

The Sharks aren’t really in a position to make a big trade. They need their best players to play better. They could look to add a forward at some point, but that may not happen until closer to the trade deadline. The Sharks don’t have a lot of salary cap space.