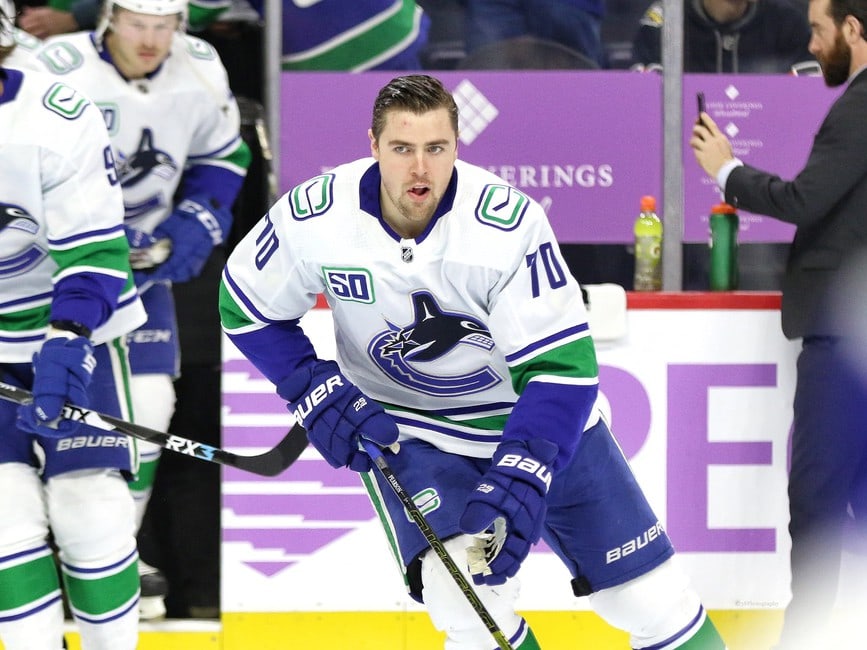 VANCOUVER — It was a good way for the Vancouver Canucks to head into the NHL All-Star break.

Tanner Pearson scored on the power play and had an assist as the Canucks outshot the San Jose Sharks 39-18 during a 4-1 victory Saturday night.

The win was the 11th in 14 games for the Canucks (27-18-4) and extended their home winning streak to eight games. Vancouver also moved into first place in the tight Pacific Division with 58 points, one more than Edmonton, Calgary, Vegas and Arizona.

“Going into the break in a playoff spot is big,” said Pearson. “We’ve got to keep it strong here at home (and) become a better road team here on out.”

Eriksson, who has three goals in his last seven games, said with the playoff race so close there won’t be many easy games down the stretch.

“It’s gong to be like this through the rest of the games,” he said. “Tight games and every game is going to be big to get points.”

Barclay Goodrow scored for the Sharks (21-25-4) who lost their third consecutive game.

In past years Vancouver might have got frustrated and let the Sharks back in the game. Instead the Canucks stuck to their game. Even after Goodrow scored to make it 2-1, Hughes responded 37 seconds later.

“In a game like that, you’re peppering their goalie,” said Pearson. “He’s saving them all and they’re not getting any shots. It usually can go one way or another. Good thing it went our way tonight.”

The win over San Jose comes after a good defensive effort in a 3-1 win over Arizona Thursday night.

“That was top to bottom another good game,” said head coach Travis Green.

“The last two games at home were pretty complete games by our group. We talked about being a committed group, resilient, and we were tonight.”

The Sharks had won back-to-back games at home before losing on the road to Arizona and Colorado before heading to Vancouver. San Jose was outscored 14-4 in the three losses and 8-1 in the last two games.

“We pretty much didn’t show up the whole game,” said goaltender Aaron Dell, who made 35 saves.

“We just stopped everything that was successful. This is pretty much the ramifications of that. I don’t know why it changed or when it changed.”

Forward Kevin Labanc said frustration led to a melee late in the game that saw 60 minutes in penalties handed out.

“We all just want to win so badly,” said Labanc. “We’re kind of stuck in the mud right now.

“It’s not fun. Tension builds. Next thing you know stuff like that happens.”

He admitted the lack of work made it a long night.

“It’s a little tricky, just to stay in it,” he said. ‘But in those games, you’ve just got to be ready for whatever comes.

“I didn’t see our team take the foot off the gas at all so it was great to see.”

Canuck captain Bo Horvat announced on social media that he and his wife are expecting a baby. … Vancouver’s longest home-ice winning streak was 11 games between Feb. 3 and March 19, 2009. … The Sharks’ Joe Thornton played his 1,616th game to pass Larry Murphy for 10th place in NHL history. … San Jose forward Marcus Sorensen was a healthy scratch for the first time this season. … The teams played four minutes, 11 seconds of the first period before a whistle.

This report by The Canadian Press was first published Jan. 18, 2020.