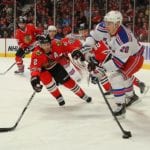 Rick Carpiniello of The Athletic: New York Rangers pending UFA Chris Kreider is looking for a seven-year deal at around $7 million per season.

The Rangers asking trade price for Kreider has to be a first-round pick, or multiple conditional second-round picks, or legit young players or prospects. The Rangers are fairly deep with their prospects on the blue line and in net, so they’ll be looking for forwards and/or picks.

Potential teams that could be interested in, or could use Kreider, include the New York Islanders, Pittsburgh Penguins, Boston Bruins, Tampa Bay Lightning, St. Louis Blues, Colorado Avalanche.

Duncan Keith holds the power with this no-movement clause

Mark Lazerus of The Athletic: Chicago Blackhawks defenseman Duncan Keith holds the power with his full no-movement clause. He’s not afraid to use it.

“For sure, it would be something I’d exercise,” he told The Athletic on Friday. “I have that control. I have the ability to do that.”

Would he consider moving on to a contender if approached by GM Stan Bowman?

The Blackhawks are still in the playoff hunt but it hasn’t stopped Keith’s name from coming up in the trade speculation. Keith would be a good fit for the Florida Panthers, Toronto Maple Leafs, Edmonton Oilers, and Carolina Hurricanes.

Keith may be their best trade chip for adding picks and prospects, but it’s unlikely that he’s going anywhere.

Keith said that nobody has asked him this year about waiving his NMC, and despite reports, nobody asked him last year.