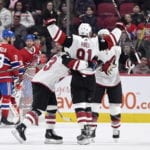 “I want to make the playoffs with the guys here,” Hall said. “I don’t want to go anywhere else.”

Coyotes owner Alex Meruelo said last week that they are willing to hold on to Hall past the trade deadline and are hopeful Hall would be open to remaining in Arizona long-term. Hall has stated again that any talks will wait until after the season.

“I want to play here for the rest of year,” Hall said.

Coyotes GM on the trade deadline …. Potential trade targets for the Coyotes

Craig Morgan of The Athletic: Arizona Coyotes GM John Chayka on if they’ll be buyers or sellers.

“If I never made a deadline trade it would be good with me,” Arizona’s general manager said. “We’ll have discussions and evaluate everything but in my opinion, the majority of those trades don’t work out as teams would like them to so we have tried to avoid them. But again, there is some value to them so we’ll see if there is some value to extract.”

The Coyotes don’t have a lot of salary cap space but Chayka said there can be ways to improve the team and added “the cap has never handcuffed us.”

If the Coyotes were to add someone, they would likely have to move someone out. Potential trade candidates could include Michael Grabner, Carl Söderberg, Vinnie Hinostroza, Christian Fischer, Brad Richardson, Jordan Oesterle, Alex Goligoski, and Jason Demers.

Adding a center and a physical, right-handed defenseman could be areas they look to improve on.