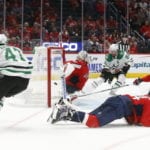 Renaud Lavoie: Montreal Canadiens GM Marc Bergevin is still in Denver and will be watching the Avalanche – Islanders game tonight.

Samantha Pell: Washington Capitals GM Brian MacLellan on if the Capitals will make any other trades before Monday’s trade deadline: “We’re going to pursue anything we think can make us better. We’ll continue to talk to teams. We’ve had conversations as we’ve had with the defense and we’ll keep doing it and see if we can make our team better.”

J.J. Regan: Capitals GM MacLellan on pending UFA goaltender Braden Holtby: “I think our story’s been the same the whole year, that he’s our guy and we’re going to try to compete for a Cup. I think we want him at the top of his game at the end of the year.”

Stars could make a ‘small’ deal by Monday … a forward that has some offense?

Sean Shapiro: After talking to Dallas Stars GM Jim Nill about the high price that teams paid to acquire defenseman, don’t get the sense the Stars are going to trade from their surplus of defensemen.

Nill said that if an offer “blows his socks off” they would consider it. He’s not 100 percent ruling it out.

Mike Heika: Guess that the Stars will make a small deal closer to the deadline.

Believe they would like to add a skilled forward if they can find one at the right price.

Mike Heika of NHL.com: (mailbag) Think the Stars could do well by adding a scoring forward, one that can also play the other side of the puck as well.

Any play on a bigger named forward like Jean-Gabriel Pageau, Anthony Duclair or Chris Kreider would likely need to include a first-round pick – so would have to be for 2021 for the Stars.

Don’t think the Stars would be interested in moving top prospects like Thomas Harley, Jake Oettinger or Jason Robertson