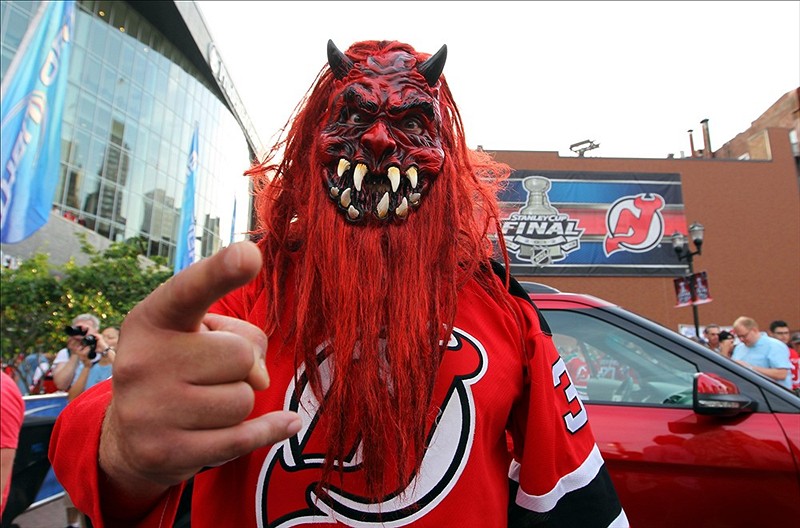 The best team in the history of the New Jersey Devils franchise never even won a Stanley Cup if you can believe that about a team that has not one, not two, but three championship titles under their proverbial belts. But they came about as close as you can come without winning, and if they did they would have captured the Cup in back-to-back seasons.

The 2000-01 Devils had a better season than each of the three Cup seasons saw the franchise have as they shed the label of being a defensively boring team, even though the uneducated would still refer to them like that (and sometimes still do. There was no Cup Hangover for this team like there was with the 1995-96 Devils, instead, they scored 295 goals, tops in the entire NHL. And yeah, they were still good defensively too by only allowing 195 goals which were second-least in the league. Only the Dominik Hasek-led Buffalo Sabres gave up fewer (185).

Patrik Elias had his pinnacle season as a pro in which he had 96 points (40g-56a) and was one of two 40-goal scorers on the squad (Alexander Mogilny, 43). Elias’ 96-point season was good enough for third in the entire NHL behind only Jaromir Jagr (121) and Joe Sakic (118). No other Devil had ever finished higher in the Art Ross Trophy Standings. Elias’ 96 points is still a team record, his 56 assists that season is still tied for fourth in team history. Mogilny’s 43 goals are fifth on the club’s all-time list.

Behind the bench was Larry Robinson who took over with eight games left in the previous season and guided the club to its second Stanley Cup and he was a magician at blending together the roster that was mixed with cagey vets like Ken Daneyko, Scott Stevens, and Martin Brodeur with upcoming, young talented players like Scott Gomez, John Madden, and Brian Rafalski.

Brodeur finished with 42 wins and the team excelled powered by Elias’ A-Line (Petr Sykora, Jason Arnott). Scott Niedermayer and Arnott each missed over 20 games and the team didn’t miss a beat, they actually got better as the season went on – ripping off an 11-game win streak from late February to late March. A total of 15 different players had game-winning goals that season for the Devils.

In the Stanley Cup Final, they held a 3-2 series lead after a pivotal game 5 win in Colorado but only managed one goal in the next two games (outscored 7-1) as the Avalanche won their second Cup in franchise history. The Devils were exhausted after playing deep into June the previous season and it showed in Game 7 when Sakic steamrolled Stevens along the boards in some captain-on-captain violence. A fresher version of New Jersey’s captain would never had let that happen, but that’s how it goes sometimes.

It is close though, when trying to determine the franchise’s best team ever. There are obviously the other three Cup-winning teams in the mix, with the 1995 team slightly below the other two. Mainly because they stumbled through the lockout-shortened season and entered the Stanley Cup playoffs as the fifth seed. The 2003 Cup team was really close to being as dominant any other team in franchise history, but they weren’t nearly as exciting.

Two of the other top teams in franchise history that didn’t win a Cup include the 1993-94 Devils who came one game away from advancing to the team’s first Cup Final and finished with the second-most points in the NHL. That team finished second in the NHL in Goals For, behind only the rival New York Rangers and were led by Scott Stevens’ 78 points (18g-60a).

The 2006-07 team that was cruising along atop the NHL standings until GM Lou Lamoriello fired head coach Claude Julien with just three games left in the regular season. It was the franchise’s last season before moving to Prudential Center in Newark and Julien had guided them to a 47-24-8 mark. Zach Parise was in his second NHL season and recorded the first of five consecutive 30-30 seasons with New Jersey. But in the playoffs they were dispatched by the lower-seeded Ottawa Senators in five games, losing the final game at Continental Airlines Arena 3-2.

Which team do you think was the best in the history of the New Jersey Devils franchise? Which was your favorite team? Let us know in the comments below.