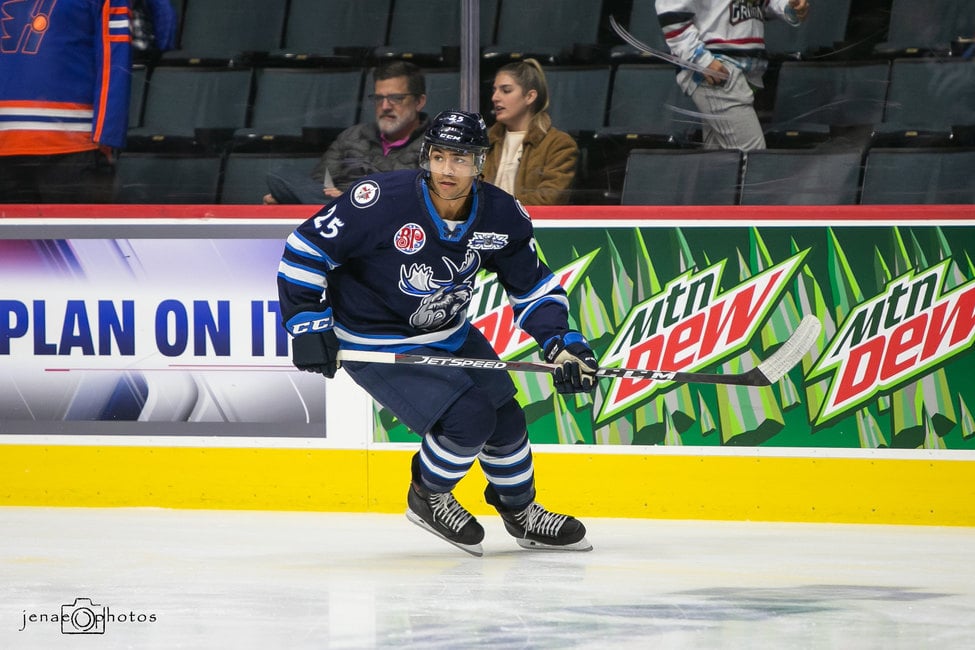 The Manitoba Moose found success fleeting in February, posting a 4-6-1 record in February as they struggled to find any consistency and adapt to injuries and call-ups.

The Moose began the month by wrapping up a four-game home stand against the Chicago Wolves. Their long-time rival got the best of them, 5-2, thanks to three goals in a less than six-minute span in the second period.

The Moose and Wolves hooked up for two more games later in the week at Bell MTS Place — the first two of a six-game home stand — which they split. The Moose won the first contest by a 3-2 score, with CJ Suess scoring the game-winner on a power play beauty with less than four minutes to go.

The next evening, the Wolves exacted some revenge. The Moose battled hard but ended up on the wrong side of a 2-0 score on the night they raised former captain Jimmy Roy’s #21 to the rafters and celebrated 20 years of Moose hockey in the Manitoba capital.

Your Kingdom for a Goal?

Underachieving on offence has been the Moose’s single biggest problem this season — they sit near the bottom of the AHL with 150 for. Players such as Kristian Vesalainen and Michael Spacek, who have been tasked to produce to a greater degree with Logan Shaw and Jansen Harkins up with the Jets, have been inconsistent.

That lack of ability to put pucks in the net hurt them big-time in two games against the Rockford IceHogs, one of the teams they desperately needed to gain ground on in the Central Division. They scored just three goals in a two-game set, losing 2-1 and 5-2 respectively.

The goal scoring woes continued as the class of the AHL, the Milwaukee Admirals, rolled into Manitoba 31 points ahead of their opponent. However, the Moose grabbed a 1-0 win in the first of two match-ups thanks to 35 saves from Eric Comrie and a gorgeous third-period on-the-rush goal from Brent Petersen. The Moose could have definitely scored more than one in the contest as they also clanked four posts.

The home stand concluded with a special matinee Monday matchup for Louis Riel Day. Dubbed “Superhero Day,” the Moose weren’t super at all in front of a sellout crowd: they were awful defensively and gave up a number of egregious turnovers, which culminated in allowing three second-period goals in a 3:46 span. That was more than enough for the Admirals as they coasted to a 4-1 victory.

The team finally found their scoring touch as they headed east for the first of two against the Laval Rocket. In a back-and-forth Wednesday matchup, the Moose found themselves down 4-3 in the late third after relinquishing an early 2-0 lead. Michael Spacek scored the tying goal with 1:18 left in the third and after overtime solved nothing, Seth Griffith scored the shootout’s lone goal to complete the 5-4 comeback.

The Rocket exacted some revenge in the next match up, however, capturing a 4-1 victory.

Wrapping things up in Belleville against the Senators, the Moose blew their chance to go 2-1 on the trip. They built up a 3-0 lead but gassed it and later gave up a 4-3 lead with just 34 seconds to go in the third. The combination of CJ Suess and Reichel was a force to be reckoned with, however: Reichel scored two goals and Suess had three assists.

Alex Formenton brought the home side to victory 2:01 into the extra frame, leaving the Moose with just a single point and their first overtime loss of the season.

Ending the Month Off Right

In their final game of the month, the Moose again relinquished a late one-goal lead, this time to the Wolves’ Paul Cotter with 2:24 to go (although the tally probably shouldn’t have counted as Mikhail Berdin was bowled into, which dislodged the puck that was under him and pushed it over the line.)

Unlike in Belleville, however, the Moose prevailed in overtime. Leon Gawanke was the hero, going from end-to-end in the three-on-three and snapping a puck by Oscar Dansk.

The Moose sit in last place in the Central Division and eight points behind fourth-place Rockford with just 18 games to go. However, all their games are against divisional opponents, so they still have a chance of qualifying for the playoffs if they can somehow find a way to rattle off a number of consecutive victories.

They’ll play a dozen games in March — they have three games left in their current home stand, one more against the Wolves and two against the Iowa Wild. Then they will embark on a six-game road trip between March 13 and March 23, visiting Milwaukee and Chicago before hitting up Cedar Park and San Antonio.

They’ll return home for the remainder of the month and welcome the Texas Stars for two before the Admirals return to wrap the month.