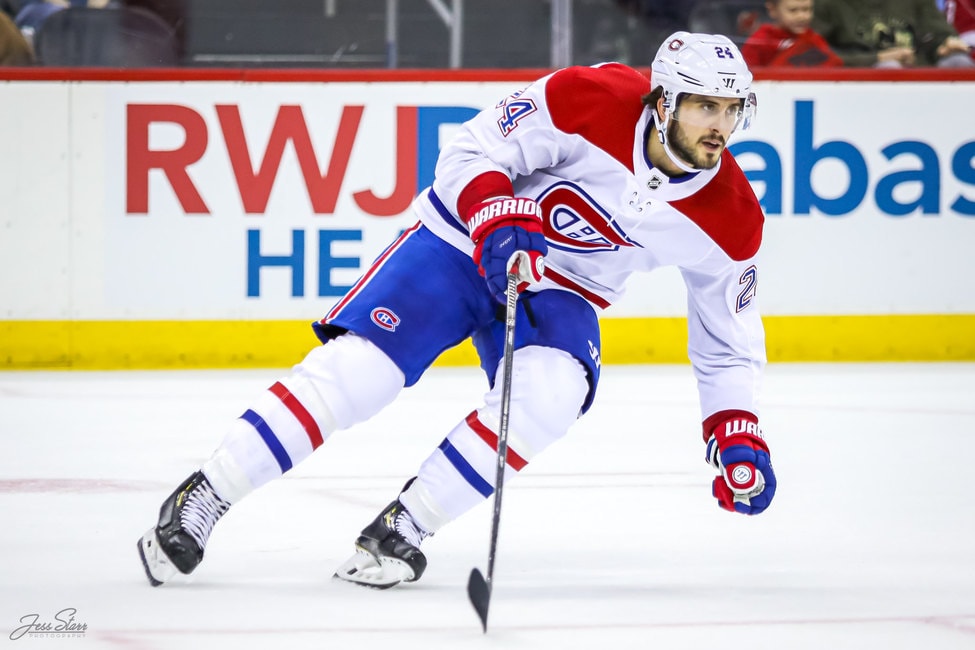 For a second straight season, Phillip Danault of the Montreal Canadiens is in contention for the Frank J. Selke Trophy, awarded to the best defensive forward in the NHL. After finishing seventh in voting last year, the 27-year-old is worthy of being a Selke finalist for the first time in his career following a stellar 2019-20 campaign.

Danault has become one of the best two-way players in the league. In an article for The Athletic, Pierre LeBrun referred to Danault as a throwback shutdown centre extraordinaire who would have had a better chance to win the Selke in the ‘80s or ‘90s because his offensive production is behind his closest competitors (from ‘LeBrun: NHL coaches make their Selke Trophy picks and inside the Calder debate’, The AthleticNHL – 06/15/20).

Still, Danault was on pace to post a career-high in goals and points before the COVID-19 pause. In 71 regular season games, he put up 13 goals and 47 points in addition to maintaining a plus-18 rating while being matched up against the opposing teams’ most prolific players on a nightly basis.

His 43 points at even strength rank him 16th in the NHL among centremen, one point ahead of last year’s Selke winner Ryan O’Reilly of the St. Louis Blues. Danault also sits ahead of Elias Pettersson (42), Aleksander Barkov (41), and John Tavares (39). Not surprisingly, the Victoriaville, Quebec native was vital to Montreal’s penalty kill. He had the third-most shorthanded ice time among centres with 178:12. Plus, he took 1,336 faceoffs this year and won 728 of them, numbers which place Danault sixth in the NHL in both departments.

A Dominant First Line for the Canadiens

Over the past two seasons, Danault has pivoted one of the most effective top lines in the league with Brendan Gallagher and Tomas Tatar on his wings. Tatar led the Canadiens in scoring with 61 points while Gallagher potted 22 goals in 59 games with Danault as their centreman. While his wingers provide the trio’s offensive spark, Danault is their defensive pillar.

Marc-Antoine Godin of The Athletic wrote an article making a case for why Danault should be a Selke finalist using a plethora of advanced stats to highlight the dominance of the Habs’ first line. More specifically, how Danault’s impressive puck possession numbers and ability to control shot attempts while facing the stiffest competition positively impacts his team.

Godin is one of several media members who have already divulged that they put Danault on their ballot for the Selke Trophy.

Danault and his linemates will be key players for the Canadiens if they hope to win their play-in series against the Pittsburgh Penguins. Not only will they be expected to produce offensively, but they will also be tasked with shutting down Sidney Crosby and former 40-goal scorer Jake Guentzel, who is expected to return from shoulder surgery. Not to mention, Danault’s role on the Habs’ penalty kill means he will have to defend Evgeni Malkin as well.

A Great Trade by Marc Bergevin

Danault was acquired on Feb. 26, 2016, from the Chicago Blackhawks, a deal which is arguably Marc Bergevin’s best trade as general manager of the Canadiens to date. Montreal also received a 2018 second-round pick, which turned into top defensive prospect Alexander Romanov, in exchange for Tomas Fleischmann and Dale Weise.

Not only did Bergevin get a player in Danault who has become one of the top shutdown centres in the NHL, proving more than capable of playing on the team’s first line, but he also brought in a Quebec-born athlete who has really blossomed and reached his potential while playing for the Habs.

Danault is set to become an unrestricted free agent at the end of the 2020-21 season and signing him to a new contract should be high on Bergevin’s priority list in the coming months.

If Danault does win the Selke at some point in his career, he would become just the third Canadien to have his name etched on the prestigious trophy, following in the footsteps of four-time winner Bob Gainey and three-time recipient Guy Carbonneau, both members of the Hockey Hall of Fame.

While Danault may not take home the Selke Trophy this year, the numbers he put up in 2019-20 thanks to strong play in all three zones certainly make him a very deserving first-time finalist. For a player who often flies under the radar and whose contributions to his team are sometimes understated, this recognition would validate Danault’s growing value around the league and especially with the Canadiens.