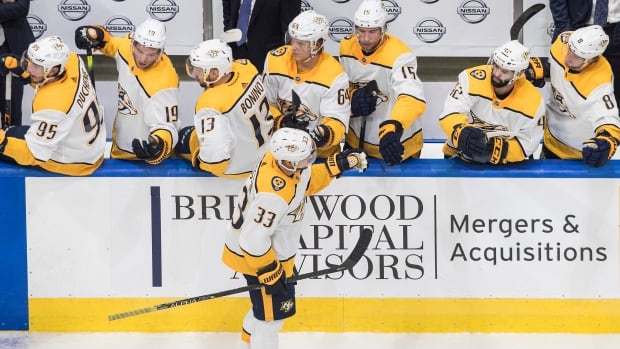 Viktor Arvidsson supplied all the offence, and Juuse Saros and Pekka Rinne combined for the shutout as the Nashville Predators blanked the Dallas Stars 2-0 on Thursday in exhibition action.

Arvidsson opened the scoring 3:53 into the game for the Predators and doubled the lead at 8:52 of the second.

Filip Forsberg picked up an assist on both goals.

Saros started the game and stopped 12 shots before Rinne entered and made 14 saves, with the two goaltenders equally splitting ice time.

Photographer Dave Sandford gives insight into what life is like inside the NHL bubble for teams and players in Edmonton. He says everyone is taking the rules surrounding the pandemic very seriously.  9:21

Ben Bishop stopped 16-of-18 shots in 30 minutes of action for the Stars before giving way to Anton Khudobin, who turned away all nine shots his way.

Nashville starts a best-of-five playoff qualification series with the Arizona Coyotes on Sunday.

Dallas plays its first game of the seeding tournament among the top four Western Conference teams against the Vegas Golden Knights on Monday.

Vegas and Arizona were scheduled for an exhibition tilt in Edmonton later Thursday, while the Boston Bruins and Columbus Blue Jackets were to meet in Toronto.