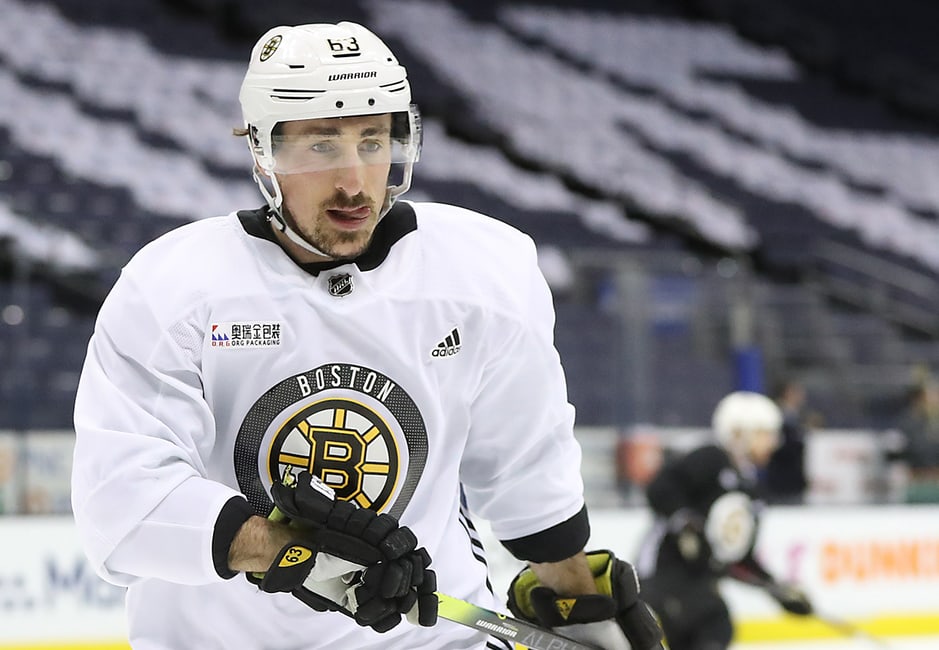 In today’s NHL rumor rundown, the Boston Bruins are hoping an injury to Brad Marchand isn’t too serious. He left an exhibition game and is questionable for Sunday. In Calgary, one scribe tries to explain the chatter surrounding Johnny Gaudreau, and in Vancouver, why is everyone passing Jake Virtanen on the depth chart? Finally, what was the deal behind David Pastrnak’s odd tweet about Tom Wilson?

Joe Haggerty of NBC Sports Boston notes that Boston Bruins forward Brad Marchand left Thursday’s game in the third period with what appeared to be a lower-body injury. It’s not entirely clear when the injury happened as it could have been when he fell awkwardly but he was shown on replay skating gingerly before leaving.

“He left ,” said Bruce Cassidy. “I don’t think it’s anything serious, but we’ll have a better idea obviously in the morning.”

Cam Neely didn’t give an update on Marchand’s status during an interview with NESN but did say that the Bruins will have to find the right use of players going forward during the round-robin portion of this postseason.

Earlier this week, Bruins forward David Pastrnak caught some attention with a tweet that went viral. He wrote, “In my opinion Tom Wilson is the best goal scorer in the league.”

While Wilson is a skilled player, to say he’s the best scorer in the NHL is a bit of a stretch and some had wondered if maybe Pastrnak had lost his phone or someone was pranking him.

Pastrnak explained the post after the Bruins’ exhibition game on Thursday evening saying, “I just felt like it.” According to NHL’s Amalie Benjamin, Pastrnak said, “I wanted to say it. It was my opinion. Nobody hacked my Twitter. It was all me and it was my own fingers typed that in.”

Then, things became a lot clearer when he said, “It was a little side bet with Tom from back in the day.”

Wilson also commented on the tweet before the Capitals’ exhibition game against the Hurricanes and said, “shenanigans have begun.”

Clearly, players have already begun to get bored in the bubble.

More on Jake Virtanen Not In Canucks Lineup

It was asked on Wednesday why Jake Virtanen was sitting during the Canucks loss against the Winnipeg Jets and GM Jim Benning said the team wanted to get a look at Micheal Ferland. Now, it appears not just Ferland has passed Virtanen on the depth charts.

Iain MacIntyre of Sportsnet writes that Loui Eriksson appears to have passed the 23-year old and coach Travis Green said “I just went with the lineup that I thought gave us the best chance to win. Plain and simple.”

Part of the reasoning could be that Virtanen doesn’t kill penalties and that he can be a defensive liability at times.

Scott Cruickshank of The Athletic discusses the trade speculation surrounding the Calgary Flames in a recent mailbag segment. Looking at buzz regarding Johnny Gaudreau, he noted that the winger’s time in Calgary may not necessarily be over.

The 26-year-old has two years left on his contract and there’s plenty of talk the Flames might look to move him if he struggles again in this year’s playoffs. But Cruickshank notes that Brad Treliving isn’t actively shopping him and his $6.75 million annual average salary.

One thing Cruickshank did say was:

Now, is he a potential trade chip? Of course. Everybody is….

He won’t sign elsewhere — allowing him to walk would be rotten asset management. Meaning the Flames either deal him or extend him.