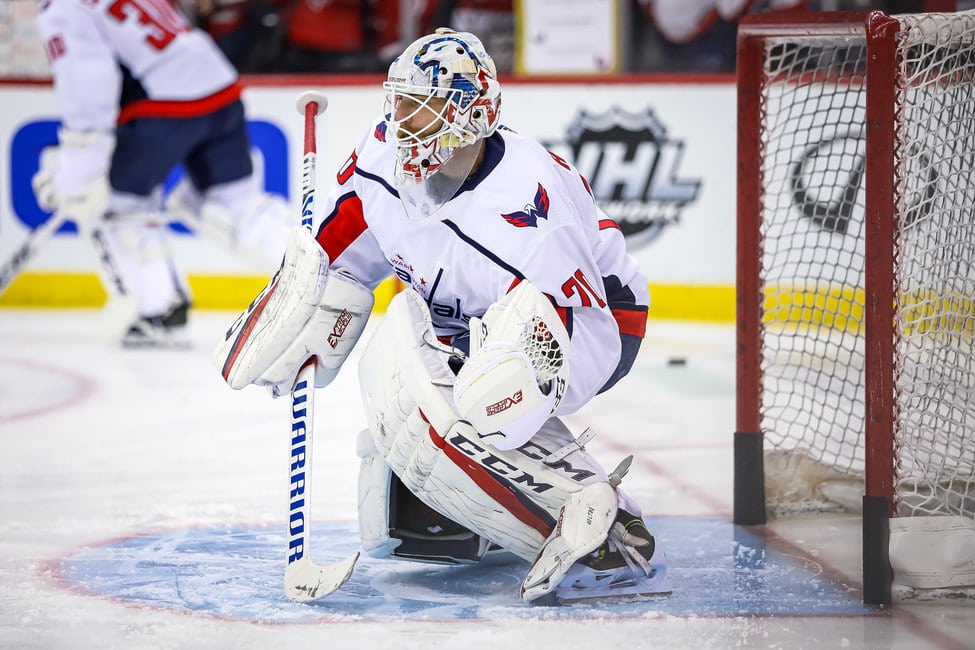 All things considered, the situation could be a lot worse for the Washington Capitals as the Eastern Conference’s third seed prepares to take on the seventh-seeded New York Islanders and their former head coach Barry Trotz in the first round of the 2020 NHL Playoffs on Wednesday in Toronto.

With defenseman John Carlson, arguably the team’s best player and a Norris Trophy finalist, sitting out all three games of round-robin play, the Capitals put together a 1-1-1 record. They allowed just six goals including a strong overall defensive performance in a 2-1 win against the Boston Bruins on Sunday to earn the third seed and the matchup against the Islanders.

A loss in that game would have meant a first-round rematch with the Carolina Hurricanes who eliminated the Caps in seven games last season and were extremely impressive in their qualifying-round sweep of the New York Rangers.

Getting it Done Without Carlson & Eller

Given the absence of Carlson and third-line center Lars Eller, who missed two round-robin games to be home for the birth of his second child, the Capitals couldn’t have asked for much more in terms of their overall performance and seeding.

Facing Trotz, who is one of the league’s most respected coaches, isn’t an easy assignment. He is extremely familiar with the Caps’ personnel after leading the franchise to their first Stanley Cup in 2018, but there is no debating that the Hurricanes are a deeper and more talented team on paper than the ‘Canes team that eliminated them a year ago.

The Islanders won their qualifying-round matchup against the Florida Panthers in four games, and while New York is disciplined defensively and known for limiting scoring opportunities, they also lack the scoring punch and offensive depth of the Hurricanes.

Of course, games aren’t won on paper, and the Caps-Islanders series figures to be an intriguing chess match featuring players and coaches who know each other well. Here are five reasons Caps fans should feel good about their team’s chances in the first round:

Coming off the worst statistical season of his career, and possibly playing his last games for the Caps after 10 years in D.C., pending unrestricted free agent, Braden Holtby has played a large role in the Capitals’ strong defensive showing since the team entered the Toronto bubble on July 26.

Holtby played two periods in Washington’s 3-2 exhibition-game victory against Carolina, stopping 12 of 13 shots, and was between the pipes for all 185 minutes of round-robin play. In those contests, he stopped 74 of 80 shots, good for a .925 save percentage (SV%) and a 1.98 goals-against average (GAA).

Throw in the exhibition game and his GAA drops to 1.87. Compare those numbers to the .897 SV% and 3.11 GAA he posted during an inconsistent regular season. Perhaps more important than the numbers, though, has been Holtby’s steady improvement throughout the tournament.

He allowed a bit of a leaky goal against Carolina, but was otherwise solid in the pre-tournament contest, and was steady in a 3-2 shootout loss to the Tampa Bay Lightning, making 26 saves. Against the Philadelphia Flyers in the Caps’ worst defensive showing, a 3-1 loss, Holtby kept his team within striking distance by making multiple acrobatic saves on odd-man scoring opportunities. Each of the three goals he surrendered in that contest was a direct result of a defensive breakdown and not his fault.

Holtby concluded round-robin play on Sunday against the Bruins with his best all-around performance, stopping 30 shots and making some big third-period saves in a 2-1 victory.

“He’s for sure been our best player,” Capitals forward T.J. Oshie said in an Aug. 10 media session. “That’s no question. I think he’s tracking the puck very well. I’m not a goalie coach, so I can’t tell anything about his mechanics, but it seems like he’s seeing the ice and seeing the game really well. He’s anticipating right. He’s making huge saves at big times for us.

There haven’t been too many scrambles in front of our net – there’s been a couple – but for the most part he’s doing a really good job of swallowing up rebounds and making it really easy on our defensemen and our centermen to not give (opponents) any second or third opportunities.”

Buoyed by Holtby’s strong play in goal, the Capitals’ defense has improved statistically – and especially in front of their own net – during the postseason. After allowing 3.07 goals and 30.2 shots per game during the regular season, they surrendered just 2.0 goals per game and 26.7 shots per contest in round-robin play.

Those numbers don’t include Carlson who was sidelined throughout the tournament by an undisclosed injury. He continues to practice with the team and remains a game-time decision for Game 1. The defensive breakdowns in the loss to the Flyers were committed by Radko Gudas, Carlson’s replacement, and center Evgeny Kuznetsov.

Gudas was replaced against Boston by rookie prospect Martin Fehervary, who logged almost 16 minutes of ice time and led the team in hits. He also added some life to the Caps’ second power-play unit and is more similar to Carlson in playing style than Gudas is, so it wouldn’t be surprising to see him alongside Michal Kempny against the Islanders if Carlson remains unfit to play.

Our defensive side and our pressure backchecking and our defensemen have all been really good.

The encouraging play of his defense in Carlson’s absence makes head coach Todd Reirden look forward to having his top gun back in the lineup even more:

“He’s obviously had a tremendous year, and any time you don’t have a player of that caliber in your lineup it’s difficult,” Reirden said in an off-day media session Aug. 11. “Especially with how our defense transitioned going into the start of the year and him really taking over the leadership back there and having some new players around.

It’s made his importance even more valuable to the team than in the past. Obviously his numbers this year speak for themselves, so for us to have him in the lineup for Game 1 would be huge and is something we’re hopeful that can happen. If not, we’ve got people that can fill in, and that’s what it’s all about – people that can take advantage of those opportunities.”

3 – The Caps Still Have Plenty of Room for Improvement

The Caps have been better defensively and put forth a solid showing in the round-robin despite a lack of offensive production from their top players, a power play that continues to struggle and without generating the extra energy and intensity that playoff hockey requires.

So far so good, but there is plenty of room to grow.

Gudas, who may not see the ice in Game 1, leads the team in points with a pair of assists, while 11 different players have recorded a single assist for a team that scored five goals in three contests. Conspicuous by their absence from the stat sheet is the NHL’s goal-scoring leader Alex Ovechkin and second-line forward Jacob Vrana, who had 25 goals and 52 points during the regular season. That means the remainder of the top six – Nicklas Backstrom, Kuznetsov, Oshie and Tom Wilson – have one point apiece.

That group showed signs of life in the win vs. Boston after Reirden mixed things up. Oshie potted a rebound goal immediately after being sent out with Ovechkin and Backstrom, and Wilson scored a slick game-winning goal early in the third period while playing with Kuznetsov and Vrana.

“We made some steps in the right direction, but there’s certainly still room for improvement, that’s for sure,” Reirden said in the postgame media session after beating the Bruins. “It was a better response, and I like that. The type of game was one that I was interested in playing. I’m glad that it played out like it did where we had to protect a lead and play at the end of the game with a lead and make some smart decisions with the puck.”

Washington’s power play has been a hallmark of the team’s success during the Ovechkin era, but this season, it dropped to the middle of the pack, and during the postseason, the Caps have struggled mightily with zone entries while converting on just 1 of 10 extra-man opportunities. The second power-play unit has shown signs of life in the last two outings, and there is just too much talent and offensive firepower among the top group for the struggles to continue. The addition of Carlson, at some point, also should provide a big boost for the first unit.

One area that Reirden wanted to shore up heading into the 2019-20 season was the penalty kill. After ranking 24th in the league at 78.9 percent in 2018-19, the Caps successfully killed 80.4 percent of their shorthanded situations this season and jumped to 12th. They have taken that one step farther in the postseason by killing all eight of their man-down situations in round-robin play, including six against the Flyers.

Jonas Siegenthaler has turned into one of the team’s most effective penalty killers, using his size, reach and strength to prevent passes to high-danger areas and clamp down on opposing forwards in front of the net. Carl Hagelin, Garnet Hathaway and Wilson continue to be effective at the top of the penalty-kill box, pressuring point men, cutting off passing lanes and blocking shots. Forward Travis Boyd has stepped in to replace Eller on the PK, and the unit hasn’t missed a beat.

“You feel comfortable with a player who knows our systems, knows the detail that’s expected and understands his role on the team,” Reirden said of Boyd during the off-day media session. “He’s played well in both of the games he’s been a part of.”

One of the key moments on the Capitals’ run to the 2018 Stanley Cup was against the Pittsburgh Penguins in Game 5 of the second round when Trotz decided to shake things up by moving Vrana from the third line to the top line to play with Kuznetsov and Ovechkin.

The Caps were struggling late in the second period, and on Vrana’s first shift with the big boys, he set up a Kuznetsov breakaway score. Then, in the third period, he buried the game-winning goal with 4:38 left in regulation.

Related: Cup-Winning Capitals: Where Are They Now?

Coaches who are willing and able to adapt on the fly and turn the matchups in their favor are the ones who can lead their team deep into the postseason. Reirden will need to be able to do that against his former boss, master-tactician Trotz.

Since taking over for Trotz, Reirden has had some of his in-game decisions – or lack of decisions – questioned by fans and the media. Sunday, with the Caps unable to muster any sort of offense to speak of for most of the first 20 minutes, Reirden juggled his top-six forwards with immediate results.

After an offensive zone faceoff win late in the opening period, Oshie thieved a rebound off the stick of the Bruins’ Zdeno Chara and slid the puck past goaltender Tuuka Rask on his first shift with Ovechkin and Backstrom. In the third period, Wilson, who was moved onto a line with Kuznetsov and Vrana, chased down a loose puck and roofed what turned out to be the game-winner.

All six of those guys performed better than they had in prior games. That’s the great thing about those six players; we can move them all around and give quite a few different looks to the opposition. That makes us a very tough matchup.

For anyone worried about Reirden’s ability to match wits with Trotz, his willingness to make adjustments like that, as well as the improved play of the defense, Holtby’s strong showing and the team’s improved penalty kill, should have Caps fans feeling pretty good heading into the first round of the playoffs.