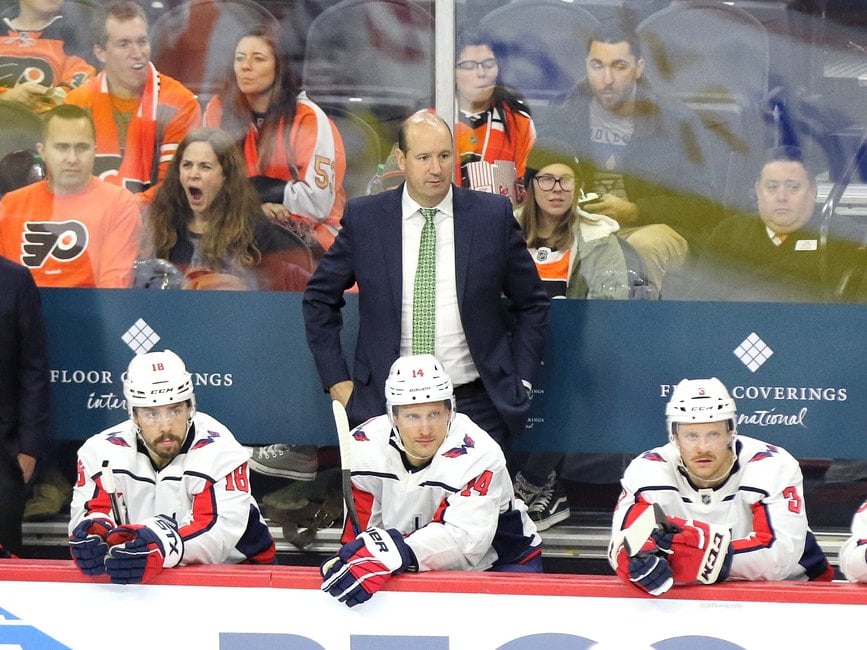 The Washington Capitals currently find themselves down 3-0 in their Stanley Cup playoff series against the New York Islanders. This is certainly not where this team expected to be and it cannot be where general manager Brian MacLellan expected them to be. It’s hard to look at the roster with the deadline additions MacLellan made and not think that this team was primed for a deep playoff run.

Instead, they’re staring down the ugly potential of a first-round sweep. The Capitals are not some young, inexperienced team. Many of the members of the 2018 Stanley Cup Championship team are still in place. The key noticeable difference between 2018 and 2020 is the man behind the bench for the Capitals. If this team cannot pull itself out of the hole they currently find themselves in, Todd Reirden is likely to take the blame and be on the hot seat given the team’s high expectations.

This Is Not the First Disappointment

The 2018-19 season was Reirden’s first season behind the bench for the Capitals. He inherited a team mostly unchanged after a Stanley Cup victory the previous year. The regular season went well enough, with the team clinching first in the Metropolitan Division. This gave them a first-round matchup against the wild card Carolina Hurricanes. The home team had won every game in the series as it headed to Game 7, in Washington. At 11:05 of the second overtime, Hurricanes forward, Brock McGinn ended the Capitals’ season.

It’s not considered uncommon for teams to struggle the season after winning the Cup. However, it would be much easier to forgive the team for faltering early in the playoffs if they hadn’t had such a strong regular season. They had the fourth-best record in the entire NHL and scored the fifth-most goals. Going into the playoffs, it seemed as if everything was on track for another deep run, but it just didn’t materialize. If things were going well in the 2020 playoffs, 2018-19 would be a minor blip on the radar. Because of the struggles in this playoff cycle, that blip becomes magnified many times over.

No Answer for the Islanders

Related: Capitals Throw Punches But Can’t Absorb Them In Loss To Islanders

Game 3 at first glance appears to be the closest game of the series, so far, with the Capitals only losing by one goal, in overtime. However, the Islanders dominated possession and shots on goal. Capitals goaltender, Braden Holtby, faced 34 shots to his opponent’s 23. The Islanders as a team averaged a Corsi percentage of 55.6% They also managed to keep the Capitals’ shots that did occur, mostly out of high danger areas at 5-on-5.

The Islanders have adopted a gameplan that disrupts the Capitals at every turn. When Capitals’ defenders gain possession and try to break the puck out of their zone, they are harried by opposing forecheckers who linger behind. The Islanders are engaging through the neutral zone and at both blue lines, keeping active sticks to break up passes and disrupt zone entries.

The Capitals have found it very difficult to cleanly carry the puck into the offensive zone and get themselves set up for zone possession time. Often they are having to resort to a “chip and chase” methodology that is resulting in “one and done” shot attempts on the net before the Islanders collect the puck and send it back the other way.

Through three games, Rierden, his staff and his players have not been able to find a way to counter this game plan. It could be argued that Game 3, in spite of the close score, was their worst effort at countering it.

On Aug. 12, the Pittsburgh Penguins fired assistant coach Jacques Martin. He has not been a head coach in the NHL since the Montreal Canadiens let him go in 2012. Martin was known during his time in Montreal for a defense-first system. The gift of hindsight says that with the personnel he had during his time there, that may have been the only way to win hockey games. In previous stops during his coaching career, Martin has had offensive juggernauts led by dynamic top lines. The early 2000s Senators that Martin coached were in the top five in goal scoring the majority of his time with the team.

In spite of his strong resume, Martin is likely one of the less obvious candidates waiting in the wings to jump into a possible NHL coaching vacancy. The list of currently unemployed coaches is impressive. It includes two former Stanley Cup Champions in Peter Laviolette and Mike Babcock, as well as proven playoff performers like Gerard Gallant and Guy Boucher. Jim Montgomery is also a name that could come up assuming he’s ready to be an NHL coach again. There is no shortage of people to interview if you are an NHL team seeking a new coach.

Related: Capitals Could Get More From Kuznetsov as a Winger

These factors all combined have to have an effect on Reirden’s future job security. Unless he and the Capitals can find a way to rewrite the current script, it’s likely that somebody is going to have to pay the piper for back-to-back first-round playoff exits. There is no shortage of qualified NHL coaches waiting in the wings to take someone’s job. That’s the cutthroat nature of the business side of this sport. So far, Reirden’s inability to adapt a gameplan to solve the puzzle the Islanders have presented him does not bode well for things yet to come.