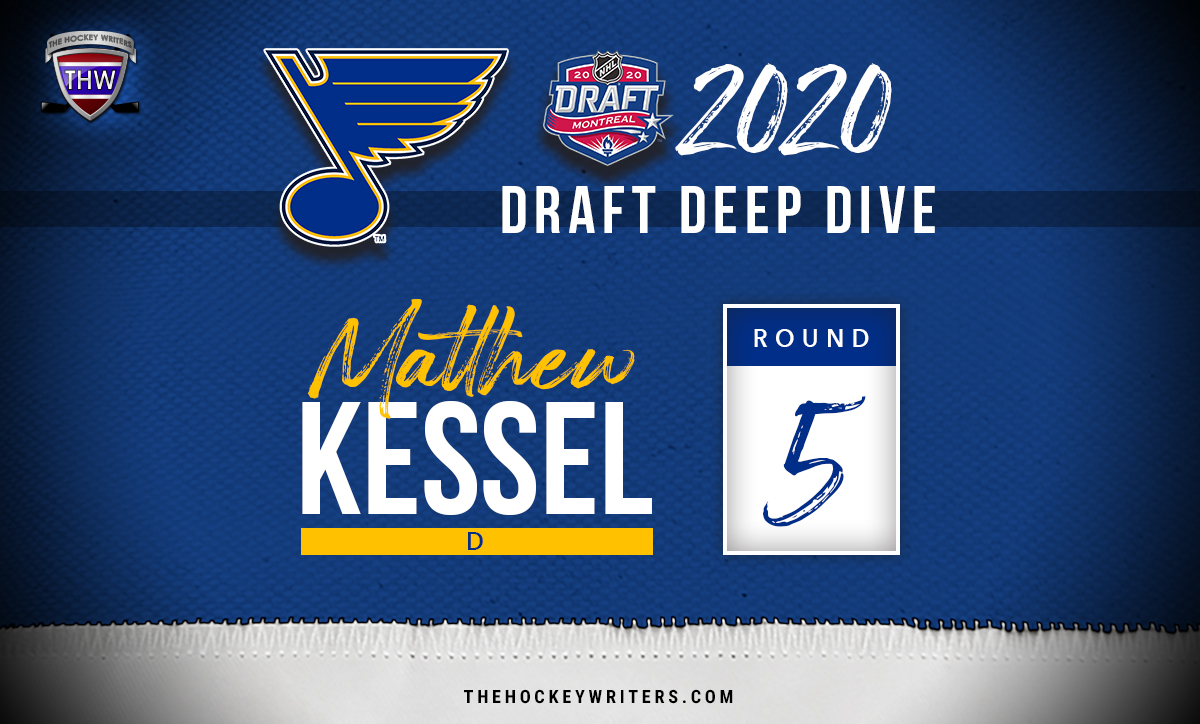 When the St. Louis Blues entered the 2020 NHL Draft, right-handed defenseman was one of their obvious team needs, even before team captain Alex Pietrangelo had officially departed for the Vegas Golden Knights. But most expected them to do it sooner than the fifth round.

The Blues went off the board with this pick, choosing someone not ranked by either Central Scouting or our experts here at The Hockey Writers. The 6-foot-3 college defenseman isn’t a total unknown, though. He was a leading freshman at UMass (Amherst) in his draft season.

Overview: What He Does Well

Kessel led all Amherst defensemen with seven goals last season. Before that, he played three seasons in the USHL, a league into which he was drafted 11th overall by the Fargo Force in 2017. He joined a bevy of big, heavy players the Blues drafted in 2020. His coach at Amherst, Greg Carvel, had high praise for the young blueliner:

[Kessel] goes out and he’s the same every shift. He competes, he’s smart, he’s got good puck sense, good puck skills, he’s a really complete defenseman. He helps you on both ends of the ice and he’s got tremendous attitude.

Kessel certainly has the size of an NHL defenseman. In fact, his dimensions are remarkably similar to Pietrangelo himself. And he uses that skill well, according to Corey Pronman, Senior NHL Prospects Writer for The Athletic, “Kessel is a big defenseman who competes hard, has some puck-moving skill and has a big point shot” (from ‘Grading the Blues’ 2020 NHL Draft: What we know about St. Louis’ class,’ The Athletic NHL, Oct. 7, 2020). Those skills all came together in 2018-19, when he helped the Sioux Falls Stampede capture the USHL’s Clark Cup before moving onto college.

Overview: What He Needs to Work On

Despite leading Amherst in goals, Kessel is not much of an offensive threat at this point in his career. He has 30 total points in 96 games over the last two seasons between the USHL and the NCAA.

Additionally, Kessel needs to improve his skating. Quoting Pronman again: “His mobility needs work and the offense in his game isn’t overly significant.”

Despite being one of 65 NCAA players drafted in the 2020 Draft, there doesn’t seem to be a lot of analysis of Kessel out there. Here is Pronman’s analysis in full:

Corey Pronman, The Athletic: “Kessel is a big defenseman who competes hard, has some puck-moving skill and has a big point shot. His mobility needs work and the offense in his game isn’t overly significant.”

Kessel has the size and frame of an NHL defenseman, and that is obviously something that no coach can teach. Beyond that, though, there isn’t much about him that projects as a strong NHL contributor. He is immobile in an increasingly mobile league, and despite having a big shot, he doesn’t use it to generate offense very effectively.

The Blues’ 2020 Draft was full of players who are gritty, physical, and big. That certainly fits their style overall, but it seems to be away from the direction the league is moving as a whole. Kessel could pan out as a third-pairing or seventh defenseman, but he’ll certainly need to improve his skating if he hopes to become anything more than that.