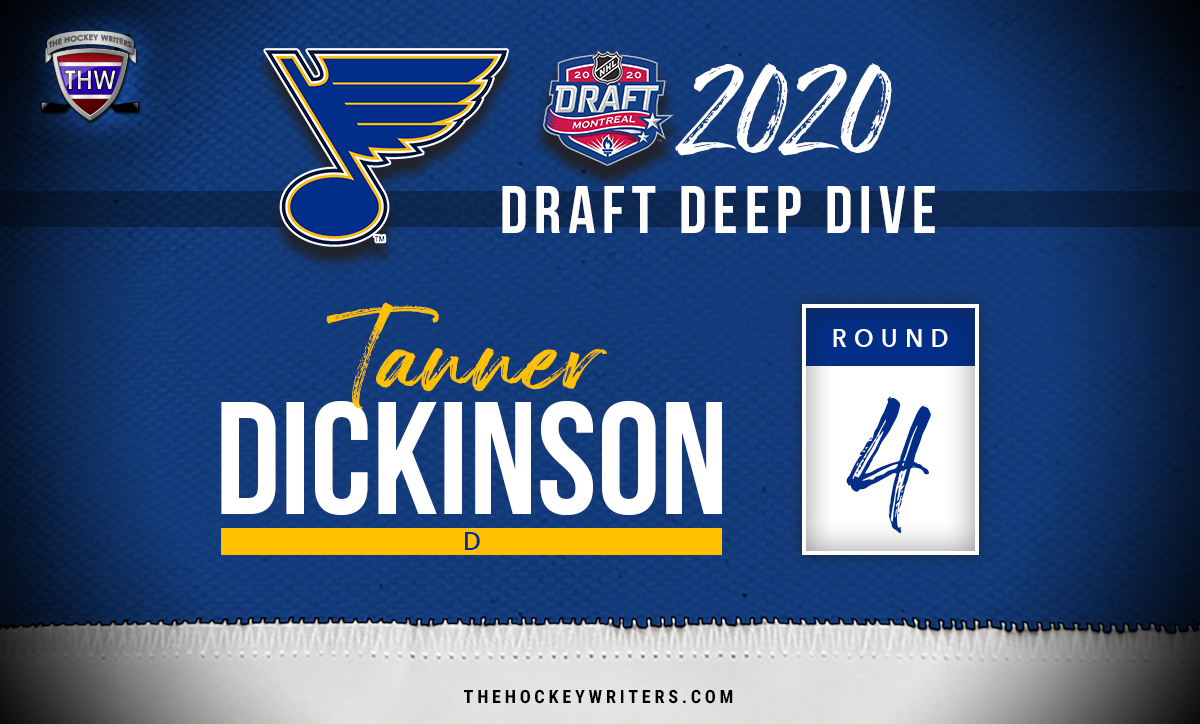 In the fourth round, the St. Louis Blues selected their first OHL player of this draft, Tanner Dickinson of the Sault Ste. Marie Greyhounds. Dickinson becomes the second American-born pick of the draft to this point for the Blues.

Dickinson is a native of Perrysburg, Ohio, and is joining the likes of J.T. Miller, Jack Roslovic, Connor Murphy, Sean Kuraly, and others as being players from the state of Ohio to be drafted to the NHL.

Overview: What He Does Well

Dickinson has tremendous speed. Speed can help create a lot of chances for his team and was a reason why the Blues drafted him to begin with. Speed kills, and if he can develop other parts of his game, he could become something.

Skating is not an issue for him like it is for a lot of draft prospects. He has an explosive ability on his skates and is strong on them as well, especially for a player of his size.

His skating is already near NHL-level, and that is really the only part of his game that doesn’t need work. Another positive thing for Dickinson is that he added size and strength prior to the draft this year, so he is bigger than he was when playing earlier this year.

Overview: What He Needs to Work On

With his ability to create chances in front of the net and on the rush with his speed, Dickinson needs to get better at passing and shooting.

He can control the middle of the ice if he becomes a better offensive player. When you are a good skater and explosive one, teams would worry more about you if your shot is improved. Dickinson only had 9 goals in 64 games with the Soo Greyhounds in 2019-20.

He did have 31 assists in 2019-20, but he needs to get a better shot to produce more points. He scored plenty of goals in the other junior leagues he was in before going to the OHL, but he needs to bring it to that level now.

More goals, more assists are two keys to his improvement. But you can also look at his defensive play. Because he is a small player, you cannot expect much defensively.

It wouldn’t hurt to become a more complete player for him, though. Anything he can do to have a chance to reach the NHL is something he should work on.

EliteProspects: “Dickinson’s speed is his key asset, and he can be useful with and without the puck. Didn’t play a ton, but when he did, he used speed with extreme effectiveness. Explosive skating led to a few rushes and net drives, which caused problems for the Oshawa D. He only got offensive zone starts and played briefly on the 2nd unit PP.”

OHLWriters: “Dickinson has superb speed. His edgework is very good and he can change pace as quickly as anyone. But if your hands and head aren’t as quick as your feet, then all that speed is useless. However, that’s not the case here. He is such a speedy player; he gets in on defenses quickly but his forechecking needs some work. Maybe once he adds that bulk to his frame, he will become more assertive physically on the forecheck. He also drives possession. He has no issues with carrying the puck over the blue line at to speed and assessing the situation and usually making the right play.”

I don’t expect much from Dickinson. At the very best, he’s likely to be a top-liner in the AHL and could possibly compete for a spot in the NHL at some point.

His speed is what makes you not count him out. If he can develop his game further and become more than just a skater, watch out for him in the AHL. He has plenty of time to improve his game, being a fourth-round pick.

But I still like the chance the Blues took in the fourth round to get him. They know that his skating opens up an opportunity for him to become a top-line AHLer and a potential NHLer down the road.

The Blues took some risks in the first four rounds, but you have to give them credit for going out and getting Blues style players.

Flyers Must Budget for Carter Hart Contract
Sabres Are Playoff Contenders After Signing Hall
“Everything’s on the table” as AHL plans for 20-21
Rangers’ 2020-21 Season: How Do They Stack Up in the Metro Division?
Projecting Radko Gudas’ Impact on the Panthers