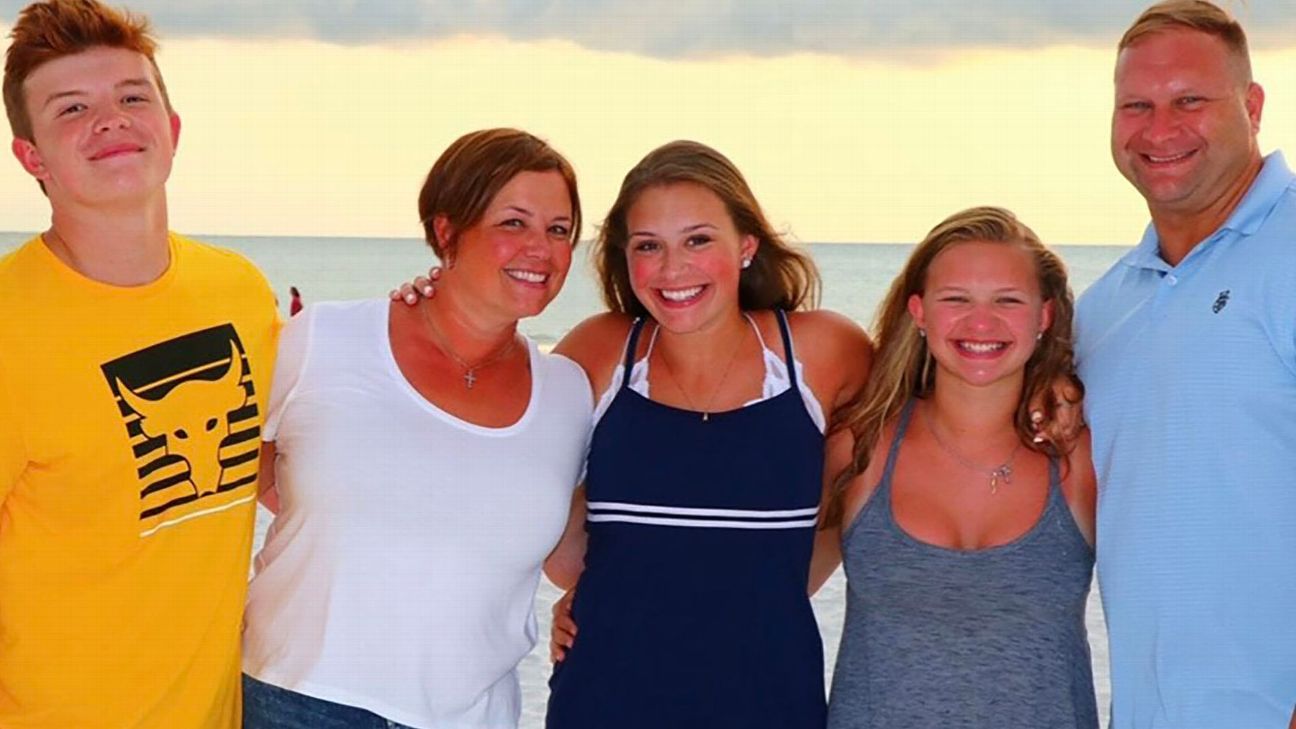 When 15-year-old Morgan Urso was refunded $1,209.87 from her hockey club, Team Illinois, last year, her parents told her the money was hers, and she could do whatever she wanted with it.

“I didn’t really care where the money was going,” Urso said. “I just wanted to make sure it went toward something good.”

She had been through the ringer that season. Urso’s coach told her she needed to take a leave of absence from the team. Adults discussed how to manage her life. She lost friends; some teammates just didn’t know what to say to her. She stopped going to school and started losing her love of hockey.

Urso felt ostracized — and it all started because she was honest about how she was feeling. “I want people to be more educated,” Urso said. “Because no kid should have to go through what I went through.”

Living in the Chicago area, the Ursos watch a lot of Blackhawks games. During last season, then-Blackhawks goalie Robin Lehner wore a mask that read #SameHere on the side — which he hoped would help erase the stigma of mental illness.

#SameHere is an expression which means: I’ve faced challenges in life too. Those challenges have affected my mental health. It’s a sign that we hope will unite the world to once and for all, normalize how universal this topic is. pic.twitter.com/gWsuDIwkMR

The Ursos looked up the nonprofit Lehner was supporting, #Same Here Global Mental Health Movement, and it was perfect for them. They wired $1,209.87, exactly. The specificity of the amount piqued the interest of Same Here founder, Eric Kussin, who reached out to the Ursos. Once he heard about Urso’s story, he shared with Lehner.

“When I wore the mask, it’s about awareness, it’s about showing something that a lot of people are struggling with that they’re all hiding, and trying to normalize it so more people come out of hiding and get help,” Lehner said. “But her story in itself is a big reason for the problem that is out there. The uneducation of society in general causes us not to progress. … It’s all about corporations, it’s all about liability. That’s why people don’t come forward, and why it’s such a hard topic to unfold.”

Urso’s experience underscores the importance of high-profile athletes like Lehner, Kevin Love and Dak Prescott coming forward with their mental health journeys, as it can embolden the next generation to speak openly.

But her story also illustrates that there are still ways to destigmatize mental illness, especially at grassroots levels, where there’s largely a lack of attention and accountability .

Urso grew up in LaGrange, Illinois, and began playing hockey in fifth grade. It was her goal to make Team Illinois, one of the premiere Tier I AAA programs in the area, and she worked two years to get there. She made the U16 team in May, 2019.

The following August, Urso began at a new high school, and it was a tough transition. “I always said to myself, I just need to get to high school and everything is going to be better,” Urso says now. “But once I got to high school, it wasn’t all that I made it out to be in my head. And realizing that, I sunk into a low place.”

She didn’t want to get out of bed in the morning. She couldn’t find motivation for schoolwork. “I just didn’t feel like me,” she said. “I was going to hockey, but I was forcing myself to go to hockey.” Often, she would find herself on the ice at practice counting down the minutes until it would end. Just 58 more minutes. Just 57 more minutes.

Urso’s parents made her an appointment with a psychiatrist. She was diagnosed with anxiety and depression, and was prescribed Sertraline, an antidepressant, as well as Trazodone, a sleeping aid. But one night after a game, Urso got out of the shower and stood in her hallway, crying. “Are you OK?” her mother, Kelly, asked. “What’s going on?”

Morgan collapsed into her mother’s arms. “I think I need more help,” she said. “I just need help.”

By early November, Urso left school and began an outpatient program. Being on the ice and around her hockey teammates, gave her a sense of normalcy. Her doctors also encouraged it. Physical activity was helpful, and so were the social interactions of a team environment.

After her first day of the outpatient program, Urso attended a weekend tournament with Team Illinois in Detroit. But the following Monday, Urso said she didn’t feel like going to practice. Kelly Urso decided it was a good idea to schedule a meeting with the team’s coach, Larry Pedrie.

Morgan Urso, Kelly Urso, and Pedrie met that Wednesday in the locker room for a private conversation. Morgan shared that coming to hockey sometimes felt like a struggle, but she felt better when she was there. She was honest about everything — her medications, the outpatient program, the fact that she had experienced suicidal thoughts.

According to Kelly Urso, Pedrie told Morgan he didn’t have any experience with mental illness and wasn’t sure what to do. However if hockey was helpful, he said, then she should come participate to whatever degree she was able. “He said whatever you need, call me,” Morgan Urso recalled. “If you don’t want to skate in a game, you can be my assistant coach on the bench.”

But the next day, the Ursos got a call from Pedrie that completely reversed course. Urso was no longer allowed at practices or games, and she was told she couldn’t communicate with any of her teammates. Pedrie had gone to the Amateur Hockey Association of Illinois (AHAI), the state’s governing hockey body, for guidance. This was their directive. As the Ursos were told, a few years ago, a pair of U19 teammates carried out a suicide pact, and the organization felt it was best if Morgan wasn’t around teammates, to prevent something similar from happening.

Pedrie and representatives from AHAI did not respond to multiple requests for comment.

The family was in shock. This was an issue about Morgan’s own mental health; she never said anything about influencing anyone. A tragedy had happened years ago, but AHAI’s only response to preventing something similar was isolating a 14-year-old girl from her teammates? What type of education did they seek out? What type of programming could they have implemented? AHAI is a governing body that’s supposed to help grow the sport. It’s also nonprofit, meaning their financials are public. This isn’t a mom and pop operation. According to their 2020 financial report, the organization earned $4 million in revenue.

Kelly Urso spent the entire weekend trying to get in touch with somebody — anybody — who could give some answers. She contacted officials at AHAI and USA Hockey and got no response. Meanwhile, Pedrie sent out an email to all other team parents explaining Morgan would be welcomed back when she got “back on her feet, being the positive happy, smiling kid we all know she is.” The coach also wrote: “We do know the last thing we want is to see our kids upset and carrying the burden of a teammate’s personal struggle.”

When a teammate showed Morgan a copy of the email, she was infuriated. “Does he even understand how mental health works?” she wondered.

The “burden” comment stuck with her. “No one with mental health issues should be called a burden,” she said. “And that is the stigma I am trying to end.”

Kelly Urso finally got a call from Mike Mullally, an officer at AHAI who told her it was his decision for Morgan to leave the team. According to Kelly Urso, Mullally repeatedly said, “I’m just a hockey guy,” and also didn’t have all of the facts about Morgan’s situation correct. (Mullally also did not respond to request for comment). AHAI told Morgan that she could return when she was “100%.”

“What does ‘100%’ mean?” Kelly Urso asked. “What are the benchmarks Morgan needs to hit to be reinstated with the team?”

The family didn’t get any firm answers.

Urso missed a month of the season, and AHAI refunded her the $1,209.87 for her time missed. The Ursos also obtained legal representation, and filed a charge of discrimination with the Illinois Department of Human Rights — against both AHAI and Team Illinois — for excluding Morgan because of her disability. The charges are currently pending investigation.

While Urso ultimately did rejoin Team Illinois for the end of last season, the environment had changed. A parent on the team became certified by SafeSport, and followed Urso everywhere she went at the rink, including the locker rooms. Kelly and Nick were instructed they had to be present for every practice or game. Outside stressors weighed on Urso too, and her doctors suggested she take a break from hockey for her own well-being.

This season, Urso did not rejoin Team Illinois; she plays for her new high school team, as well as a new club team. The club is in a lower tier from Team Illinois, but Urso felt it was important to spend this season rediscovering her love for hockey, and regaining her confidence. Before the season, she told her new coach about everything that happened last season.

“She was open-minded about everything,” Kelly Urso said. “It was like, ‘whatever you need, just let us know.’ They told Morgan it was great she was so open.”

Urso often posts about her mental health on her Instagram, and her teammates are typically quick to comment with messages of support.

Same Here founder Kussin stayed in touch with the Ursos, and decided to connect Morgan with Rob Schremp, a former NHL player who has become an advocate for Same Here.

Toward the end of Schremp’s playing career, while he was in Europe, he was diagnosed with anxiety and depression. He made his diagnosis public with his team. “It was said to me, ‘We won’t sign Rob back because of his quote, issue,'” Schremp said. “That was really frustrating. Then I went to get another job, and the day I was going to sign they said, ‘We heard you were taking medication and are F’d in the head.’ I couldn’t believe what was being told to me.”

When Schremp learned of Urso’s experience, he set up a FaceTime session with her in June.

“When I heard Morgan’s story, I felt for her in such a terrible way,” Schremp said. “I had to deal with those feelings of rejections and emotions at 31. She was dealing with it at such a young age. I didn’t want one person or one team to affect her like that, to crush her love for the game, just giving her the wrong message completely. I wanted her to understand there’s good people in hockey.”

They have texted or called each other at least once per week since, developing a mentorship, but also just a friendship, built on a shared understanding.

“We’ve built a relationship where we know what we’re going through, and we know what crappy days look like, but we’re still here,” Urso said. “I was like, ‘I know this sounds weird, but I’m really glad this happened to you too, because I know I’m not the only one out there.'”

Throughout the season, Urso has rediscovered why she loves hockey, though it’s not always easy.

“Sometimes I still struggle with motivation at the rink and wanting to be there, but it’s a more positive place now,” she said. “Being at a new program, I feel safer, like I can talk about it. I don’t have to wear long sleeves all the time, I can show people my scars. I’m not afraid of people staring at me or judging me anymore.”