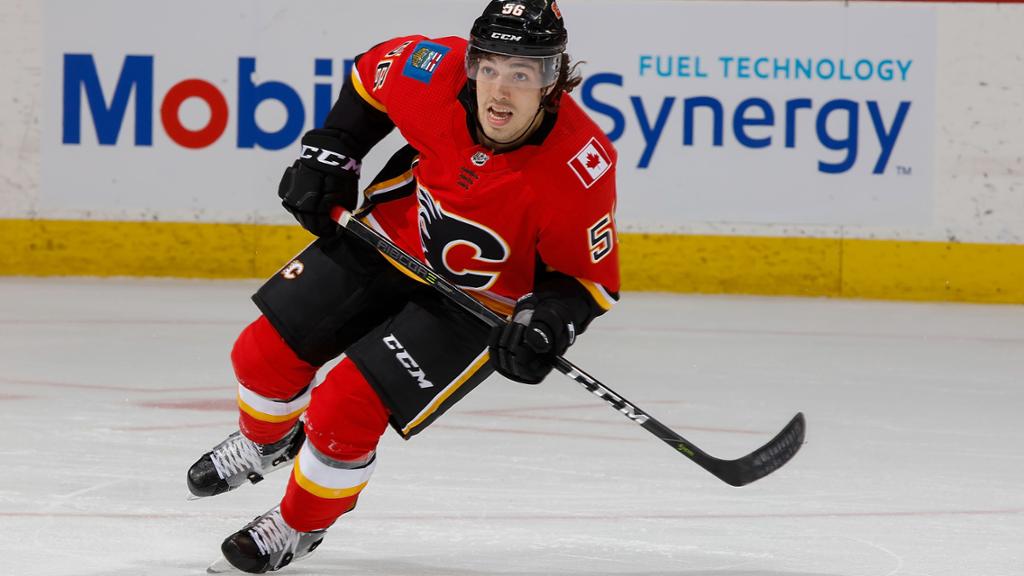 “Fans are going to love this guy,” the Florida Panthers general manager professed after inking the plucky forward to a two-year contract on Oct. 9. “He’s an energy forward who can fly. He’s an F1, in-your-face, hard forward with hockey sense who can play the game and will provide presence in the offensive zone. He’s a very, very fast, speedy wing who plays with an edge.”

Looking back, it’s that infamous edge that has helped Lomberg traverse a long road to the NHL.

After going undrafted out of the University of Maine, the Richmond Hill, Ontario native initially started to make a name for himself during the 2015-16 season with Adirondack in the ECHL.

In 43 games that year, he notched 35 points (18 goals, 17 assists) to help the Thunder reach the postseason. In the 2016 Kelly Cup Playoffs, he posted six points (three goals, three assists) in 12 contests.

Quickly earning a promotion from the ECHL, he went on to spend the next two seasons with Calgary’s AHL affiliate in Stockton. Praised for his high-energy and physical play, he posted 26 goals, 31 assists and 237 penalty minutes over 125 games with the Heat from 2017-2019.

Rewarded for his play once again, Lomberg also made his long-awaited NHL debut during the 2017-18 campaign, tallying one assist and 15 penalty minutes in seven games with the Flames.

“Helping with the mental side of it would probably be the biggest thing for me,” said Lomberg, who has appeared in 11 career NHL games. “Initially there’s excitement and the nerves about being out there, but as time goes on you realize you fit in and can keep up with them and excel.”

Despite having to climb from the ECHL to the NHL, Lomberg found a lot of value in his journey.

“It’s taught me a ton as a player and as a person,” Lomberg said of his career to date. “As hard and long as the journey has been so far, I wouldn’t really have done it any other way. I met some tremendous people and leaders along the way that I took as much as I could from them.”

At 25, Lomberg believes there’s “no doubt” that he’s only just beginning to enter the prime of his career. In fact, this past season, he was almost a point-per-game player in the AHL, registering 20 points (11 goals, nine assists) in 20 games before an injury cut his 2019-20 campaign short.

“As the years go on here, I keep adapting and finding ways to make myself the most effective pro I can be,” said Lomberg, who measures up at 5-foot-10 and 195 pounds. “I definitely haven’t reached my ceiling yet. I’m excited to take the next step this season with the Panthers, for sure.”

A notable milestone, this season will also mark the first time Lomberg plays on a one-way deal.

“It means everything,” Lomberg said. “It definitely wasn’t easy to get to this point and I have a ton of work ahead of me. For the front office to put their trust in me with a two-year contract, I can’t thank them enough. I truly can’t put into words how excited I am to get started here.”

As for his role with the Panthers, Lomberg will most likely be given a good opportunity to earn a regular spot among the team’s bottom-six forwards. Describing his own play style as one full of “speed and intensity” he aims to not only shut down the opposition, but also lift up his teammates.

Of course, playing under a legendary coach like Joel Quenneville should also help his game.

Until then, Lomberg is spending his offseason working out and skating up in Ontario.

But having not played competitively since late January, he’s itching for the real thing.

“I’ve been ready, to be honest with you,” Lomberg said. “I’ve been out for quite a while now. I was ruled out back at the end of January… I took my time with that to get ready and rehab. I had a lot of great people helping me out to get back to where I could train effectively and be at my best. I’ve been there quite a while now. If the season started tomorrow, I’d be ready.”

Lightning Re-Sign Sergachev To Three-Year Deal
As Alberta’s COVID-19 cases rise, so does tension over world junior championship
Damien Cox: Christmas without world junior hockey is the only safe play, as much as it would hurt
Flames Need to Honour Former Greats the Right Way
Islanders: Revisiting the Johnny Boychuk Trade