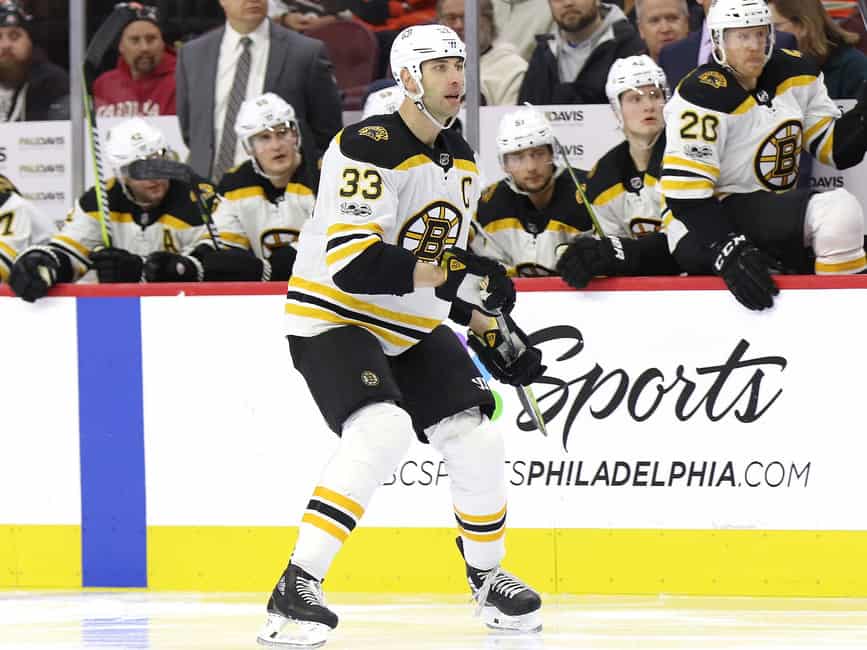 In today’s NHL rumor rundown, are the Boston Bruins trying to trade a young prospect defenseman in order to upgrade their blue line? Meanwhile, the Toronto Maple Leafs have one of their prospect d-men coming to North America in preparation for next season. The Ottawa Senators aren’t getting good news when it comes to one of their goaltenders and congratulations go out to Chicago Blackhawks forward Patrick Kane.

According to a report from Boston Bruins insider Joe Haggerty, the Bruins are in the process of trying to trade Urho Vaakanainen. The hope is that they can use the prospect to upgrade their blue line.

He writes that the team has not improved over the offseason and to get something, you need to give something. From Haggerty:

To simply re-sign restricted free agent winger Jake DeBrusk isn’t going to move the needle very much when it comes to fan expectations, and just adding Zdeno Chara to the mix on a one-year deal would give off the impression from the B’s front office that last season’s second round exit was good enough.

On what kind of trade the Bruins might be looking at, Haggerty adds that something in the neighbourhood of what they tried to do when they were after Oliver Ekman-Larsson is in the realm of what the Bruins are thinking.

The official Jokerit Helsinki Twitter handle notes that Maple Leafs prospect Mikko Lehtonen has terminated his contract with Jokerit of the KHL and will be heading to North America soon to join the Toronto Maple Leafs.

Lehtonen, 26, will be trying to crack the Maple Leafs roster for the firest time since signing a one-year contract with the team in May. He won the KHL’s Defenseman of the Year award last season, scoring 49 points in 60 games but he was playing even better this season, producing at a point-per-game rate.

As Zdeno Chara declines making a decision on a return to the NHL, there have been some whispers that perhaps the Toronto Maple Leafs might have interest in the veteran defenseman. GM Kyle Dubas commented on those rumors.

When asked if he would explore the idea of adding Chara if he became available, Dubas said, “Yeah, I mean that is your job, you explore everything. I just don’t know where the cap space would come from and I’m really curious if Chara is kind of Boston or bust at this point.” He added:

I don’t know if he’s willing to uproot his family and play for another team. Maybe he is, but you know, I would be surprised if Chara ends up in a Maple Leaf uniform, put it that way, but you make every call you need to make.”

… the expectation is he’ll start the season on long-term injury reserve. Dorion has stated that decision won’t be made until the organization can get him over to North America, but Nilsson is still suffering the effects of post-concussion syndrome back in Sweden.

The Senators added Matt Murray via trade from the Pittsburgh Penguins at the draft and will likely need to call upon Marcus Hogberg to will serve as the backup during the season.

The Los Angeles Kings have decided that 2020 second-overall draft selection, Quinton Byfield will not be joining the Kings roster until the World Junior Championship tournament officially comes to a close. There might not be a need to decide if the tournament and the season don’t overlap, but should they, the Kings have made the WJC a priority.

Scott Wheeler of The Athletic said Byfield that he “spoke with Rob Blake and the plan is for him to participate in the tournament regardless.” The idea is that this would be excellent for Byfield’s experience and development.

It seems like Chicago Blackhawks forward Patrick Kane surprised more than a few people when he announced on Thursday evening the birth of his son. Kane posted a tweet announcing the arrival of “PTKIII” (Patrick Kane the third) as he and longtime girlfriend Amanda Grahovec posted a photo from the hospital.

For the most part, their pregnancy was kept private so the news comes as a bit of shock to fans who don’t follow the two closely but congratulations go out to the couple.