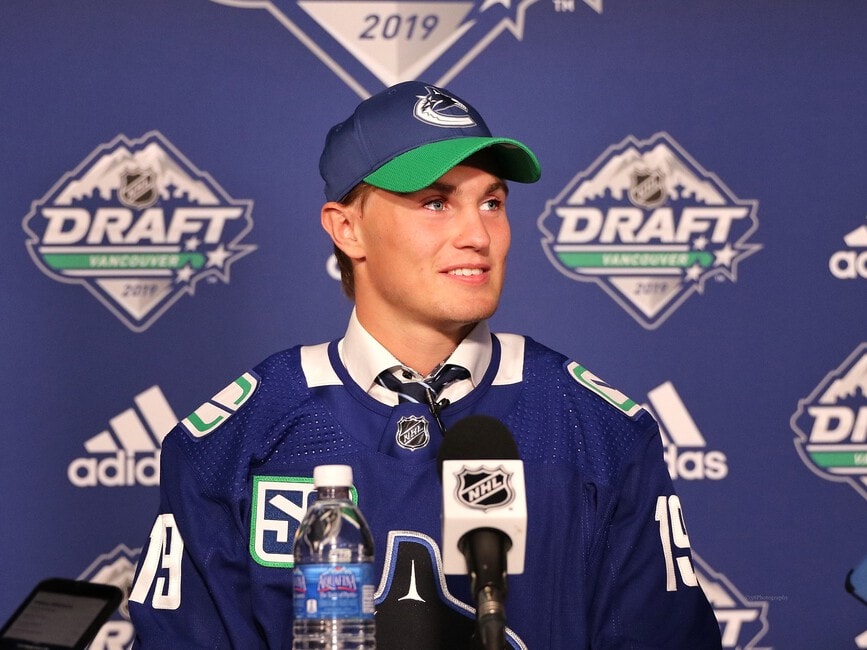 The 2020-21 NHL season started on Wednesday night and one of the Vancouver Canucks’ top prospects found the back of the net for his first goal. A Montreal Canadiens’ recent draft returned to the ice and picked up right where he left off. A pair of prospects had big nights in the NCAA ranks and the son of an NHL great his honored in juniors.

Nils Hoglander will not be considered a prospect much longer. If he continues to play as he did in his Canucks debut last night, it won’t be long before he is referred to as an NHL star. Vancouver selected the Swedish winger in the second round (40th overall) of the 2019 NHL Entry Draft and looks just as good as advertised.

After getting his first NHL point by assisting on Bo Horvat’s opening goal, Hoglander scored his first goal, late in the second period, off a rebound from a Tanner Pearson shot.

“I couldn’t believe it when the puck went it,” Hoglander said after the 5-3 win over the Edmonton Oilers. “I was in the moment and I was happy to see the puck going in. It feels good. I think we played a good game and it feels really good.”

The 20-year-old made it to the NHL much sooner than expected and he looked he belonged from his very first shift. The Canucks have had Calder Trophy finalists in each of the last three seasons and might be keeping that streak alive this season. Hoglander is part of a very young core that includes Brock Boeser (23), Elias Pettersson (22) and Quinn Hughes (21). It is easy to see why fans in British Columbia are flat out giddy over the future of this team.

Defenseman Mattias Norlinder was playing very well through his first 20 games of the Swedish Hockey League (SHL) season. He left Frolunda HC’s game on Dec. 17 with a knee injury which kept him out of the lineup for over three weeks.

He was back on the ice today versus Skelleftea and wasted very little time in making an impact. Less than a minute after his team fell behind 1-0, he tied the game with his third goal of the season.

Norlinder did a tremendous job in weaving through traffic to find some space and get off a deadly wrist shot. This is the type of play that led to the Canadiens drafting him in the third round (64th overall) in the 2019 NHL Entry. He is the exact type of defender that today’s NHL teams are looking for; mobile with very good offensive instincts while being responsible in his own zone.

Sam Colangelo and Gunnarwolfe Fontaine have plenty of experience in leading an offense. They were teammates last season with the Chicago Steel in the United States Hockey League. Colangelo finished the 2019-20 season tied for third in scoring with 58 points (28 goals, 30 assists) while Fontaine was right behind with 57 points (26 goals, 31 assists).

The duo is now playing together in the college ranks for Northeastern University and they each found the scoresheet in last night’s 7-0 blowout of New Hampshire. Colangelo played two games before heading to the World Junior Championship where he helped the United States win gold. The Anaheim Ducks prospect picked up his first collegiate point on Grant Jozefek’s power-play goal in the second period.

Fontaine, a 2020 seventh-round (202nd overall) by the Nashville Predators, scored his third goal of the season early in the third period. He added an assist later in the final frame. He has three goals and eight points in his first 10 NCAA games.

The victory improved Northeastern’s record to 6-3-2 on the season. They entered the week ranked 13th in the country and have a huge game at No. 3 Boston College on Friday night.

Moving from two former members of the Steel to a current player producing in Chicago. The USHL announced their weekly player awards on Thursday and the Steel’s Josh Doan took home Forward of the Week honors.

The 18-year-old son of former NHL All-Star Shane Doan, had four goals and nine points in three games the past week. He played a big role in the Steel winning two out of their three games.

Doan has nine goals and 19 points through 18 games this season. He had just five goals and 14 points in 45 contests during the 2019-20 campaign. He is eligible for the 2021 NHL Entry Draft and is committed to playing for Arizona State University next season. At 6-foot-2 and with his hockey pedigree, you’d have to imagine an NHL team taking a flyer on him with a late-round pick this fall.

Kings Can’t Get an Iafallo-Like Return From Maple Leafs
B.C. government approves plan in principle to allow WHL to resume in the province
NHL ends February with 4 players on COVID list
Lundqvist back on ice, ‘months’ away from deciding future
Oilers’ Chiasson suspended 1 game for hit on Leafs’ Vesey