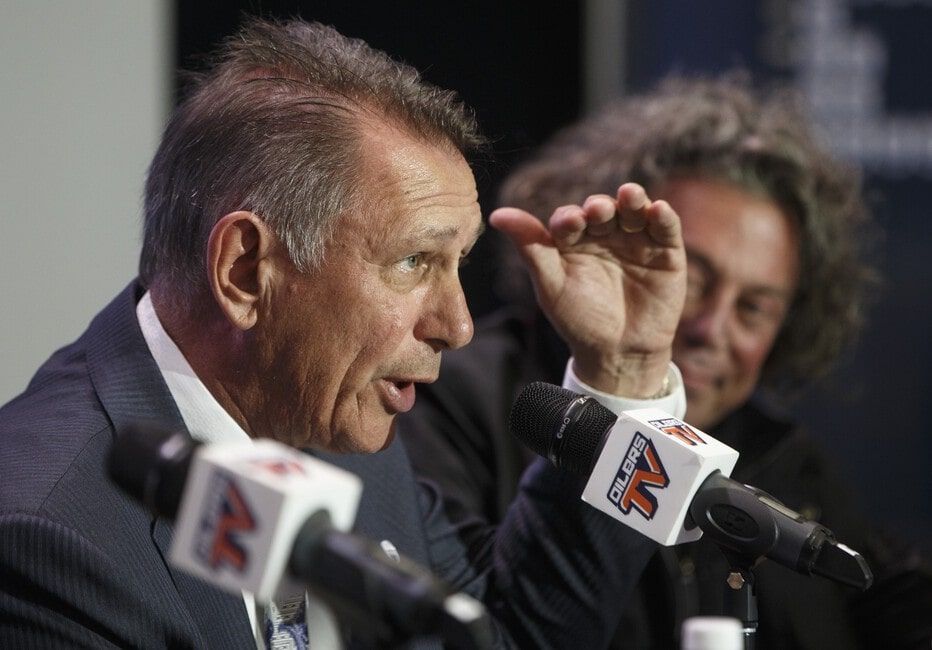 If you ever needed evidence the Edmonton Oilers fan base is passionate — and perhaps painfully so — look no further than the polarizing reaction from fans on Wednesday to news that depth forward Devin Shore was signed to a two-year extension by Oilers general manager Ken Holland.

An $850K per season deal that can be buried in the AHL if a more deserving player presents himself over the course of the 2021-22 season, Oilers fans were vocal, emotional and, often out of line with their comments on the signing.

Some called it a decent depth extension at a fair price while others pointed to Shore’s less-than ideal analytics and suggested Holland should be fired. Perhaps the big take away from the news wasn’t actually the signing itself but the reaction to it. This is going to be a long offseason for many clearly stressed and nervous Oilers fans. These fans, for a lack of a better phrase, are freaking out over something that shouldn’t make or break the Oilers season.

Shore’s advanced 5-on-5 stats are not good and it’s fair for fans who heavily rely on these numbers to pick this deal apart. A 38.4 CF% and a 34.6 GF% isn’t pretty and it essentially suggests there are times the player is being caved in when it comes to shot attempts and goal scoring. As Zach Laing of Oilers Nation pointed out, among 364 forwards who played over 362 minutes of 5-on-5 time this year, Shore’s shot attempt share was the worst in the league.

That said, the fact that Shore got a two-year contract — and a raise to go with it — has set a huge portion of the fan base into a tizzy. Some have said they can’t stand this team or its GM because the organization signed Shore ahead of a player like Ryan Nugent-Hopkins. Others have called for Holland’s head because, if the Oilers insisted on signing Shore at all, one year was more than enough.

Throughout the day on Wednesday, fans who are clearly invested dramatically overreacted to all of this.

For every fan who pointed at the fancy stats, there was another fan who defended the signing. This group sighted Shore’s ability to play the penalty kill, move between wing and center and noted he was a veteran who understands his role, forcing young players bubbling up to compete for jobs.

Many noted that Shore was well liked by his teammates, he comes to play every night and he’s a soldier who understands that he might not get into the lineup all the time. He’s ok with that, even though he’s working hard to play a regular shift. Most cited the Oilers aren’t heavily relying on his offense, but he could contribute in certain facets of the game that go beyond goal scoring.

More than that, fans rushed to defend him because the analytics crowd was getting so loud. There’s a real divide between hockey fans who only watch the games and those who qualifying a player exclusively by his stat line. Many oppose the analytics supporters who ignore everything but underlying numbers. As if often the case, the argument became almost as much about the differences between the two sides as it did about the player in question.

One of the big points of contention was that the Shore signing signaled Holland was making him a priority over other players. That one is a bit baffling and again, it’s demonstrates a pattern among some Oilers fans. These fans aren’t privy to the same information the organization is, but they’re responding like they have all the details.

Sure, the Oilers probably could have waited. Maybe they should have, and if you lose the player, you lose the player. Instead, it appears Holland decided he liked Shore well enough to sign the easy deal that was in front of him. Holland himself said he looked at the 5-on-5 stats, so we can only he assume he knows the numbers and feels they can get better. We should also assume that Holland is looking at a larger picture here.

Personally, I don’t love that the Oilers signed Shore for two seasons. That said, it’s not a big deal and it could wind up being a win. However, if there’s one thing that’s clear, it’s this: if Oilers fans are this upset about a depth forward who might not be a regular and signed for not much more than league minimum for a couple seasons, just wait until Holland makes big decisions.

This is a critical offseason for the Oilers and this one signing seems to have given a good chunk of fans the impression Holland isn’t up to the task of getting the right pieces in the top-half of the lineup. It feels incredibly unfair to judge what Holland might do throughout the rest of the offseason based on one deal for a non-regular NHL player.