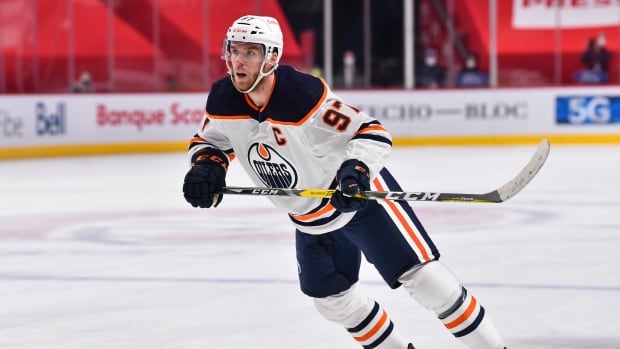 The award is given out annually by the NHL to “the player adjudged to be the most valuable to his team.”

McDavid, considered by many to be the front-runner for the award, dominated the 2020-21 scoring race with 105 points (33 goals, 72 assists) in 56 games — 21 more points than runner-up and Oilers teammate Leon Draisaitl, who won the award last year.

The 24-year-old from Newmarket, Ont., — who won the Hart Trophy in 2016-17 and finished third in voting in 2018-19 — is seeking to become the fifth player in NHL history to capture the award multiple times before his 25th birthday after Wayne Gretzky (6x), Bobby Orr (3x), Gordie Howe (2x) and Alexander Ovechkin (2x).

WATCH | Will Connor McDavid be able to lead a team to a Stanley Cup?

In the latest episode of The Breakdown, PJ Stock weighs in on what the world’s best player needs to do to win a championship. 8:07

A McDavid win also would make the Oilers the first team with different Hart Trophy winners in consecutive seasons since the Boston Bruins in 1968-1969 (Phil Esposito) and 1969-70 (Bobby Orr).

Matthews scored a league-leading 41 goals in 52 games to help Toronto earn the top seed in the North Division. He became the first Maple Leaf to lead the league in goals since Gaye Stewart in 1945-46.

MacKinnon placed fourth in the NHL with a career-high 1.35 points per game (20 goals, 45 assists in 48 games) to propel the Avalanche’s top-ranked offence to the franchise’s third Presidents’ Trophy.

He is looking to become the third Avalanche/Nordiques player to claim the Hart Trophy, following Joe Sakic (2000-2001) and Peter Forsberg (2002-03).

This year’s NHL award winners will be revealed during the Stanley Cup semifinals and final, with exact dates and times to be announced.