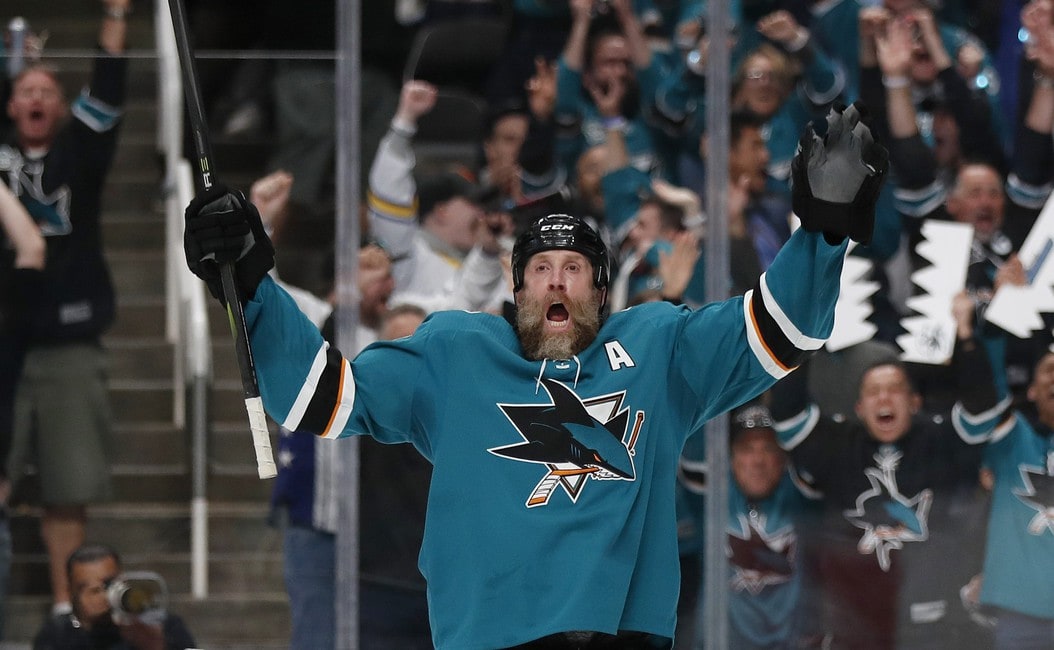 The Toronto Maple Leafs have been busy in October. Using key signings, the team found the right-shot defenseman it needed in former Calgary Flames’ blueliner T.J. Brodie. In addition, the Maple Leafs revived their roster by signing a number of inexpensive yet veteran free agents that have added both grit and experience to its lineup.

However, perhaps yesterday’s signing of Joe Thornton will prove to be the most important offseason acquisition that general manager Kyle Dubas pulls off. And we’ll see when the 2020-21 season begins.

In this post, I’ll share news about Thornton’s signing and then offer some random thoughts about what his signing might mean to the team or the NHL.

For anyone who might have missed the announcement yesterday, the Maple Leafs reported that Joe Thornton had signed a one-year contract with the team. The deal is worth the NHL league minimum of $700,000.

The signing means that Jumbo Joe is returning for his 23rd NHL season. He’s played for the San Jose Sharks for the past 15 years and prior to that with the Boston Bruins. Speculation is that Thornton will likely center the Maple Leafs’ third line next season.

Random Thought #1: Jumbo Joe Thornton Brings A Lot With Him To the Maple Leafs

For the 41-year-old center, last year wasn’t up to standards, as he scored only seven goals and 24 assists in 70 games. However, when fans look at Thornton’s résumé, it’s easy to see that he adds a wealth of experience to the team’s roster. He’s played an almost incredible 1636 regular-season NHL games, and during those games, he scored at almost a point-a-game clip, with 1509 points (including 420 goals and 1089 assists). Thornton also has skated in 179 playoff games and has scored 133 points during those games.

How can the Maple Leafs not be better because Thornton brings size, experience, skill, desire and motivation, a joy for the game, calmness under pressure, and positive leadership to the dressing room?

Yesterday the team did something that was circling in the rumor mill – but perhaps many fans seemed to dismiss as almost impossible when Thornton signed a one-year contract at NHL league minimum. Give the hockey insiders credit. They spotted smoke from the rumors that Thornton and the Maple Leafs had “mutual interest” and correctly shared that there might be fire.

However, not once in my reading did a single insider entertain an idea that the contract would be at the league minimum. I’m constantly surprised by how well hockey insiders actually have a pulse on what’s happening. Then, sometimes, they’re completely wrong.

This time, the insiders had the pulse of the situation. They were right that something was up between the Maple Leafs and Thornton. However, they were wrong about the size of the contract.

I’m not sure what to make of that – perhaps there’s a sense to which people believe hockey players default to being “professional” as defined by more interested in money than other aspects of the sport. But, I do understand in endeavors other than sport, the importance of chasing a dream – well-paid or not. I think hockey players do as well.

With all of Thornton’s accomplishments, what he doesn’t have (yet) is a Stanley Cup championship. With the Maple Leafs, he also joins “old-timer” Jason Spezza in that quest. Interestingly, both men signed for the same league minimum salary.

I wonder if the fact that Spezza was already with the team and had signed for $700,000 might have prompted Thornton to do the same. I know many would dismiss that thought, but Thornton – from what I read in my research – is a different kettle of fish. He isn’t motivated entirely by money. Plus, he’s already, according to CapFriendly, made about $110 million during his career.

On one hand, joining compatriot Spezza in such a band-of-brothers, bucket-list quest for the same money seems fitting for a long-time NHL player who’s motivated by a love of the competition the game of hockey offers.

Thornton’s action in signing for the league minimum makes me wonder about the current Maple Leafs’ roster. I know times are different and Thornton’s from a different generation of players, but let me ask a multiple-choice question:

In 15 years from now, which one of these current Toronto Maple Leafs’ forwards do you believe is more likely to do a “Thornton” and sign with a club for NHL league minimum for one final chance to win the Stanley Cup?

What do you make of your answer to this question?

Sometimes it hurts to be a fan. I get reminded of that almost daily from great Maple Leafs fans that are tired from losing. Similarly, for San Jose Sharks fans and the organization, losing Thornton was a sad day. Obviously, the organization’s response was pained when the news broke that he had signed with the Maple Leafs.

LeBrun phrased it perfectly, “I feel for Sharks fans who are as loyal as they come, they love Joe Thornton.”

Then he added that he was sure they would understand. I think he’s right. It reminds me that, although hockey players need to be professionals, the game is great because fans are not.

Related: Who is the NHL’s Top Goaltending Prospect?

Random Thought #6: How Does the New Maple Leafs Roster Impact Sheldon Keefe as a Young Coach?

One person I keep thinking about with all these moves is Maple Leafs head coach Sheldon Keefe. He’s a young coach without much NHL experience. On one hand, how exciting to coach this team with all its rich experience. On the other, he could have a tough job.

I can’t know this for certain, but from the comments from newcomers to the team (who bring loads of NHL experience) have made, I believe they’ll utilize their experience to help provide leadership that’s in line with the ethos and system Dubas and Keefe have built for this team.

If not, and Keefe plays in the sandbox like former head coach Mike Babcock did (thinking of the way he treated Spezza), it might be a difficult situation. Here’s hoping I’m right about Keefe and that he’ll be able to leverage the additional leadership options rather than fight against them.

Random Thought #7: Like Him or Not, Dubas Makes Things Happen

Anyone who reads my posts knows I’m a Dubas fan. I also know that many great Maple Leafs fans don’t share that opinion. They can’t wait for him to be gone.

I think he’s creative and intelligent and, insofar as he can be in a professional organization, considerate of his players. He might or might not have created something very special with this team: only time will tell.

That said, no one can blame him for a lack of trying. He has a plan, and he’s doing something about it. Furthermore, he’s making things work within that flat and unmoving salary cap.

Kudos to Dubas and his staff for providing so much excitement and, for me, hope for next season.