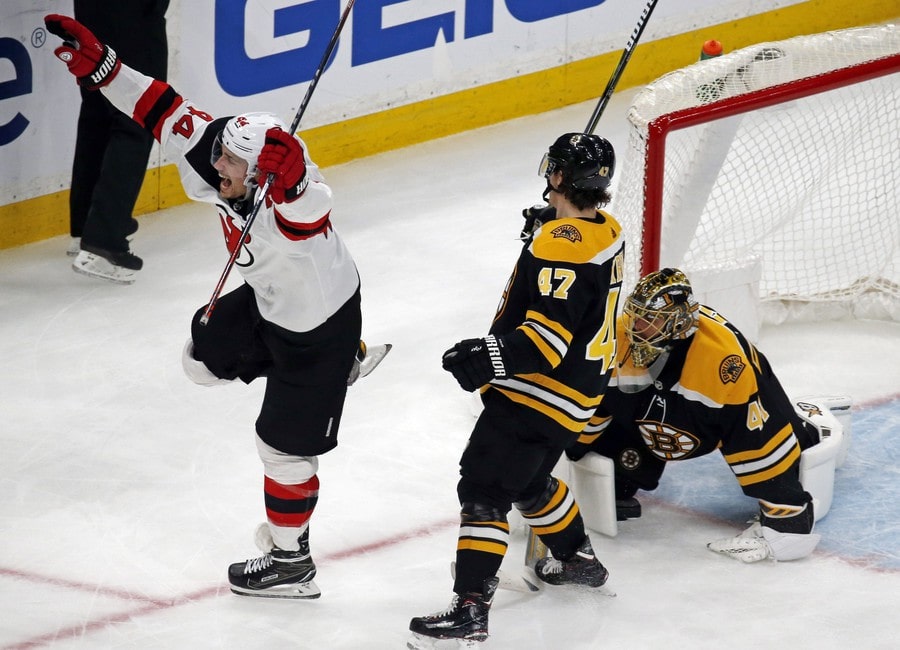 Despite struggling this season, the New Jersey Devils were able to find a couple of surprises amongst their roster. Out of 11 rookies, there were a few that were obviously able to make an impact early. There were also a few returning players that were able to surprise a couple of people; this example applies to players like Jack Hughes. However, it seems as though the Devils were able to find some success in their respective line combinations. To close out the season, they paired Hughes alongside Yegor Sharangovich and Janne Kuokkanen to form the Devils’ top line.

This particular line was nicknamed the “kid line” due to the lack of NHL experience that all three of them had. The second line can be called the “captain line” due to the team captain, Nico Hischier, being able to help Jesper Bratt and Pavel Zacha finish off the season on a high note. However, the one line that gets a lot of praise from head coach Lindy Ruff is the third line.

Interestingly, the Devils referred to this particular line as their “energy line.” This is intriguing because most of the time, a hockey teams’ third line is usually their “checking line,” which consists of the more defensive-minded forwards. Whereas a teams’ energy line is usually their fourth and final line in the rotation. Which consists of players that get the least amount of ice time, and their job is to give the main players a brief rest. Nonetheless, the Devils’ energy line provided the spark plug that was needed at times during the course of a game.

The line consisted of Michael McLeod at center, with rookie Nathan Bastian and alternate captain Miles Wood as his respective wingers. Before the start of the season, Ruff preached to the roster that the “Devils’ style of hockey” should consist of playing with aggression, speed, and being committed at both ends of the rink. He stated that the energy line executed his message perfectly.

The energy line was arguably the most consistent line throughout the course of the Devils’ season. Those three players always demonstrated some sense of urgency, and it showed in their pace. All of them skated hard and certainly weren’t afraid to play physical. This specific line combination was led by Wood, who was officially given one of the alternate captain roles after the departures of Kyle Palmieri and Travis Zajac.

So, it should be no surprise that he assisted in leading the energy line to success. Wood established the aggression and physicality early on before the season even began. Because during training camp, it was revealed that he got into a scuffle with teammate PK Subban during a scrimmage. So, Wood was already on a mission to try and play hard for the sake of hockey and his team.

Despite the season being shortened to 56 games, Wood was able to have a decent year. He was tied with Pavel Zacha for most goals on the team (17) and had the season been a normal 82 game season, he could’ve easily topped his career-high in that category (19). The reason for Wood tallying up all those goals was because he was shooting the puck more. He ranked second on the team for most shots (127) and trailed Jack Hughes by 15 in that respective category. Despite his low assist numbers (8), he was still in the top five for most points on the team with 25.

As previously stated, had the NHL had a normal season, Wood would’ve most likely topped his career-high in both categories. His previous record for assist was 14 (2018-19), while his highest points total was 32 (2017-2018). Ruff seems to have decent expectations for Wood next season, which is why I anticipate for him to reclaim his alternate captain role.

Aside from Wood, McLeod and Bastian were also a big surprise during the course of the season. McLeod was the centerman for the energy line and won 51.5% of his respective faceoffs. The biggest achievement for McLeod was that he was able to net his first career NHL goal this season. He only played a combined 33 games during his first two years in the league, however, Ruff gave him the nod to play in 52 games this past season. As a result, he was able to tally career highs in all three respective scoring categories: goals (9), assists (6), and points (15).

Due to his decent production, he was sometimes integrated with the penalty kill unit and became a solid rotation piece as the season was winding down. As for Bastian, this season was officially classified as his rookie season. Since he participated in 41 games, as opposed to his seven games played during the 2018-19 season. He might be overlooked at times, but his impact was there.

Like McLeod, he was entrusted to participate with the penalty kill unit due to his physical style of play. Because he actually led the team in hits with 136. It’s worth mentioning that he was actually second amongst NHL rookies in that respective category. He only trailed Montreal Canadiens’ rookie defenseman, Alexander Romanov, by two. However, Romanov did play in 12 more games than Bastian.

Bastian finished his rookie season with 10 points (three goals, seven assists). It seems as though the entire organization has nothing but nice things to say about the energy line’s production this season. They had a significant role defensively, and they sometimes saw themselves facing the opposing team’s top line. While they might not provide the most production offensively, they certainly set a good example for this Devils team from an energy and defensive standpoint.

Trey Matthews is currently the play-by-play announcer for the hockey programs at Adrian College. Matthews is also one of the only black hockey play-by-play announcers in the entire country. He has been featured in USA Today, USCHO, & others for his work. In addition to that, he’s also the host of a podcast show called Locked On Devils. His past writing experience includes him writing for his high school’s paper, Cub News, at the University of Detroit Jesuit High School & Academy.