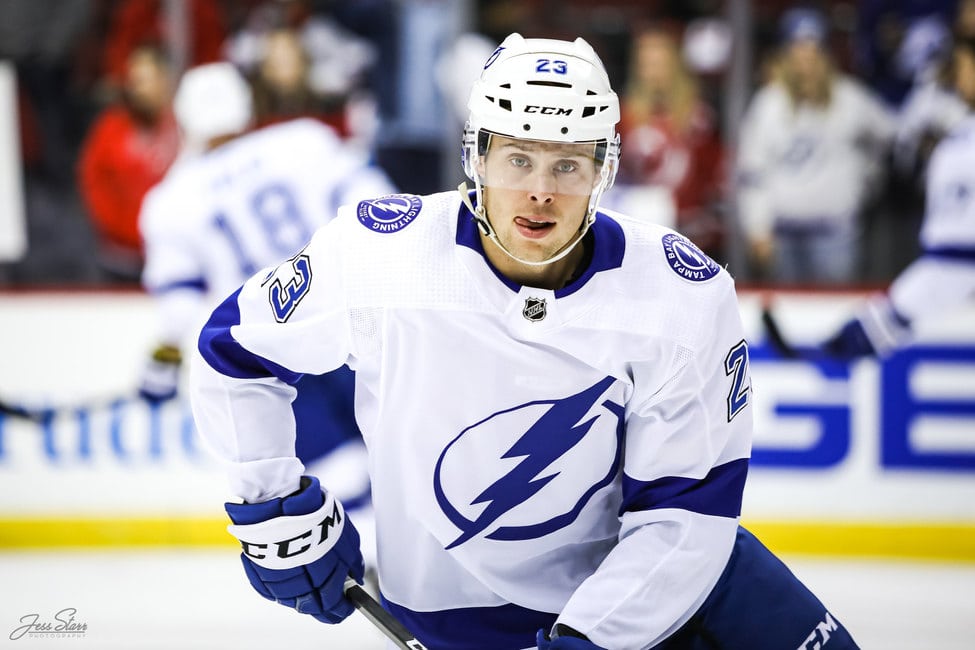 On Oct. 9, Carter Verhaeghe put pen to paper on a two-year deal with the Florida Panthers. The deal is worth an average of $1 million per year, totaling $900,000 for the 2020-21 season and $1.1 million for the 2021-22 season. He became available as an unrestricted free agent this offseason when the Tampa Bay Lightning failed to tender a qualifying offer. In what has been a long journey to hockey’s highest level, 25-year-old Verhaeghe will be playing in just his second season in the NHL.

Long Road to the NHL

In the 2011 OHL Priority Selection, the Niagara IceDogs drafted Verhaeghe 38th overall. He hit his stride during the 2012-13 season, his second with the IceDogs, scoring 44 points in 67 games. During the 2013 NHL Draft, he was drafted by his hometown Toronto Maple Leafs in the third round, 82nd overall. Verhaeghe found even more success with the IceDogs during the 2013-14 season, finishing with 28 goals and 54 assists. On April 2, 2014, he signed a three-year, entry-level contract with the Maple Leafs.

At 19 years old, Verhaeghe became captain of the IceDogs. Posting 33 goals and 49 assists during the 2014-15 season, he led by example during his second straight 82-point season. On Sept. 18, 2015, Verhaeghe was traded to the New York Islanders. He was one of five players dealt in exchange for Michael Grabner.

The summer prior to the 2017-18 season, Verhaeghe found himself being traded for the second time in his career. This time he was traded straight up for Kristers Gudlevskis. Playing for the Syracuse Crunch in the AHL, Verhaeghe flourished again. In his first season with the Crunch, he scored 48 points in 58 games. He established himself as a playmaker and top-six forward for the team.

During the 2018-19 season, Verhaeghe developed into an AHL star. In 76 games he tallied an eye-opening 82 points. His 34 goals landed him the Willie Marshall Award, given to the AHL’s leading goal scorer during the regular season. He shared this award this his teammate, Alex Barre-Boulet.

With 82 points, Verhaeghe was also awarded the John B. Sollenberger Trophy, given to the AHL’s leading scorer during the regular season. This was the Crunch’s first scoring title in franchise history. After a decorated season, the first team AHL All-Star was finally given the opportunity to play in the NHL.

Six years after being drafted by the Maple Leafs, Verhaeghe made his NHL debut with the Tampa Bay Lightning on Oct. 3, 2019. Ironically, the game was played against his new team, the Florida Panthers. He earned his first assist in the NHL just two days later against the Panthers at BB&T Center.

Verhaeghe, who played a total of 52 games, recorded four goals and nine assists during the 2019-20 season. His point total was efficient considering he only averaged 9:22 of ice time. Furthermore, he made his NHL playoff debut in the same season. He skated in eight playoff games in which he tallied two assists. As if his debut season couldn’t get any better, Verhaeghe and the Lightning went on to win the Stanley Cup.

The signing of Verhaeghe by the Panthers could prove to be one of their best this offseason. Although he spent much of his time as a bottom-six forward for the Lightning, he will have the chance to prove he’s worth a spot on the second or third line in South Florida. When asked about joining the Panthers, Verhaeghe said,

“I think I’m going to get a lot more opportunity than I would have in Tampa. Pretty much [they] liked my game and wanted to bring me in. It seemed like a really good fit.”

Verhaeghe was one of Panthers general manager Bill Zito’s first signings with the organization. Speaking about Verhaeghe, Zito said,

“He’s a guy now with a Stanley Cup pedigree who can play up and down the lineup with some upside… He’s a guy we’re really excited about to see exactly what he can do providing some opportunities here.”

Verhaeghe will have ample opportunities to prove his worth and make a name for himself during his time with the Panthers. He has the potential to develop into one of the league’s most dangerous playmakers. Pencil in Verhaeghe’s name as a player Florida will need to protect come the 2021 NHL Expansion Draft.