The winger beat Connor Hellebuyck on a nice move between the pads in the fourth round to secure his team’s second straight win.

Gaudreau, Andrew Mangiapane, and Christopher Tanev, from inside his own blue line, scored in regulation for Calgary (4-3-1). Jacob Markstrom, who made a couple of great saves in the shootout, turned aside 25 shots in 65 minutes of action, while Elias Lindholm had two assists.

Kyle Connor, with two on the power play, and Mark Scheifele scored for Winnipeg (5-3-1), which got 25 saves from Hellebuyck. Blake Wheeler added three assists.

After hitting the crossbar off the rush moments earlier, Mangiapane banged home a rebound with 6:15 left in regulation for his first of the season to give the Flames their first lead at 3-2.

But the Jets, who went up 2-0 in the first, tied things up with 1:50 remaining on the clock when Scheifele tipped Neal Pionk’s point shot beyond Markstrom’s glove for his fourth with Hellebuyck on the ice for an extra attacker.

The game marked the first of three straight meetings between the North Division rivals at Bell MTS Place this week, with the next two set for Tuesday and Thursday. The Jets will actually play four in a row against the Flames over a nine-day stretch, while Calgary hosts the Edmonton Oilers on Saturday before resuming hostilities with Winnipeg at Scotiabank Saddledome two nights later.

Down 2-1 entering the final 20 minutes, Gaudreau extended his point streak to eight games at 6:54 when he redirected a feed from Juuso Valimaki past Hellebucyk after the Jets turned the puck over.

The Winnipeg netminder made a great stick save on Lindholm midway through the third to keep thing level on a play that resulted in a Flames man advantage the Jets would kill off. Hellebuyck then stoned Mangiapane before Tanev hit the post as Calgary came in waves.

Coming off Saturday’s 4-1 home loss against the Vancouver Canucks, the Jets shuffled their top-6 forward group, with Scheifele centring Andrew Copp and Nikolaj Ehlers, while Paul Stastny skated between Connor and Wheeler. 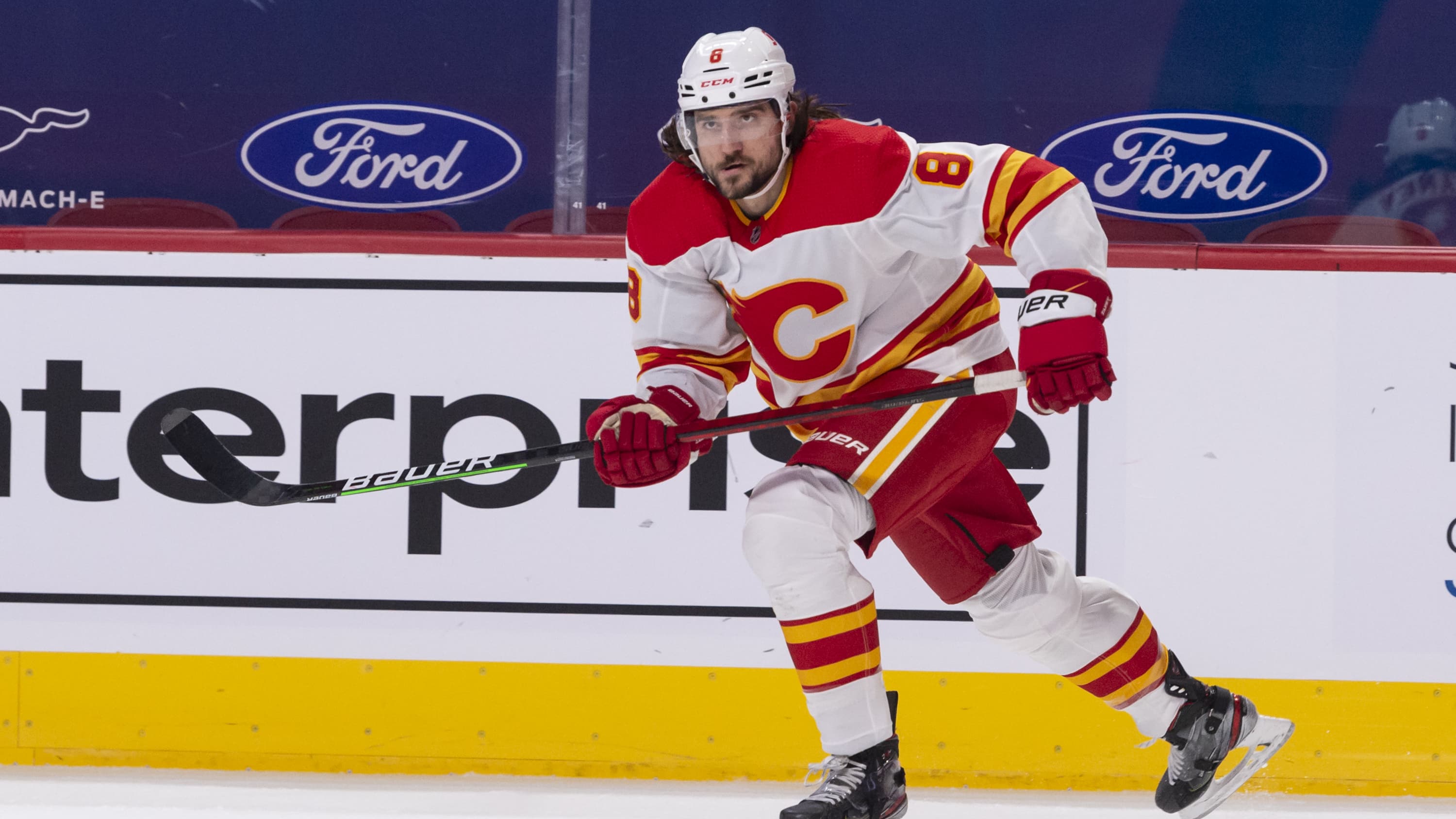 Calgary defenceman Christopher Tanev beats Winnipeg goalie Connor Hellebuyck with a shot from his own blue line during the 2nd period. 0:51

The Flames, meanwhile, secured a hard-fought 2-0 victory in Montreal over the Canadiens on Saturday that snapped a three-game slide thanks to Markstrom’s second shutout since signing a big-money deal with Calgary in free agency.

Winnipeg, which lost 3-1 to Calgary during the summer restart’s qualifying round, took the season opener for both clubs 4-3 in overtime on Jan. 14 courtesy of Patrik Laine’s winner — the sniper’s last action with the team before he was traded to the Columbus Blue Jackets along with Jack Roslovic for Pierre-Luc Dubois and a third-round pick nine days later.

The Jets opened the scoring at 4:31 of Monday’s first period on a man advantage when Connor, who entered without a point in his last three games, took a cross-ice pass from Scheifele and wired his fifth upstairs on Markstrom.

Winnipeg carried the bulk of the play throughout the opening 20 minutes, and doubled the lead on another man advantage at 13:46 when Connor one-timed his seventh from almost the exact same spot past Markstrom.

The visitors regrouped in the intermission and got a lucky break to cut the deficit in half seven seconds into the second when Tanev’s shot from inside his own zone skipped in front of Hellebucyk and fooled the reigning Vezina Trophy winner for the defenceman’s first with Calgary.

The Flames got their first power play three minutes later, but weren’t able to generate much, while the Jets ended the period on a man advantage that also didn’t produce anything as Winnipeg led 2-1 through two periods.

Winnipeg had a great chance early in the third, but Markstrom robbed Scheifele with the glove.

Scheifele came close a second time later in the period on a power play only to see his shot chime off the post before Gaudreau equalized moments later.