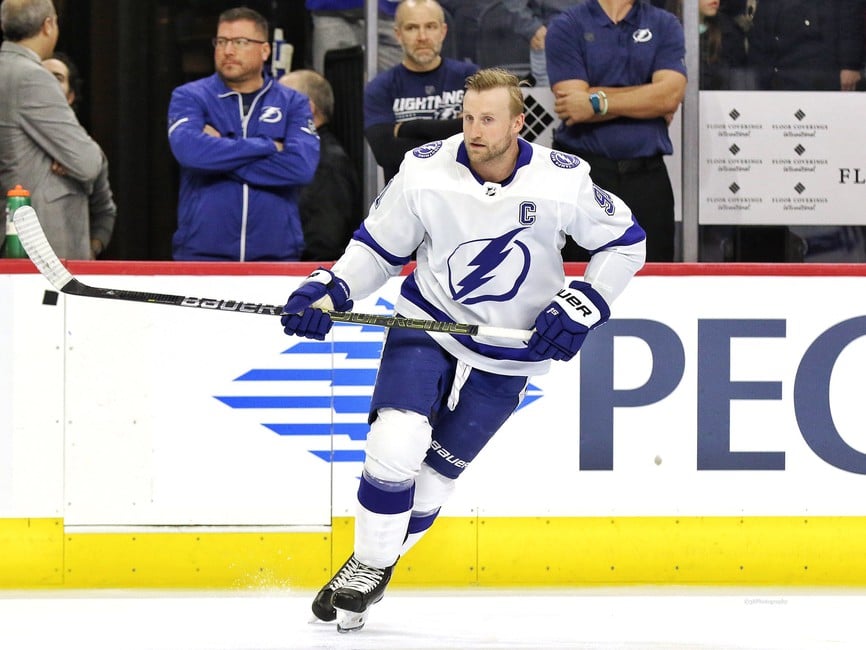 There are few moments in sports as exciting as an NHL hat trick. Whenever a player on your team nets their third goal, it’s impossible to not celebrate, even if the game is a blowout.

For the Tampa Bay Lightning, the first hat trick in franchise history happened in their very first game, when Chris Kontos potted four goals against the Chicago Blackhawks back in 1992.

Since that breakout first game, there have been 60 regular-season hat tricks for the Lightning, along with one postseason tally. Out of those 61 total hat tricks, however, just four have been posted by a rookie.

So, let’s look back on some Lightning history and revel in the rare rookie hat trick.

In somewhat fitting fashion, the Lightning’s top goal scorer of all time is also the first name on this list. On Feb. 2nd, 2009, Steven Stamkos scored a natural hat trick against the Blackhawks in a 5-3 loss.

This first rookie hat trick was a sign of good things to come for Stamkos and Tampa Bay. He would go on to post eight more hat tricks in his career, as well as 422 goals.

The next rookie hat trick occurred five years later, with one of the faces of the Lightning’s rebuild, Tyler Johnson, adding his name to the history books. In his first full NHL season, Johnson rose to prominence alongside Ondrej Palat, as he filled in for an injured Stamkos.

While this incredible season culminated with a Calder Trophy nomination alongside Palat, Johnson did one thing that his linemate did not. On Jan. 25th, 2014, he scored the second Lightning rookie hat trick against the Colorado Avalanche in a 5-2 win.

This game was a sign of the future for Tampa Bay, with Victor Hedman posting three assists and Johnson scoring back-to-back goals in the third period to cap off his big night.

Out of all the players you would expect to be on this list, Cedric Paquette was likely not one of them. He is, after all, a bottom-six forward known more for his punishing hits than his scoring acumen.

However, in his rookie season, Paquette scored his first and only hat trick against the Detroit Red Wings in a 5-1 win. That season, he would post 12 goals and 19 points in just 62 games, showcasing that there was some offensive potential in his game.

So, while he may not be the flashiest player in their line-up, Paquette has been a consistent presence with the Lightning for more than six years now.

Every few seasons, a player comes through the Lightning organization that you know is incredibly talented but is unable to stick around due to depth pushing them out of a starting role. This happened to Jonathan Marchessault a few years back, and it appears to be what happened to Carter Verhaeghe more recently.

After capturing the 2018-19 AHL scoring title, it was clear that Verhaeghe had the potential to be an NHL forward, but often struggled to find his role in a deep Lightning line-up. Despite this limited ice-time, however, he still managed to pot a surprise hat trick during his rookie season in a 9-2 rout of the Vancouver Canucks.

In this game, Tampa Bay scored seven straight goals, with Verhaeghe being responsible for three of those.

While he may have departed the franchise for the Florida Panthers during the 2020 offseason, he still managed to post a hat trick and get his name on the Stanley Cup, which made for a success rookie season for Verhaeghe and the Lightning.

Perhaps the most surprising thing about Tampa Bay’s rookie hat trick list is how recently they all occurred. With so many renown offensive players over the years, you could have assumed a few more of those names would be on this list.

However, Stamkos stands as the lone first-round pick to score a rookie hat trick. Everyone else on the list cut their teeth in the AHL, fighting their way into the nightly line-up before having their breakout game.

So, this is just another remind that great players can come from unexpected places, and that in the game of hockey, anyone can have a breakout night and post a historic hat trick.