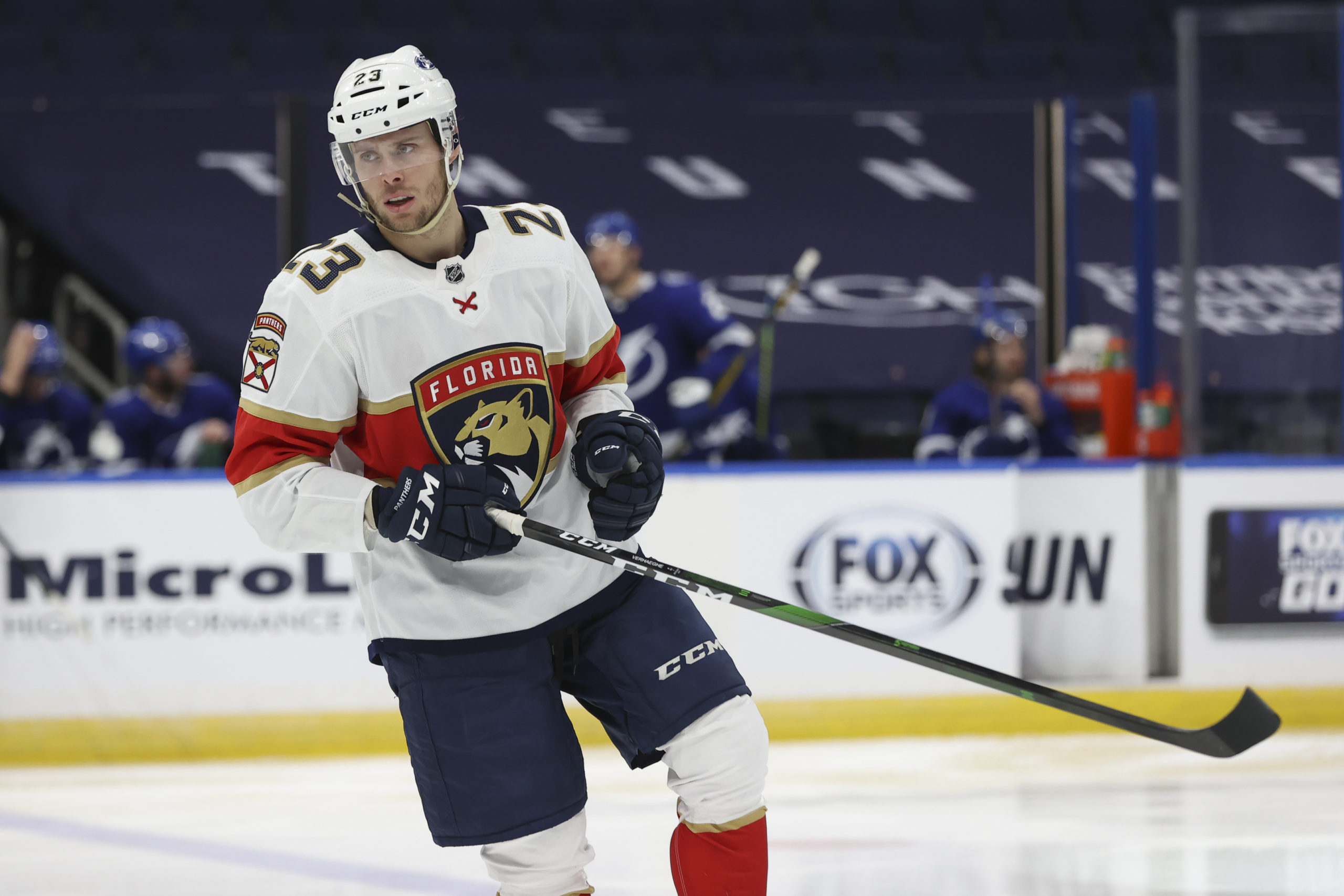 When the Tampa Bay Lightning take on their state rival Florida Panthers in the opening round of the 2021 Stanley Cup Playoffs (the first time these two organizations have ever met in the postseason), the Lightning will be taking on a few familiar faces who spent time with the organization. Yes, we’ve seen these players all season when facing Florida, but now the chips are on the table in a best-of-seven series with the winner advancing and the other team heading home until the fall.

These Panthers were not with the Lightning that long ago, and most of these players played in at least one game for the franchise (although one also did not). They all bring their own skillset to the rink and may pose a threat to their former team.

Gudas started his NHL career in Tampa. He was a third-round selection (66th overall) in the 2010 Draft and spent three seasons developing in the American Hockey League (AHL) with the Norfolk Admirals and Syracuse Crunch before making his Lightning debut during the lockout-shortened 2012-13 campaign. He spent parts of his first three NHL seasons with Tampa before he was traded to the Philadelphia Flyers along with a 2015 1st and 2015 3rd round pick for defender Braydon Coburn. Radko posted the following with the Lightning:

Of all the teams he’s played for, Gudas has spent the most time with Philadelphia (parts of four seasons). He was then traded and spent one campaign (2019-20) with the Washington Capitals. Once that season ended, he signed a three-year contract as a free agent with Florida. Overall, he has 131 points in his nine seasons in the league (28 goals and 103 assists).

Gudas is not a goal-scoring defenseman. Instead, he brings a physical presence to the Panthers’ backend. He is aggressive and can play a rough style that wears on opponents, which has also gotten him into trouble with the league in the past.

Gudas will look to slow down whoever the Bolts throw on the ice and knock them off their game. He brings that intimidation factor at six feet and 208 pounds, and he can throw his body around. Tampa Bay will need to find a way to contain him to be successful, especially if this series comes down to the wire.

Stralman came close to championship glory with the Lightning during his tenure with the club. He joined the franchise as a free agent, inking a five-year deal after three seasons with the New York Rangers. He was a solid complementary piece on the blue line for Tampa and helped them during their 2015 run to the Stanley Cup Final when they took on the Chicago Blackhawks.

Stralman contributed a lot offensively during his time with the Bolts, and he had his best statistical year to date in that memorable campaign in 2014-15 (9 goals and 39 points in 82 games). He also added a goal and 8 assists in 26 games during that magical run. His offense has started to disappear a bit since then, and his last couple of seasons in the Bay Area didn’t produce the same numbers as his first couple. His overall stats with the Lightning are below:

Since joining the Panthers, Stralman put up 19 points (5 goals and 14 assists) in 69 games in 2019-20, and this season, he has 3 goals and 9 points in 38 games. However, he is a strong veteran presence who can help on the ice and in the locker room. Younger players on Florida like Owen Tippett, Gustav Forsling, and Noah Juulsen will benefit from learning from the 34-year-old who has been in the league for 14 seasons (including 2020-21). I would not take him lightly during the playoffs.

Verhaeghe is the most recent player on this list to leave the Lightning. He signed as a free agent with the Panthers in October. In the summer of 2017, he was acquired by Tampa Bay in a trade with the New York Islanders for Latvian goalie Kristers Gudlevskis.

He played a couple of seasons with the Crunch in the AHL before playing in his first NHL game with the Lightning during the 2019-20 campaign. He earned his opportunity with Tampa after his production increased in Syracuse:

It was a big accomplishment for Verhaeghe to suit up for the Lightning. The 2013 third-round pick by the Toronto Maple Leafs had spent seasons bouncing between both the AHL and ECHL before getting the opportunity to join the Crunch and then the Bolts. In his lone season with Tampa, he notched 9 goals and 4 assists in 52 games. On top of that, he played in 8 postseason contests in their 2020 run to the Stanley Cup, chalking up 2 assists in that span.

With the Lightning pressed against the cap general manager, Julien BriseBois had a tough decision to make. Verhaeghe was not re-signed and became a free agent in 2020 when he signed a two-year deal with the Panthers.

Verhaeghe had a strong season in Tampa Bay last year, but his game improved even more in 2020-21 when he tied (with MacKenzie Weegar) for third on the Panthers in points with 36; only Jonathan Huberdeau (61 points) and Aleksander Barkov (58 points) had more.

Verhaeghe scored 18 goals and 18 assists in 43 games this season and made the most of his opportunity to play in Florida, creating new career-highs in goals, assists, and points. He might not have hit his prime yet either and may become more dangerous on the Panthers. The Bolts will have to slow him down because he will burn them if he gets the chance.

Yes, Gusev might not count on this list because he never officially played a game for the Lightning organization. However, he was still drafted by the team, which is why he was included here.

Gusev was drafted by Tampa Bay in the seventh round (202nd overall) in 2012. Before coming over to the NHL, he spent time in the Kontinental Hockey League (KHL) with a few different teams, including CSKA Moscow, Amur Khabarovsk, Yugra Khanty-Mansiysk, and SKA Saint Petersburg. He became a dominant force in the KHL and was a key contributor in SKA Saint Petersburg winning the Gagarin Cup in 2017. He also was fortunate enough to have solid teammates on SKA Saint Petersburg to learn from, including Pavel Datsyuk, Ilya Kovalchuk, Vadim Shipachyov, and Evgenii Dadonov.

Gusev posted the following regular-season numbers in the KHL:

He remained in the KHL after he was drafted by the Lightning and never came to North America while he was tied to the organization. He was acquired by the Vegas Golden Knights in a 2017 Expansion Draft deal that also included a 2017 second-round pick and a fourth-round selection in 2018 as incentive for the Golden Knights to select defenseman Jason Garrison. Gusev signed a one-year entry-level contract with Vegas in April 2019 but never suited up for them either. He was then traded to the New Jersey Devils, where he signed a two-year contract.

After a stellar first NHL campaign in which he chalked up 44 points (13 goals and 31 assists) in 66 games, Gusev dipped in production. In 20 games with the Devils this season, he had 2 goals and 3 assists before management decided to cut ties with the 28-year-old winger and placed him on unconditional waivers early last month for the purpose of buying out his contract early. However, he wasn’t without a home for long. Florida signed him to a one-year deal a couple of days later, and he finished the season with 2 goals and 3 assists in 11 games with the Panthers.

While he has not had the impact on an NHL team that he had in the KHL, Gusev will hit his stride. Eventually, he may transition his game fully, and when or if he does, other teams should beware. He has speed and good hands to match, and he could be a lethal weapon for Florida heading into the playoffs and in the future. He should not be taken lightly by Tampa Bay because if he does break out during this round, he could be a nightmare to deal with.

There are a few players on the Panthers who have a history with the Lightning organization. There is a connection between the Panthers and their former teammates who have stayed in Tampa Bay, and they may have an impact on this series. It will be up to the Lightning to shut them down if they want to be successful.

I have been a hockey fan for most of my life, and have played the game myself for more than six years. I graduated from the State University of New York at Oswego in 2018, with a bachelor’s in Broadcasting & Mass Communication. Previous positions held include being a Sports Analyst for Oswego’s student-run TV station, WTOP-10; News/Sports Intern for WIVB-TV Channel 4; and Sports Beat Writer Intern for Pro Player Insiders.