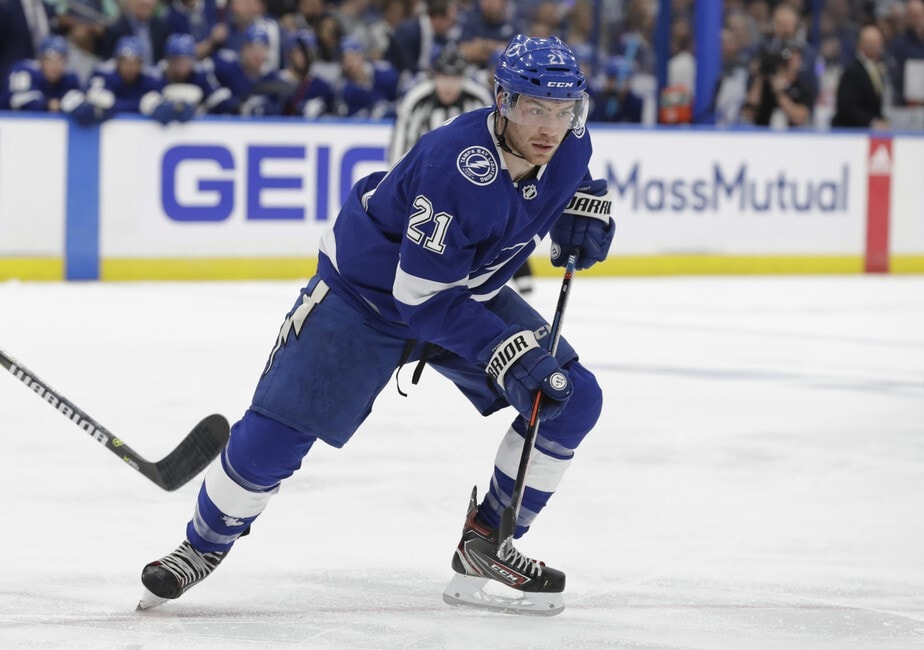 On Saturday, the Tampa Bay Lightning were defeated by the New York Islanders by a score of 3-2 to even up the Stanley Cup Semifinal series at two games apiece. The Lightning had a dreadful second period, giving up three goals and failing to find the back of the net. Brayden Point scored just under four minutes into the third period to spark a comeback bid that ultimately proved to be too little, too late. Although the team fell short, Point is quietly etching his name into the record books.

Point has played an instrumental role in the Lightning’s success in recent seasons, especially in the playoffs. During the Lightning’s 2020 Stanley Cup run, he tallied 14 goals and 19 assists in 23 games. This season, he picked up right where he left off – he has 16 points in 15 games and leads the league in playoff goals with 12. He is second in the NHL in playoff points, trailing only his teammate and linemate, Nikita Kucherov. Moreover, his goal on Saturday against the Islanders extended his goal streak to seven straight games.

Despite his incredible form, Point has not garnered the amount of attention he deserves. His goal streak is a historic one. He is tied for the second-longest playoff goal streak of all time. He trails only Reggie Leach, who scored in 10 straight playoff games for the Philadelphia Flyers during the 1976 postseason. Point is the first to score in seven straight playoff games since Claude Lemieux did so in 1997.

To say that Point is on fire would be an understatement – he’s scored 9 goals in his last 10 games. If you include the final five games of the 2020 Playoffs, he has scored 17 goals in his last 20 postseason appearances. It is safe to say that the 25-year-old forward has blossomed into a prolific playoff goalscorer.

Point’s goal on Saturday was the 34th playoff goal of his career, all of which have been in a Bolts uniform. He passed Lightning legend Martin St. Louis to take third place in franchise playoff goals scored. Point did so in 59 playoff games, nearly the same number of postseason contests St. Louis played in total with the Lightning, 63.

Point still has work to do if he’s going to take the franchise lead in playoff goals, but it is not impossible. He only trails Ondrej Palat by one goal and Kucherov by seven goals. It is important to note that Palat and Kucherov have played in nearly double the number of playoff games, 107 and 105, respectively.

Point is sixth in franchise playoff points, 66. Palat leads him by one point while Steven Stamkos and St. Louis lead him by two points. However, catching up to Kucherov and Victor Hedman will be a difficult task. They currently have 119 and 84 playoff points, respectively. Point is still in his youth and if his contract gets extended beyond the 2021-22 season, I wouldn’t bet against him taking the franchise’s top spot in the future.

When Point takes the ice in Game 5 of the Stanley Cup Semifinals, he will look to score in his eighth straight game. If he does, he would take sole possession of the second-longest playoff goal streak in NHL history. Assuming that Palat doesn’t score, Point would also tie Palat for the second-most playoff goals in Lightning franchise history.

The Lightning will attempt to take a 3-2 series lead as they face off against the Islanders in a critical Game 5 at Amalie Arena on Monday at 8:00 PM EST.

Andrew is a freelance writer who covers the Tampa Bay Lightning at The Hockey Writers. He is a passionate hockey fan who grew up near Tampa, Florida. He is a father to a Golden Retriever and is studying to be a Physician Assistant. Follow me on Twitter: @Andrew_Mulville