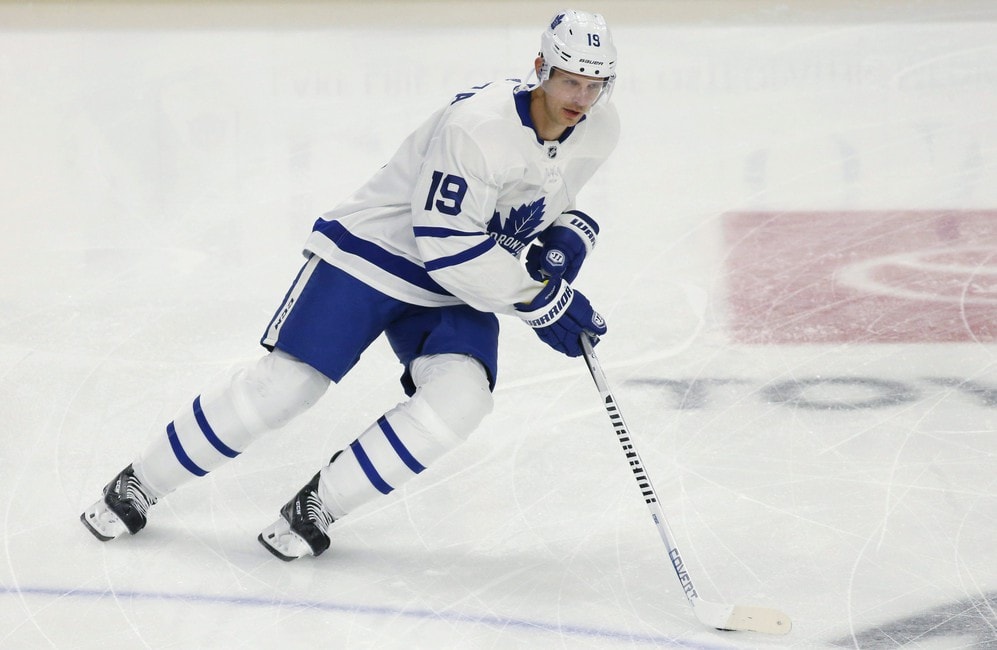 In this edition of Toronto Maple Leafs’ News & Insights, I want to share news about last night’s game in which the team clinched a playoff spot with a 4-1 victory over the Montreal Canadiens. However, in addition to the team milestone of making this season’s playoffs, during the game a number of individual milestones were set by team members. I’d like to focus on those milestones in this post.

Item One: Nick Foligno’s Becoming Part of the Team

After the game as I watched the interviews, I couldn’t help but think about all the unique individuals on this Maple Leafs’ team – both players and coaching staff. During an interview a few days ago, Nick Foligno spoke about being welcomed by the team and how he was building relationships already within the organization.

Foligno pointed out how great the organization was helping him learn the system and feel at home. His bottom line was that the way he was treated helped him better understand why this particular Maple Leafs’ team had been so successful. Now he’s a part of it. During his repeated interviews he seemed happy to be with the team – could be his father’s history, could be his competitive juices have begun flowing as he thinks about the possibility of a Stanley Cup.

A huge part of this season’s team is head coach Sheldon Keefe. Most Maple Leafs’ fans know that Keefe was drafted by the Tampa Bay Lightning during the second round (47th overall) of the 1999 NHL Entry Draft; however, his NHL career was cut short by an injury. I often wonder if he thinks about what might have been when he watches his team play. He did admit last night, in a post-game interview, that once he got caught up watching the game rather than coaching the game.

As he described it, there was a moment Wednesday night when he just found himself admiring two of his older players – now fourth-liners Joe Thornton and Jason Spezza skillfully “snapping” the puck around in the offensive zone. The moment wasn’t lost on Keefe and he noted, perhaps more as a fan than a head coach, that:

“Those guys have accomplished a great deal. They’ve been elite, elite players for a very long time. To have them teaming up for us in that role and being such great leaders for us, it’s outstanding. Very cool for them to have their own moments.”

Keefe must have considered his own NHL career because he added: “I was telling Joe I don’t think I touched the puck 1,100 times in my time in the NHL.”

What’s interesting about the 1100 assist milestone Thornton set last night against the Canadiens was how many of the top seven of the NHL All-Time Assist Leaders were born in Ontario. Specifically, Thornton (born in London, Ontario) became the seventh player in NHL history to record 1100 career assists. Thornton set the mark on Jake Muzzin’s (Woodstock, Ontario) goal during Toronto’s (Ontario) 4-1 win over Montreal (Quebec).

Jason Spezza scored two assists in the 4-1 victory on Wednesday when he set up insurance goals by Muzzin and Adam Brooks to help the Maple Leafs extend their lead to 4-1 in the last two periods. Spezza remains productive and has scored four points during his last three games.

In the most interesting goal of the game, the 37-year-old fourth-liner stole the puck from Jake Allen when the Canadiens’ goalie misplayed it behind the net and fed 24-year-old Adam Brooks alone in front of the net for his third goal – for Brooks, it’s been one power-play goal, one short-handed goal, and one even-strength goal.

In addition to Thornton’s 1100 career-assists milestone, Spezza also set a milestone of his own. His two assists tied him with Canadiens’ legend Maurice (Rocket) Richard for 99th on the NHL’s all-time scoring list with 966 points. Spezza’s 966 points have come in 1,170 games, while The Rocket scored his points in 978 games.

A typically humble Spezza noted that equalling Richard’s point total put him in ”Pretty elite company. He (Richard) was quite a bit better than I am, but still pretty neat to do it here (in Montreal, where Richard played). To be even in the same breath as a guy like that is pretty cool.”

What’s Next with the Maple Leafs?

One day, there’s more than a chance that Maple Leafs’ current star Auston Matthews will also be setting his own NHL records. There’s no better goal-scorer in the game right now than Matthews has become.

As the 23-year-old Matthews said after the game, ”We’re playing with a couple living legends (Thornton, 41, and Spezza, 37). It’s pretty awesome at this stage of their career how passionate they are about the team, about winning, about performing every night.”

Matthews is so fortunate that his development as a player and a person has been influenced by being teammates with such great players (and models) as Spezza and Thornton. He was also greatly influenced by another NHL record-holder Patrick Marleau, who last week set the NHL’s record for most games played. Marleau’s first order of business was to thank the training staff and other behind-the-scene workers.

Matthews – and teammates – have a great opportunity to learn to play the game “the right way” and become solidly professional hockey players. I have hope for this team this season because of its veteran leadership.

The Old Prof (Jim Parsons, Sr.) taught for more than 40 years in the Faculty of Education at the University of Alberta. He’s a Canadian boy, who has two degrees from the University of Kentucky and a doctorate from the University of Texas. He is now retired on Vancouver Island, where he lives with his family. His hobbies include playing with his hockey cards and simply being a sports fan – hockey, the Toronto Raptors, and CFL football (thinks Ricky Ray personifies how a professional athlete should act). He looks forward to sharing his insights about the Toronto Maple Leafs and about how sports engages life more fully. His Twitter address is https://twitter.com/TheOldProf