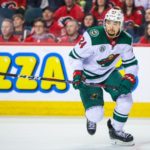 Elliotte Friedman of Sportsnet:  A few notes have popped up this week including Kyle Dubas “investigating every good defenseman on the market”.

One player noted was Mathew Dumba from Minnesota, who has three years left on his current deal. Dumba underperformed so far this year but a change of scenery may help. Ultimately, the players’ play decides whether a deal will be needed or not.

Also, there is a growing sense is Montreal makes very little in the way of moves as they look ahead to 2021. Tomas Tatar and Jeff Petry stay barring some offer that cannot be refused. Montreal feels leery about trying rentals just to make the playoffs.

Then there are the Buffalo Sabres who have made the playoffs once in Terry Pegula’s nine years as owner. A sense of gloom and doom looms with more trades perhaps on the horizon. That may wait until the summer, however.

Joe Thornton trade requests seem like something that would have to come from Joe Thornton.

Chris Kreider still is between an extension and a trade. This expects to go right up to the deadline. Then, there are the New York Rangers’ three goalies. A decision could be punted until the summer as New York appears in no rush.

Will this be the year the trade deadline is a total dud? Brian Burke thinks so especially this year. However, something occurs unexpectedly most of the time. Stay tuned.

Some interest existed for former NHL’er Nikita Nesterov. However, it appears now that the ex-Tampa Bay and Montreal player will re-sign a long-term deal in Russia.

Dennis Bernstein of The Fourth Period:  The latest scouting list for tonight’s game in Los Angeles.

Early check-in from Staples Center, no surprise on extensive scout list for TBL-LAK: