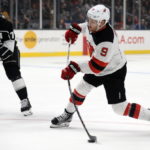 Petrovic could get a deal from the Bruins

Jim Matheson: There is the sense that the Boston Bruins could sign PTO defenseman Alex Petrovic to a two-way deal. He would get a good amount of money if he’s on their AHL team.

James (@Account4hockey): Chris Johnston said on Sportsnet 650 on Monday that he expects the Vancouver Canucks to trade forward Jake Virtanen to a team that has a player that could use a change of scenery as well. It’s not likely to happen in the next week or so though.

Ken Wiebe: (after the Flames signed RFA Matthew Tkachuk) “Another day, another RFA signs a bridge deal with a higher salary in the third year, setting the stage for a larger qualifying offer than the AAV. #NHLJets would probably prefer to avoid that with Patrik Laine, but they don’t want to start the season without him either”

The Devils and Hall haven’t exchanged numbers yet

Mike Morreale of NHL.com: New Jersey Devils GM Ray Shero met with Taylor Hall‘s agent over the weekend. Though they remain in close contact, they are not close to a deal according to Hall.

“I know they had a meeting and I think it went well and there’s some amount of interest on both sides, but there’s no numbers discussed or term, dollars or anything like that, so I wouldn’t say that there’s anything close right now, just because it hasn’t been discussed,” Hall said. “I’m happy (the dialogue is taking place). I think it’s important for both sides and it sounds like there are some things to be worked on with both sides, but I think my agent and Ray have a good relationship, and obviously I have a good relationship with him, so we’ll see where it goes.”

Agent Darren Ferris said that talks have been meaningful, it’s too early to say anything is imminent.

“I’m not in the meeting (with Shero and Ferris), so for me to say what was said, all that would be secondhand information. To say that a deal is imminent or that it could be close … I mean, there weren’t even numbers discussed, so that’s when you have to just let things take shape and see where they go.”