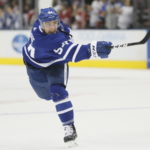 Edmonton Oilers – Have Jesse Puljujarvi also looking for a change of scenery. Ho-Sang played with Connor McDavid in minor midget, and actually outscored him one year.

Boston Bruins – Could use some offensive depth. They could send over a draft pick or mid-level prospect.

Arizona Coyotes – Could use some more higher-end skill. Vinnie Hinostroza hasn’t done much this season on the third line. Christian Fischer seems to have fallen out of favor and is back on the fourth line. Lawson Crouse also hasn’t lived up to his potential.

Carolina Hurricanes – Pierre LeBrun reported earlier this month that they’ve kicked tires on Ho-Sang and Puljujarvi. Would Ho-Sang be a top-nine improvement? Would they give up Trevor van Riemsdyk or Jake Bean? The Hurricanes have six draft picks in the first three rounds.

Ottawa Senators – Have the room to add and haven’t shied away from taking a shot at a ‘castaway’ – see Anthony Duclair and Vladislav Namestnikov.

Things are tense in Toronto

James (@Account4hockey): Chris Johnston said earlier this week on Sportsnet 590 that if the Toronto Maple Leafs continue to play this way in a few months, there will be changes – either personnel or coach. Johnston doesn’t think a coaching change is as inevitable as some people do.

James (@Account4hockey): Johnston adds that things are a little tense around the team and it’s not all fun. Coach Mike Babcock hasn’t been overly critical of their core players to help manage the media pressure.

Luke Fox of Sportsnet: Toronto Maple Leafs defenseman Tyson Barrie hasn’t put up the numbers yet as he continues to adjust the Leafs systems. His power play time is down almost half since coming to Toronto – 4:03 down to 2:11. Barrie’s o-zone starts are down to 53.2 percent from 72.1 percent last year. Barrie will be an unrestricted free agent after the season.

“It’s obviously a big year for me,” Barrie says.

“I’ve been in the league a long time, and I’ve had some good years in the past, and you put a lot of pressure on yourself to have a good year going into free agency. You know, it’s still early, so there’s lots of time.

“I’m not a UFA yet. I’m still a Toronto Maple Leaf and trying to make this work here.”