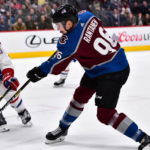 The Avs and Rantanen closing the gap on a new deal

Chris Johnston: Colorado Avalanche restricted free agent forward Mikko Rantanen is not skating with SC Bern anymore and is going back to Helskinki.

It is believed that they are making progress on a contract.

Pierre LeBrun: There is still some work to be done on a deal. Will the Avalanche go above $9 million on a long-term deal? Would Rantanen go below $9 million? $9 million a season seems to be the threshold.

David Pagnotta: Contract talks with the Avs and Rantanen were thought to be farther along than Patrik Laine‘s before he signed.

It’s believed they are closing the gap.

AJ Haefele of The DNVR: Mikko Rantanen to Swiss television reporter at the Teleticino.

“It’s closer than it was in August,” Rantanen said of contract talks. “That’s automatic because the season is a week away. We’ll see what happens. I cannot say that much more but I think it’s closing in.”

When asked if he’d prefered a long-term or short-term contract.

“I don’t want to comment on that,” Rantanen replied. “I just want to play and it doesn’t matter really what it is. I just want to get it done and we’ll see what happens.”

“I’m going to be straight forward and say no,” he said when asked about both players by TSN Radio 690’s Tony Marinaro. “I made one offer sheet and that’s it.”

Bergevin said they are getting trade interest in goalie prospect Cayden Primeau.

“I’ve received calls in the past, yes,” he told TSN Radio 690. “A few. Unless you offer me a number-one centre around the league, which is not going to happen.”