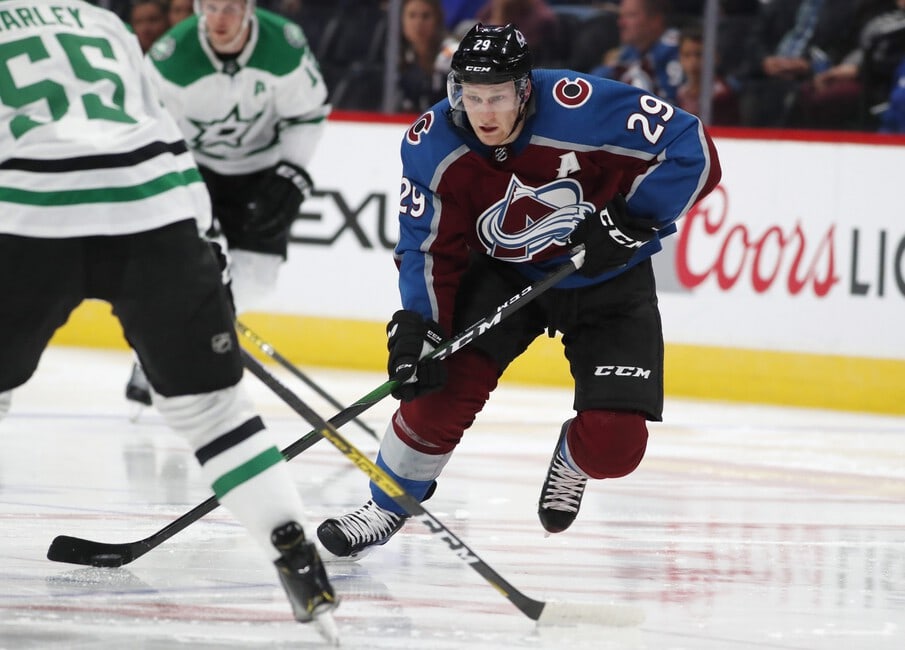 In today’s NHL rumors rundown, Colorado Avalanche captain Nathan MacKinnon talks about his team-friendly deal and whether or not he’d be willing to take another one to keep the Avs roster together. One scribe took a look at realistic options for the Toronto Maple Leafs this offseason and suggested they can’t really do much. Is Jeff Petry going to play for the Montreal Canadiens? Finally, the Buffalo Sabres are taking a lot of calls, is there a chance they make a move, maybe a bunch of them?

MacKinnon told Forbes’ Jordan Horrobin that he realizes his current deal is a bargain for the Avalanche and that maybe he would have been better served to go the bridge contract route but he’s not upset about his decision to lock in long-term at $6.3 million. He notes, “I was just excited to get paid that much money at such a young age.” He added, “Obviously it’s pretty (team) friendly now, but I was worth that at the time.. “… I have no regrets.”

When asked if he would be willing to take another team-friendly contract again, MacKinnon responded, “On my next deal, I’ll take less again. Because I want to win with this group.”

This is excellent news for the Avalanche who have some serious internal housekeeping to do with contracts for players like goaltender Philipp Grubauer, forwards Gabriel Landeskog and Brandon Saad, plus a RFA contract for defenseman Cale Makar.

According to Kevin McGran of The Toronto Star, this will be another year of budget signing for the Maple Leafs. Forward Jason Spezza will likely return on another league-minimum deal and the team will try to bring in different players at league minimum to shake up the roster a touch, but otherwise, don’t expect much change.

Shanahan and Dubas made it clear on Wednesday that they are doubling down on the plan that got them here. At this point — seven years into the Shanaplan — they are betting their futures, their reputations and quite likely their jobs on the core of Auston Matthews, Mitch Marner, John Tavares and William Nylander.

source – ‘Fixing the Leafs: Why trading Morgan Rielly should be on the table. And what if Mitch Marner is their DeMar DeRozan?’ Kevin McGran – Toronto Star – 06/05/2021

McGran adds, that by refusing to consider moving any of his core four, Dubas is essentially committed to coming back with the same roster. He says, “Maybe not the same players, but the same types of players.” For example, if the Leafs sign Zach Hyman to a deal, Frederik Andersen will need to be replaced by a less expensive goalie. He also notes that if the Leafs were to lose Alex Kerfoot in the NHL Expansion Draft, they’d have another $3.5 million in cap space, but would probably use it to find another third-line centre. Or, if they lose Justin Holl they would be immediately looking to replace him with a big, right-handed defenceman.

If the core four is staying, the only way the Leafs really get a chance to shake up this team is if they trade Morgan Rielly.

Petry a Game-Time Decision For Canadiens

Canadiens head coach Dominique Ducharme says Jeff Petry is still being evaluated and will be a game-time decision. It will be Alexander Romanov or Xavier Ouellet replacing Petry if he can’t go in Game 4 on Monday evening. Petry was forced to leave Sunday’s Game 3 early due to an upper-body injury.

It was a strange incident where the defenseman appeared to get his hand caught in a camera hole in the glass, which forced him to go to the dressing room.

As per Darren Dreger of TSN, fans shouldn’t by shy of things to talk about when it comes to the Buffalo Sabres. He writes: “Aside from the ongoing coach search, NHL clubs are calling Buffalo with interest in a number of players, including Jack Eichel. Initial conversations that will increase as we get closer to the Draft.”

The Sabres really have a chance to make major changes in one off season if they do things right. The team could trade Jack Eichel and get a 1st-round pick, plus a player and a prospect, they could move Sam Reinhart who will have value (possibly a 1st and a prospect) and they’ll have their own first-overall selection where they can take Owen Power.