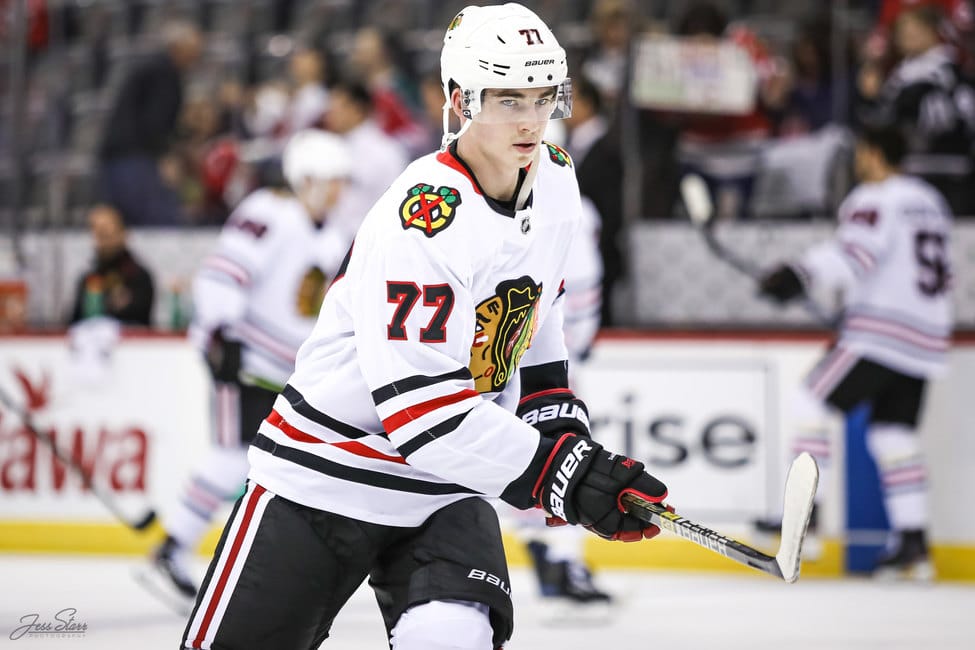 In today’s NHL rumors rundown, there is talk the Chicago Blackhawks are officially in the running to acquire Jack Eichel. What would be going back the other way? Meanwhile, the Arizona Coyotes are looking to trade Oliver Ekman-Larsson again, the St. Louis Blues might be interested in Matthew Tkachuk and the Edmonton Oilers have a certain amount earmarked to spend on Ryan Nugent-Hopkins. Finally, will there be a coaching staff change in Toronto as the Maple Leafs get calls about their assistant coaches?

Larry Brooks of the New York Post reports the Blackhawks are among the clubs reaching out to the Sabres about Eichel’s trade availability. They’ll join teams like the Anaheim Ducks, Philadelphia Flyers, Minnesota Wild, Los Angeles Kings and New York Rangers in pursuit of the center. Brooks notes that the Blackhawks have the ability to put a decent package together that could entice the Sabres, key to the deal being young center Kirby Dach and their first-round pick (11th overall) in this year’s draft.

Brooks does point out this deal could hinge around the uncertain health of center Jonathan Toews, who is really the only top-six center on the club. It’s not clear if he’ll be returning for the 2021-22 season.

If Toews is back, there are salary cap concerns, but the Blackhawks will get some relief with Brent Seabrook and Andrew Shaw on permanent long-term injury reserve. Not only that, but the Blackhawks are rumored to be inquiring about high-end defensemen Seth Jones and Dougie Hamilton. Salary cap issues will play a factor here since the club can’t do all of these moves.

Sportsnet’s Elliotte Friedman reports the Coyotes will, once again, try to trade Ekman-Larsson. This will be the second time as the organization attempted to deal their 29-year-old captain. The last time, he was only willing to consider the Boston Bruins and Vancouver Canucks.

Friedman said this time around, the team will go about this a little differently. Instead of seeing who Ekman-Larsson will be willing to join, the Coyotes are going to shop for the best deals, then approach the defenseman about them and see if he’s comfortable enough to finalize a trade.

As per Ben Frederickson of STLToday.com, the Blues are watching closely to see what happens with the Calgary Flames, specifically as it pertains to Tkachuk. There’s been some talk in the past that most players are up for discussion when it comes to possible trades out of Calgary, and while the Flames would really have to be considering a massive shakeup if Tkachuk goes, he’s not an untouchable.

Tkachuk has one year remaining on his current contract worth $7 million. He’ll become a restricted free agent next summer. Frederickson writes:

Unlike some, I don’t think the Blues need to massively rebuild this offseason. What they do need, though, is a decision on their direction. If the Berube-preferred style is the right direction, and the Blues have a ring that suggests it should be, the team needs to start prioritizing players who can and will play that way, every game, no matter what.

Oilers Have $30 Million Set Aside For Nugent-Hopkins

If the Oilers are going to get a deal done with Nugent-Hopkins, it sounds like they might have to do so within a certain allotment of money. With a number of items on GM Ken Holland’s to-do-list, there is a pre-determined amount of money set aside to finalize an extension for the pending unrestricted free agent.

As per Kurt Leavins of The Edmonton Journal:

“It has been suggested to me by several wise, in-the-know people that Holland probably has a brown envelope with about $30m sitting in it. That amount of cash could buy a shorter-term contract with the player at a higher AAV. Or, as I suggested in this space last week, Nugent-Hopkins could look at a longer-term security but with a lower annual cap hit.”

The key is the $30 million. If the buzz is right that this is the amount of money Holland is comfortable spending, the Oilers have it in their head that $5 million by six years or $6 million by five years is where they’re offers stop.

During Saturday’s Headlines segment, Friedman revealed that other teams have asked permission to speak to a couple of the Maple Leafs assistant coaches regarding other jobs. The NHL insider didn’t provide any specifics about who is asking and which coaches would be leaving, but there could be changeover this summer.

If so, expect to hear the name Bruce Boudreau attached as a potential replacement coach for someone who departs.