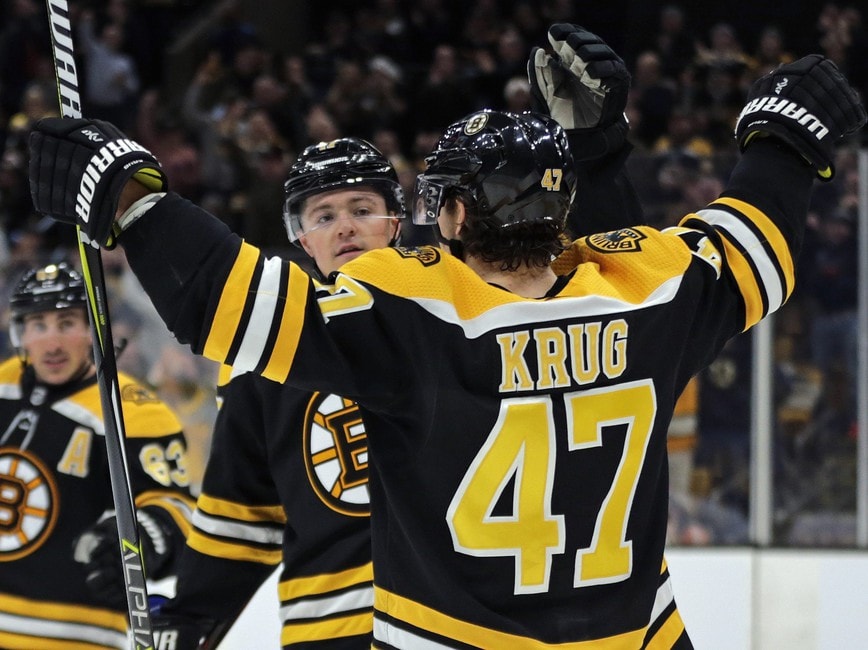 In today’s NHL rumor rundown, there is news the New Jersey Devils might go big-game hunting for a defenseman, details about what the Edmonton Oilers have offered Anton Slepyshev are out there and Torey Krug makes more comments about his contract status with the Boston Bruins.

Will The Devils Pursue a Big-Ticket Free Agent?

NORTHJERSEY.com is reporting, via Abbey Mastracco, that this might be the year the New Jersey Devils spend a huge amount of money in free agency to land a big-name defenseman. She notes, “Maybe a new GM will see it necessary to bring in some more established NHL players instead of waiting on talent to develop.”

She doesn’t mention who the Devils might have their eyes on, but another scribe did.

The Athletic’s Corey Masisak notes that the Devils could also use the trade market to address their need for experienced blueline depth. He suggested targeting clubs squeezed for salary cap space, potentially going after someone like Mikhail Sergachev from the Tampa Bay Lightning.

Maybe the Blues don’t have room for Colton Parayko and Vince Dunn once Alex Pietrangelo signs? Or the Bruins don’t have room to sign Torey Krug this summer and Brandon Carlo next year? The Sabres still have extra defensemen, and any non-Rasmus Ristolainen guy from that group could be interesting. The Ducks have traded away a bunch of good, young defensemen over the past few years, so checking in with them periodically is always a good idea.

We noted yesterday in our Oilers-specific rumors and news update that Oilers GM Ken Holland has extended an offer to Anton Slepyshev to return to the team. Details of that offer are starting to trickle in.

Jim Matheson tweeted that Slepyshev’s contract offer was probably between $1 and 1.4 million and that it’s unlikely that he’d offer the same $1.5 million that he gave to Josh Archibald who had a strong season and kills penalties for the team. Apparently, the exchange rate on what Slephyshev was making in the KHL versus what the Oilers have offered means the pay is very similar.

In other Oilers news, speculation from Daniel Nugent-Bowman notes that if prospect defenseman Philip Broberg doesn’t make the Oilers next year, he’ll head back to Sweden according to Holland. The Oilers are also continuing conversations with prospects Markus Niemelainen and Filip Berglund about signing NHL contracts.

We also noted yesterday that Boston Bruins defenseman Torey Krug had made comments hinting that he potentially believed his time in Boston might be coming to an end. Amalie Benjamin of NHL.com added to that story.

Krug noted that contract extension talks have not progressed at all since the NHL was put on pause back on March 12th and he doesn’t know where the Bruins are at with any potential new deal.

“It’s a good question, probably one that many people would like to know an answer to,” Krug said Tuesday. “We haven’t had any talks since this thing has started. I can’t speak for any other UFA that’s in a position like I am, but in terms of my situation here in Boston, we haven’t continued any talks or made any progress in that regard.”

NHL Could Have Purchased Pandemic Insurance

An interesting tweet hit social media on Wednesday from Darren Rovell from the Senior Executive for Action Network HQ which stated:

Wimbledon reportedly paid $2 million a year for pandemic insurance for the last 17 years (Total: $34 Million) For this year’s cancellation as a result of the Coronavirus, Wimbledon will reportedly receive $141 million from the policy.

Popular NHL player agent Allan Walsh commented saying, “Isn’t it on the pro sports leagues like the NHL, NBA and MLB to have business interruption insurance? And if not, why not? Premiums relatively cheap.” He’s got a point and imagine how less drastic things might have been financially for the NHL had they purchased similar insurance.