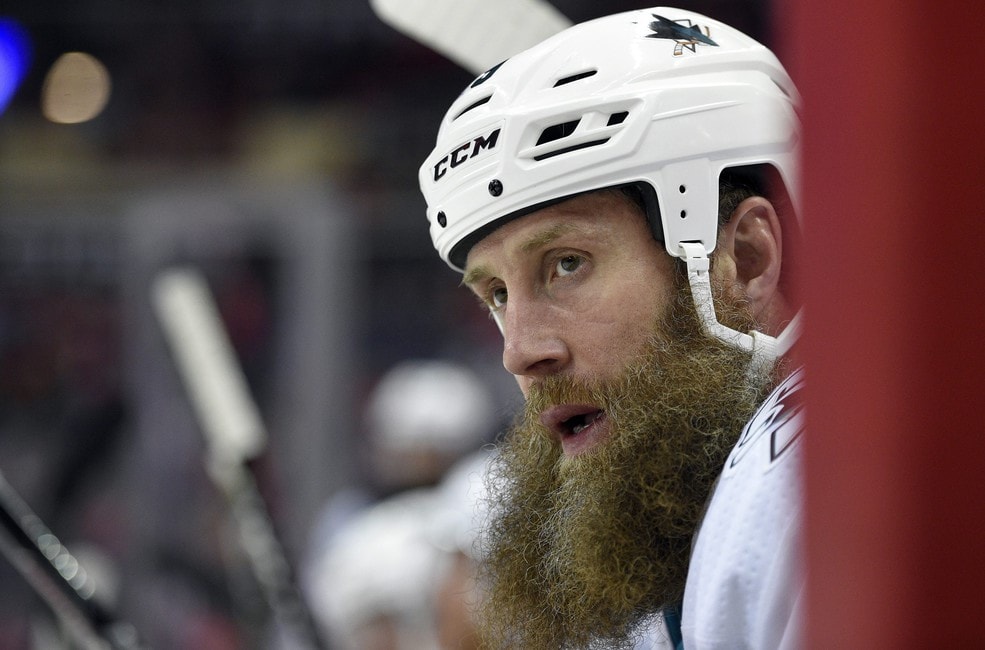 In today’s NHL rumor rundown, there is news that the Toronto Maple Leafs are taking a look at how to manage their blue line if there is a flat salary cap next season, the San Jose Sharks are making plans that may or may not include Joe Thornton and the NHL players are getting their heads together, trying to help the NHL come up with a way to get this and next season in.

Sportsnet’s Luke Fox examined the effect of flat salary cap and the Toronto Maple Leafs only having $81.5 million available to them for next season. He believes the team would be forced to trade for a defenseman and may already be looking at how that would work.

Fox doesn’t expect either of Tyson Barrie and Cody Ceci to be back with the Maple Leafs next season and with only Morgan Rielly and Jake Muzzin as established veterans left on the blue line, Toronto will use young players like Rasmus Sandin and Timothy Liljegren, but shouldn’t rely on them. Fox then wondered what would be more beneficial for Toronto, to add via trade or to add via free agency?

Fox also believes trading a player like William Nylander, Mitch Marner, Auston Matthews or John Tavares is out of the question. That leaves the middle-tier forwards Kasperi Kapanen, Alexander Kerfoot or Andreas Johnsson to land the blueliner they need.

Dubas & Co. have proven creative in finding ways to keep their high-priced, elite talent in blue and white, but those signings were made on the presumption that the ceiling would only go in one direction.

A flat or reduced salary cap would present a host of fresh challenges.

Joe Thornton Says He’ll Be Back

TSN’s Pierre LeBrun reached out to Joe Thornton of the San Jose Sharks and noted that while the veteran center is aware that no scenario for NHL playoffs will include the Sharks, there are many fans curious about what’s in store as far as Thorntons future goes.

LeBrun asked Thornton directly if he was planning on playing next season, Thornton responded with a text saying, “I’ve got years left.” That means, not only will Thornton be back, but he may be looking at more than a one-year deal if he’s not back with the Sharks.

The question now will be how likely it is that Thornton and the Sharks keeping going together or if Thornton looks to another franchise, one that might give him a chance to win a Stanley Cup.

In other Sharks’ news, regarding their next head coach, Curtis Pashelka of The Mercury News writes that GM Doug Wilson could take a long look at former Nashville Predators bench boss Peter Laviolette, should they decide to move away from interim coach Bob Boughner.

Players Suggesting Ideas to the NHL

According to the TSN Insider Trading panelists some high-caliber players are getting together in group online chats and trying to schedule and plan solutions to get this year’s regular season finished, have an offseason and get a full NHL season in next year.

The idea right now seems to be to open training camps in July, (assuming this COVID-19 stuff is all sorted out by then), play in enough regular season games to formulate a playoff bracket, and from there, start the playoffs in early August and award the Stanley Cup in late September.

They added the league when then have it’s quick off-season in October and resume the 2020-21 season in November, getting all the games in on a condensed schedule.

The league is willing to listen to all ideas from the players and it sounds like they’re on the same page with a lot of what’s being proposed.