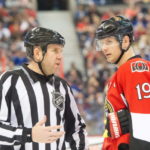 Defenseman Methot isn’t giving up yet

Shawn Simpson:  Defenseman Marc Methot continues to skate and train. There is still a ways to go, but he’s working towards a possible return.

Spezza could be hitting waivers, should the Senators be interested?

“He’s not a great fit as a 4th line center. But gotta say if I’m looking for a mentor for L. Brown, White, or Norris. I’m bringing him back to Ottawa a 700k, and playing him ahead of Anisimov, Ryan, Boedker, or Beaudin.”

Don Brennan: “Not sure why the #Senators haven’t already done what it takes to bring Jason Spezza back to Ottawa. One of the greatest players in franchise history would be a tremendous mentor for all the pups. Wait, is it because he’s not Russian?”

Shawn Simpson: The Senators should consider getting Spezza, re-signing Jean-Gabriel Pageau, and seeing what the trade market could be for Chris Tierney.

Rutherford will let things play out for now and has nothing on the go, but he’ll have some wiggle room at the trade deadline.

“I’m not working on anything now,” Rutherford said. “If somebody calls me today with some idea that makes sense for our team, I would have to look at it. But I’m not calling other teams. I’m satisfied with where we’re at. I don’t know if this will be the team after the trade deadline. We’ve got lots of time to look at it.”