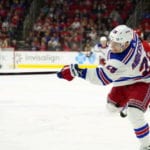 Andersson asks for a trade

Darren Dreger: Forward Lias Andersson has asked the New York Rangers for a trade. Andersson is not with the Rangers.

GM Jeff Gorton will survey the trade market for Andersson during the holiday roster freeze.

Sportsnet: Chris Johnston confirms that Lias Andersson has asked for a trade but they won’t give him away.

“I think the challenge will be trying to trade an asset at this point in time where he hasn’t met the promise that some drafted so high (do),” Johnston explained. “But obviously he’s someone the Rangers can’t just give away for free.”

Andersson was drafted seventh overall in 2017.

“They (the Rangers) were interested in (Jesse) Puljujarvi,” Sportsnet’s Elliotte Friedman added. ” I know they talked about an Andersson for Puljujarvi deal that didn’t happen before December 1. Just out of remote curiosity, I wonder if that gets revisited.”

Raanta not worried about being traded

Craig Morgan of The Athletic: Darcy Kuemper has been getting starters minutes in Arizona, but his injury gives Antti Raanta an opportunity to run with it.

Raanta tries not to worry about the possibility of getting traded, but he knows that Coyotes GM John Chayka could get an offer that he can’t refuse.

“That’s just part of the business of hockey but I’ve been here for three years now and every year we have been getting better and better,” he said. “Now we have a really good chance to do something big so you want to stay with the team and you want to see what we can do.

“My wife is sometimes a little bit anxious about what’s on social media but she’s getting better about that and I wasn’t thinking about that too much. Maybe you read something once in a while, but I had a talk with the coaches and John and it was all positive so I just focused on the games.”

Adin Hill would likely be the backup if Raanta were to be moved, but the Coyotes don’t think he’s ready just yet.