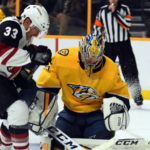 Pierre LeBrun: There have been very preliminary contract extension talks between the New Jersey Devils and Nico Hischier‘s camp.

It’s very early, but they started to talk.

Coyotes not in a rush to trade Goligoski

If the Coyotes are out of the playoff hunt at the trade deadline, the Coyotes could make the 34-year old defenseman available.

Though another team may be interested in adding a veteran defenseman, he does have a big salary. Not sure of what the Coyotes could get in return for him. He has one more year left on his deal after this season.

Paul Skrbina of the Nashville Tennessean: Interview with Nashville Predators goaltender Pekka Rinne. The 37-year old has two-years on his deal, and when asked about thoughts of retiring:

“Not much. I have these two years and that’s how I treat it. I give myself a two-year window. I think it’s fair. If that takes me to 38-39, I don’t want to put any numbers anywhere. Still, I realize it’s close.”

On if it’s difficult to accept/realize that retirement is close.

“Not really. The closer we get to that point, it will be so much different talking about it. I would like to be able to retire where I actually still feel like I’m on top of my game, not just trying to reach numbers, like (playing as a) 40-year-old.”

Not claiming Ho-Sang makes sense for the Oilers

Kurt Leavins of the Edmonton Journal: The Edmonton Oilers obviously didn’t make a waiver claim on Josh Ho-Sang like some may have hoped.

He would only help the Oilers if he were able to play in their top-six, and it’s not like he’s shown that he can even be a consistent enough top-six in the AHL.

If they had claimed him, who would you demote in the lineup?  Zack Kassian? Joakim Nygard? Unlikely.