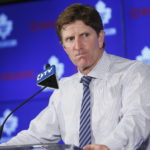 Aivis Kalnins: It’s sounding like Magnus Paajarvi could be joining Lokomotiv Yaroslavl of the KHL.

Michael Russo: Kaprizov’s agent has made it clear several times that their plan is to come to North America next season. Wild GM Bill Guerin plans on going to Russia November 30th to December 3rd.

Sportsnet: Elliotte Friedman said that the Ottawa Senators have been looking for a President of Hockey Operations since last season, and have now decided they are halting the search until after this season.

Igor Eronko: Toronto Maple Leafs GM Kyle Dubas has spent a couple of days in Russia talking to some players that he could possibly sign for next year.

Babcock on the hot seat?

It is up to coach Mike Babcock to get the most of a not very deep and a basically inexperienced roster.

If Babcock can’t get them rolling this year he could lose his job. Toronto Marlies coach Sheldon Keefe is ready to take over coaching the team when the position opens up. Babcock has a $5 million per contract on his side.

Though the season is still really young, there is a sense of “urgency in the air.”