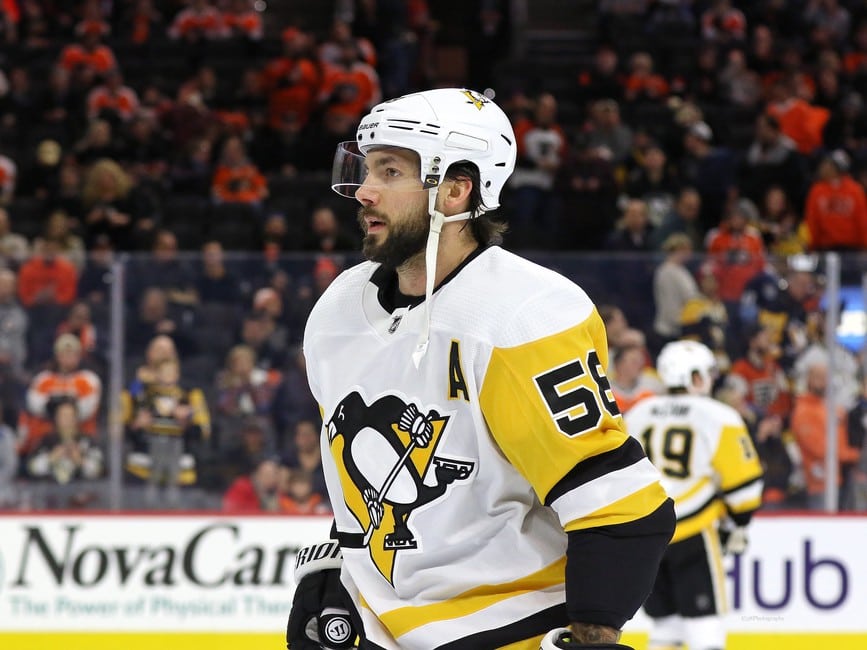 In today’s NHL rumors rundown, there are conflicting reports that Jim Rutherford resigned his position as general manager of the Pittsburgh Penguins because the club squashed a trade he had in the works. Whether that’s true or not, what does seem clear is that there could be big changes for the organization if they’re not contenders this season. Meanwhile, the Vancouver Canucks are reportedly looking for a defenseman via trade, the Toronto Maple Leafs are shuffling depth forwards in and out of the lineup to keep them fresh and there are predictions about three big trades that could still take place before the 2020-21 NHL trade deadline.

While the hockey world was shocked by Rutherford’s sudden decision to resign, one report suggests the reason for his resignation was a disagreement with ownership about a potential trade. Colin Dunlap of 93.7 The Fan in Pittsburgh tweeted that Rutherford was working on a deal to move Kris Letang. Ownership apparently caught wind of the news and squashed the move.

Dunlap wrote, “I am told by multiple sources this morning Jim Rutherford was working on a Kris Letang trade to one of the teams he can be traded to. Ownership did not want him doing this. It forced an untenable situation. So here we are.”

Rob Rossi of The Athletic however almost immediately disputed that report, saying Rutherford was “not working on a trade of any player that management/ownership halted.” Rossi added that Rutherford’s resignation had nothing to do with roster-related matters.

As for what’s next for the Penguins organization, TSN’s Darren Dreger reports during the most recent Insider Trading report that changes could be in store for the team. The hockey insider feels the Penguins owe it to Sidney Crosby, Evgeni Malkin and, to some degree, Letang to have a conversation over the direction of the franchise under new management. He suggests that the players should get a chance to decide if they want to chase a Stanley Cup elsewhere or if it’s more important to retire in a Penguins jersey. He asks, “But, imagine if those names were in play at some point in the near future?”

Canucks Looking at Trade Market for a Defenseman?

According to Sportsnet’s Elliotte Friedman, the Canucks are seeking help on their blue line but he’s not sure the team will find any or pursue a deal if the team’s win/loss record changes. Friedman did mention Montreal Canadiens’ Victor Mete, the Maple Leafs’ Travis Dermott and the St. Louis Blues’ Vince Dunn could all be available, but the asking price on all three players will likely vary.

A trade could depend on whether or not the Canucks are able to climb out of an early hole they dug themselves into this season with some poor play. The more they win, the less likely a move is made.

Maple Leafs Shuffling Players Like Spezza In and Out of Lineup

Despite not necessarily deserving to come out of the lineup, one of the strategies being employed by Maple Leafs head coach Sheldon Keefe is to sit some of the depth forwards and rotate players like Jason Spezza in and out to keep people rested and healthy. It was mentioned during the Edmonton Oilers vs Leafs broadcast Thursday night that a player like Spezza might sit from time to time.

Joey Anderson came in to relieve Spezza during Tuesday’s game. He logged nearly 9:36 of ice time and had a minor penalty with blocked three shots. However, Spezza was right back in the lineup on Thursday as scored the Leafs first goal of the game.

With such a busy schedule, expect this to be a strategy Keefe continues to run with, especially after early injuries to key players affected his line combinations.

“From Day 1 of camp, John Tortorella wanted to expose Pierre-Luc Dubois. This included going on radio the second week, which made it more difficult for GM Jarmo Kekalainen to do his job. Now he continues to use different media platforms trying to justify his position. I have not heard Paul Maurice once say anything about a trade request from both Laine or Roslovic. This could have been operation submarine but, ah well, Torts wasn’t able to help himself.”

Ken Campbell, Matt Larkin and Ryan Kennedy of The Hockey News got together to talk about what names might be worth keeping an eye on when it comes to trades before the end of this season. Campbell went with Bobby Ryan, Larkin with Darcy Kuemper and Kennedy with Taylor Hall.

In Ryan’s case, even though it is believed the forward is open to an extension with Detroit, it ultimately comes down to the fact that he’s going to be worth more to the Red Wings in a trade that nets them a decent draft pick. In Kuemper’s case, there were rumors the goaltender was being shopped this offseason and the Arizona Coyotes are a team in transition. He might still be moved because he’ll fetch a sizeable return. Finally, Hall will get moved if the Buffalo Sabres are not a contending team, which Larkin believes could lead to trade discussions about Jack Eichel.

Speaking of Eichel, Eric Duhatschek of The Athletic recently wrote that the New York Rangers pursued the center during the summer of 2020. If he becomes available, expect the team to pursue him again. Duhatschek writes: “I do believe the Rangers made a hard push on Jack Eichel last summer, but ultimately, couldn’t get anything done.

Duhatschek agrees about Hall playing a big part in what Eichel ultimately does. He writes:

Eichel’s future will likely depend upon how much progress the Sabres show this year and if they can get Taylor Hall to sign a contract extension as a possible UFA.”