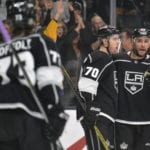 Adam Vingan of The Athletic:  As the dust settles from the Roman Josi extension, one thing becomes clear. David Poile does not have too many tough decisions to make in the next couple of years.

The Nashville Predators’ window expands a bit more compared to other teams with most of their players on team-friendly deals. That time will pass but in the next season or so, the toughest decisions lie with Mikael Granlund and Craig Smith. That is not too bad.

Poile has the luxury of being able to tweak lightly and not have to go for the big splashes in free agency or during the trade deadline. After 2021, the general manager gets to revisit the Pekka Rinne and Juuse Saros deals and then Filip Forsberg after 2022. In the meantime, Nashville enjoys almost a rare time to just let things fall where they may.

Mark Zwolinski of The Star:  The Toronto Maple Leafs placed Nic Petan and Martin Marincin on waivers to clear room for the return of Zach Hyman to the active roster. That kept Toronto just under the salary cap.

Petan was “showcased” the other night but no team claimed the forward so the speculation will only continue as to what happens with him next.

Dennis Bernstein of The Fourth Period:  As the Los Angeles Kings’ season drifts into the abyss err tank once again, the trade winds blow. The main name is Tyler Toffoli who has suddenly been seeing 17-18 minutes of ice time a night. This was after Ottawa general manager Pierre Dorion visited Los Angeles only to see Toffoli had been scratched.

The “showcasing” sets up a potential trade around the 20-game mark or so. It is not an automatic thing, however. Teams talking to Los Angeles will want a little less to deal now. Will Los Angeles be willing to just shed now or will they wait?

Alec Martinez ($4 million AAV through 2021) is another player who could be moved. The 32-year old has just one year remaining on his deal. Also, there is interest from teams on the rearguard already. His steady presence is much sought after but again, maybe closer to the trade deadline.