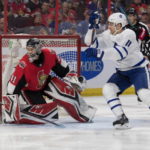 Bruce Garrioch of the Ottawa Sun: Ottawa Senators GM Pierre Dorion has been aggressively working to find another forward. Dorion is looking to strengthen his forward group but won’t make a trade for the sake of making a trade.

Mikkel Boedker‘s days in Ottawa could be numbered as they recalled Filip Chlapik to play in Bobby Ryan spot as he was a healthy scratched. Coach D.J. Smith doesn’t appear to want to play Boedker.

Mark Zwolinski of the Toronto Star: Forward Zach Hyman and defenseman Travis Dermott could be activated by the Toronto Maple Leafs from the LTIR this week – possibly as early as  Tuesday.

Hyman’s physical presence will be a welcomed addition to the lineup.

Management will also have to decide how they want to get back under the salary cap.

Trading forward Nic Petan is one option for the Leafs. He signed a two-year deal last March and carries a $775,000 cap hit. Frederik Gauthier is basically all but certain to remain, but the other fourth line candidates could be moved – Jason Spezza, Dmytro Timashov and Nick Shore.

Petan and defenseman Kevin Gravel had already cleared waivers early this month and could be sent to the Marlies.

The Maple Leafs aren’t expected to put John Tavares on the LTIR.