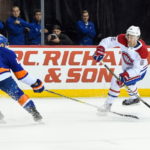 David Pagnotta: The New York Islanders have been trying to trade defenseman Thomas Hickey since last season. He has three years on his deal at a $2.5 million salary cap hit. There may not have been a trade worth taking out there, so he’s on waivers today.

May not be easy to increase Rask’s value

James O’Brien of NBC Sports: Minnesota Wild center Victor Rask may find himself as a healthy scratch to start the season. He may be 5th on the center depth chart and on the outside.

Acquired last season from the Carolina Hurricanes for Nino Niederreiter. He carries a $4 million cap hit through 2021-22. The Wild may have been hoping they could increase his value early in the season in the hope of possibly moving him.

Rask has struggled the past two seasons but did put 45 and 48 points three and four years ago.

Luke Fox of Sportsnet: The Minnesota Wild could use some offensive help. Though he’s not eligible be signed right until later this year, GM Bill Guerin has explored the idea of bringing prospect Kaprizov Kirill over to North America.

Kirill’s KHL contract expires in April and is reportedly open to the idea of coming overseas.

Should the Canadiens trade Drouin?

Matt Larkin of The Hockey News: So there have been reports that the Montreal Canadiens forward Jonathan Drouin‘s name is “out there” as potentially being available for trade.

Canadiens GM Marc Bergevin has already said he doesn’t know where they came from – usually from a basement somewhere in Toronto. Back in 2016 he also said that he wasn’t shopping P.K. Subban and we know how that turned out.

Does trading Drouin – who is 24-years old, and has four years left on his deal at $5.5 million – make sense for the Canadiens?

They could use a top-four left-handed defenseman. Nick Leddy? Drouin is a winger, and it’s not a position the Canadiens are deep at. The attempt to play him at center is over.