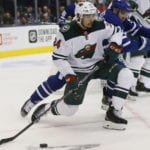 Leafs looked at Dumba – what the asking price could be?

@Kungfu_canuck: Elliotte Friedman said on ‘Lead Off’ today that he’s heard that the Toronto Maple Leafs had looked into Matt Dumba.

A source also told Friedman that the Maple Leafs have basically looked at every potentially available defenseman.

They discussed on the show about the potential asking price for Dumba – Kasperi Kapanen/Andreas Johnsson/Alex Kerfoot, a young defenseman, and a draft pick.

Potential trade targets for the Maple Leafs, and who they could move

Kevin McGran of the Toronto Star: If their forward group can stay healthy, one trade candidate for the Toronto Maple Leafs is forward Dmytro Timashov. If they are looking to move out salary, Andreas Johnsson or Kasperi Kapanen could be on the move.

Improving their blue line and adding goaltending depth are areas the Leafs may look to address.

The Philadelphia Flyers could be looking to move defenseman Shayne Gostisbehere and are looking for help up front.

The Leafs are believed to have some interest in T.J. Brodie and Adam Larsson. The Red Wings will be looking to move Jonathan Ericsson and Mike Green.

Rangers goaltender Alexandar Georgiev gets linked to the Maple Leafs, but reports have them asking for Kapanen. Red Wings Jimmy Howard could be available but he carries a $5.5 million cap hit.

The Leafs could also turn into sellers if things fall apart. Defensemen Tyson Barrie and Cody Ceci could be moved under this scenario for picks and prospects. Jason Spezza might get some interest.

From not going anywhere to trade candidates – Toronto Maple Leafs

James Mirtle of The Athletic: The Toronto Maple Leafs won’t be sellers at the NHL trade deadline. There are areas on their roster that they will be looking to improve on and they’ll have an eye on the present as well as the future when making moves.

Could move if the Leafs decide they are big buyers – Alexander Kerfoot, Andreas Johnsson, Kasperi Kapanen, and Timothy Liljegren.

Could move if the Leafs decide they are small buyers – Trevor Moore, Dmytro Timashov, Frederik Gauthier, Jeremy Bracco, and assorted other draft picks (2020 to 2022).

Most likely to be dealt, for various reasons – Cody Ceci.