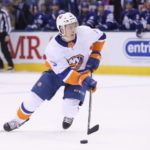 The Maple Leafs have some roster decisions to make

Sportsnet: Toronto Maple Leafs defenseman Travis Dermott and forward Zach Hyman are nearing a return. Both are eligible to come off the LTIR next Saturday. To activate either they are going to need to clear some roster spot(s) either by demotion, waivers or trade.

The Leafs have Nic Petan on a two-year at a $775,000 salary cap, and is one player that is likely on the move.

Elliotte Friedman notes that the Leafs have let teams know that they are open to trading Petan to give him a shot somewhere else.

Sportsnet: While there are teams that are looking at KHL forward Konstantin Okulov, it appears the Toronto Maple Leafs and Montreal Canadiens are the front runners. The 24-year old Okulov is a free agent after the season.

“Other teams believe that Montreal and Toronto are the two favourites for this forward who’s playing with Red Army this season,” said Johnston. “Some of these teams are, you know, wondering if it’s even worth engaging with his camp about trying to bring him over next season.”

Sportsnet: The New Jersey Devils and Nico Hischier agreed on a long-term extension on Friday. The New York Islanders may be looking to do the same for pending restricted free agent forward Mathew Barzal.

“I do believe the New York Islanders have some interest in looking to extend Mathew Barzal before next summer,” said Sportsnet’s Chris Johnston during the Headlines segment on Hockey Night in Canada.

Those negotiations could be “very interesting” according to Johnston as Barzal had more point than Mitch Marner who signed a six-year deal with an AAV around $10.8 million.