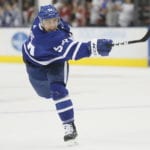 Now is not the time to trade Barrie

Chris Johnston of Sportsnet: Friedman said on the weekend that teams are checking in with the Toronto Maple Leafs about defenseman Tyson Barrie. Smart GMs are seeing him as a buy-low candidate right now.

Barrie only has two assists in 19 games so far this season. He had 59 last year. His power play time has been cut in half and he’s struggling with his confidence.

Now is not the time for the Maple Leafs to trade Barrie. You won’t find a right-handed defenseman at a $2.75 million salary cap hit to replace him.

His poor start is also hurting the pending UFAs next contract. A move to a new team may also not turn things around for him.

Is a coaching change coming soon for the Maple Leafs

Rosie DiManno of the Toronto Star: believes the Toronto Maple Leafs should have fired Mike Babcock after they lost to the Boston Bruins last spring.

Trading Nazem Kadri took a lot of emotion out of the room, something they may be missing now.

Things are pointing towards Babcock losing the players “and that is what kills a coach.”

GM Kyle Dubas is to blame as well. He’s been 50/50 on his trades and signings. Defenseman Tyson Barrie hasn’t worked out and Elliotte Friedman noted that it may be best if Barrie and the Maple Leafs moved on.

A big trade may be needed to shake up the team. William Nylander? A prospect package involving Rasmus Sandin? You don’t want to trade Sandin.

Dubas saying he wouldn’t trade William Nylander after he signed was a rookie mistake.

Before the season one would have thought Babcock needed to get into the second round of the playoffs. Now, “can Dubas even wait until U.S. Thanksgiving?”

The Maple Leafs need to get four or five points over their next three games or Babcock could be gone.

With little salary cap for making a change, their roster change options are limited, and they need to make some type of change.

Babcock didn’t create their roster, but he is steering the ship.

If Dubas does fire Babcock, and the coaching change doesn’t work, Dubas would be next on the hot seat.