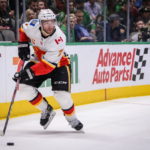 Rick Dhaliwal: An agent sent a text saying the Elias Pettersson is going to cost the Vancouver Canucks $9 to $11 million, maybe more.

Flames could look to move Brodie

The Fourth Period: Darren Dreger reported earlier this week that the Calgary Flames and T.J. Brodie have held some contract talks but they don’t appear to be close on anything.

The Flames have tried to trade Brodie dating back to the 2019 draft – the New Jersey Devils and Toronto Maple Leafs.

If the Flames can’t get Brodie re-signed, or feel that a deal isn’t possible, they could increase their efforts to move him.

Leafs have at least three players on the trade market

James (@Account4hockey): David Pagnotta on Sportsnet 650: “Petan, Marincin out there. Shore’s name is out there too. I know Mike Babcock would like Spezza’s name to be in that group (being shopped) but not sure that he is. Dubas also calling around seeing what backup goalies are available.”

Jonas Siegel of The Athletic: Maple Leafs forward Nic Petan earlier this week before he was sent to the AHL when asked about the Leafs exploring a trade.

“I’m kind of maybe in the unknown just a touch,” he said. “Obviously, you know that guys are coming back in the lineup and things like that.”

Will a team take a chance on Petan with the limited game action he’s seen the past two years (18 games last year and four so far this season)?

Babcock needs to get the Maple Leafs turned around soon

Steve Simmons of the Toronto Sun: Now is not the time to be firing Toronto Maple Leafs head coach Mike Babcock, but if things don’t change with the Leafs play, that time may be coming.

The Leafs lack identity, are not playing up to their capabilities and are lacking structure and competitiveness.

Over their past 70 games, they are on a 90 point pace, which wouldn’t be enough to make the playoffs.

Their top players need to be better, and more consistent.