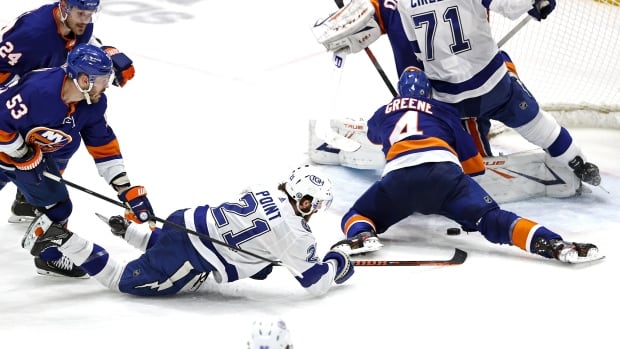 Brayden Point kept up his scoring touch with a tiebreaking goal late in the second period, Andrei Vasilevskiy stopped 27 shots and the Tampa Bay Lightning beat the New York Islanders 2-1 on Thursday night to take a 2-1 lead in the Stanley Cup semifinals.

Yanni Gourde also scored to help Tampa Bay improve to 6-1 on the road in the playoffs.

Cal Clutterbuck scored for the Islanders, and Semyon Varlamov made 23 saves.

Game 4 is Saturday night at Nassau Coliseum, with Game 5 back in Tampa on Monday night.

The Islanders outshot the Lightning 8-5 in a tight third period, but couldn’t tie it. They pulled Varlamov for an extra skater with about 1:48 remaining but couldn’t manage a shot on goal.

Both teams had chances in a fast-paced second period. The Islanders had some sustained pressure in the offensive zone midway through, but couldn’t beat Vasilevskiy. The goalie denied a shot by Adam Pelech with 6 minutes to go and Mathew Barzal hit a goalpost seconds later. Vasilevskiy then denied Barzal’s tip try.

The Islanders tied it late in the second. Off a scramble for the puck in front of Vasilveskiy, Lightning defenceman Eric Cernak attempted to push the puck into the goalie. Clutterbuck and several players whacked at the puck and it went through Vasilevskiy’s feet and in with 2:22 left.

The Lightning regained the lead just four seconds after their power play expired in the final minute of the second. Point got the rebound of a point shot by Victor Hedman and whipped it in past Varlamov as he was falling to the ice with 18 seconds remaining. It was Point’s 11th of the postseason and extended his goals streak to six games. He has eight goals in the last nine games.

The Lightning outshot the Islanders 9-7 in the first and got on the scoreboard first midway through the period. Blake Coleman’s shot from the left circle was stopped by Varlamov. Coleman got the rebound and sent a backhand pass across the front of the goal from behind the line, and Gourde knocked it in from the right side for his third of the postseason with 9:55 left.

Playoffs are proving what most hockey fans already know, you need solid goaltending to win a Stanley Cup. 3:46