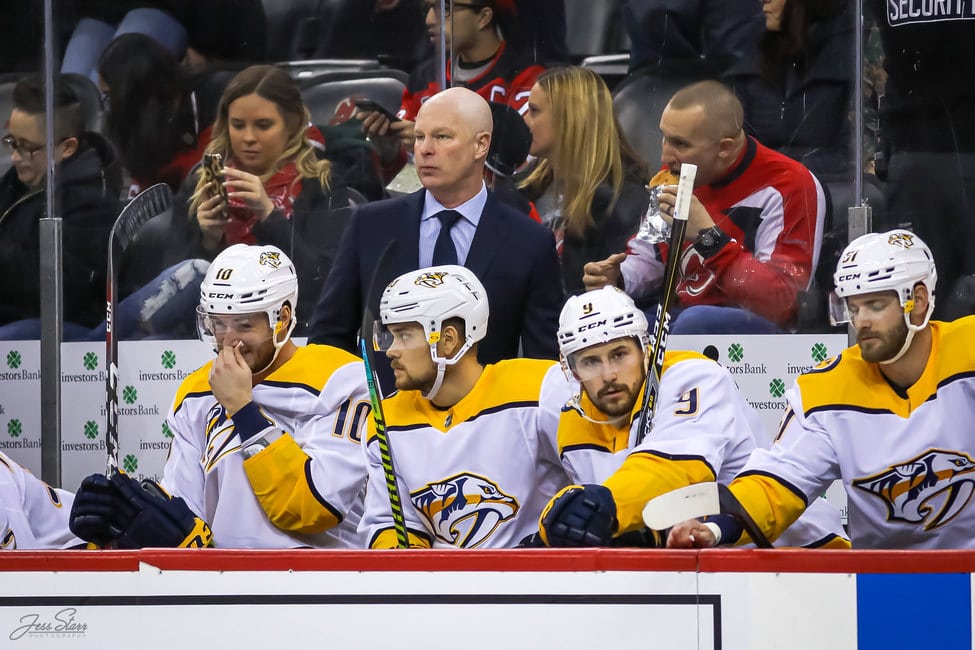 The Nashville Predators are the perfect team to break fans’ hearts. High expectations heading into the season were followed by lackluster efforts that had the team on the wrong side of results on many nights.

The Predators are still outside the playoffs, but just barely. With games in hand, they are set up nicely to control their destiny. A dominant 5-0 shutout win over the New York Islanders on Feb. 13, followed by a huge weekend sweep of the St. Louis Blues gave fans hope that maybe, just maybe, their team had turned a corner.

After that three-game win streak, the Predators looked like trade deadline buyers. There was the feeling that it was full steam ahead to the playoffs and possibly beyond.

However, the team came back down to earth with an uninspiring performance against the Carolina Hurricanes. A 4-1 loss to their Eastern Conference foe pushed the Predators back to the fringe of whether they will be buyers or sellers at the Feb. 24 deadline.

If the Predators can string a couple of wins together in their final two games before the deadline, maybe they’ll feel like buyers again. If general manager David Poile decides that the team is within reach of the postseason, and could benefit from an additional player or two, who is available that would make sense?

For the first time in a long time, the Predators need some blue-line help. Gone are the days when they were exponentially rich on the backend, to the point that they could trade away budding stars and not take an immediate hit. However, they are now paying the bill for losing players like Seth Jones and Samuel Girard.

That’s not an argument against those trades. The Predators needed a center, and hindsight is 20/20. But that doesn’t detract from the fact that the team has liabilities outside of their top-four defensemen.

A major influence on the Predators’ defense is the health of Ryan Ellis. If the 29-year-old can return soon – and it appears that he could be in the lineup next game against the Chicago Blackhawks on Feb. 21 – then every pairing will get stronger. Ellis will resume his top-pairing responsibilities, giving the coaching staff the flexibility to move Yannick Weber to the third pairing, with Dante Fabbro or Jarred Tinordi.

However, to really shore up the defense – with or without Ellis – the Predators need to add a reliable defenseman.

The issue is the Predators’ salary cap. According to CapFriendly, they have $2,473,023 in projected cap space. Most defensemen available, according to TSN, have price tags significantly higher than what management can afford.

To make a notable addition, Nashville would have to trade a player who also has a fairly large cap hit, such as Mikael Granlund ($5.75 million AAV) or Craig Smith ($4.25 million AAV). But moving either or both seems counter-intuitive when pushing for a playoff berth, considering they both have six goals in their last 12 games, Granlund has nine points in that span.

The Predators should be on the hunt for a bargain.

The 27-year-old defenseman – currently with the Blackhawks – has taken a step back since his stellar 17-goal, 60-point season, but he’s still a very serviceable player. As a pending unrestricted free agent with an average annual value (AAV) of $1.2 million, he could help the Predators in the short-term as well as giving Poile some options during the offseason.

The Swedish defenseman plays a more offensive game, similar to Roman Josi and Mattias Ekholm. So, while it may be a mistake to pair Gustafsson with Ekholm, Fabbro and Gustafsson may be an interesting combination.

Gustafsson has also been described as a power-play quarterback. Considering the Predators’ less than impressive 16.4 percent efficiency with the man advantage, he could give head coach John Hynes a new weapon if Hynes gets bored of running the second unit with Calle Jarnkrok on the point.

If Gustafsson stepped into the Predators’ lineup today, his 26 points would rank fourth among the team’s defensemen. Nashville has recently hit a goal-scoring dry spell – averaging 2.33 goals per game since the start of February. Adding a defenseman with an offensive touch who can drive the play wouldn’t hurt.

This one seems little bit of stretch. The 24-year-old New York Rangers defenseman has a very desirable AAV at just $925,000, but he will also be a restricted free agent this summer. Reports from Larry Brooks of the New York Post indicate that the Sewell, New Jersey native could demand $4.5 million to $5 million AAV after this season, (from ‘How Tony DeAngelo could put Rangers in salary-cap hell, New York Post, 01/10/2020).

Hypothetically, if the Predators did land DeAngelo, a new contract and terms would be discussed in the summer. There will be salaries coming off the team’s books, but it’s uncertain which ones. It may be hard to see Matt Irwin and Weber re-signed, but even if they both leave, the Predators will save just $1.35 million.

Dan Hamhuis’ contract expires at the end of this season and he will have to decide whether he wants to return for another year. Even if the 37-year-old doesn’t, that’s only another $1.25 million in savings. Not to mention, Josi’s AAV jumps from $4 million to $9.06 million next season, which the Predators will have to account for.

The biggest problem with this hypothetical trade, however, is what it would cost to acquire DeAngelo. His impressive season combined with his age has elevated his stock to a premium. Poile has his first-round selection in this year’s NHL Entry Draft available, but the Predators have played fast and loose with their number one pick too many times recently, and it’s time to restock the cupboard.

Also, a first-round pick alone might not cut it. General manager Jeff Gorton may want more, making a deal too rich for Poile especially considering the Predators already have a defensive superstar with exceptional offensive talents. He’s their captain.

It would be nice to have a player of DeAngelo’s caliber. Through 57 games this season, the former Sarnia Sting has 45 points. He loves to move the puck and get involved in the play in the offensive zone. He is another defenseman who could help the Predators’ power play and be another threat on the backend when Josi isn’t on the ice.

DeAngelo is sometimes criticized for his lack of defensive skill, which is understandable given how often he tends to pinch and jump into the play. But the young blueliner still has a plus-15 rating while logging 19 minutes of ice time per game.

This may be the most feasible option. The 26-year-old plays for the Los Angeles Kings, a team that has no reason to keep any players who aren’t prospects. The Brockville, Ontario native is an unrestricted free agent after this season with an AAV of $1.5 million.

Hutton could be more than just a rental. The Vancouver Canucks gave him a two-year, $5.6 million contract in 2016, with an AAV of $2.8 million. The Kings then signed him to a one-year, $1.5 million deal in the summer of 2019. So, Poile should have an idea of the price range he would be dealing with should he acquire and decide to keep Hutton.

The former Canuck would be a great replacement for any one of the three defensemen potentially leaving this summer in Hamhuis, Weber and/or Irwin, and he would be an upgrade over all three.

In the meantime, Hutton could help stabilize the Predators’ third pairing. He’s a reliable player on the blue line who doesn’t take many risks. His style would pair well with either Ekholm, Fabbro or even Hamhuis. Hutton has four goals and seven assists with the Kings, who rank 30th in the league for goals-for per game with 2.51. His plus/minus is even, which isn’t bad considering the Kings’ goal-differential is disastrous minus-44.

Hutton averages a little more than 18 minutes of ice time per game, which is probably more than what he would receive with the Predators, but it’s nice to know that he is capable of logging such minutes while still being a fairly reliable player.

A lot of factors will determine whether the Predators are buyers or sellers at the deadline. There are several players “available” who fit the team mould and Nashville has players who could be desirable to contenders and would provide a handsome return.

Whatever Poile decides to do come Feb. 24, the Predators need to commit. They either build for a successful season in 2020-21 or buy-in with a serious playoff push. Winning at least seven of every ten games might be the only way in, and new personnel may be the only way to achieve it this season.